The applicability of high-resolution mass measurements of optically trapped particles is currently limited by experimental constraints, with no access the lower picogram range. Here, the authors propose a broadly applicable optical balance to accurately weigh submicron aerosol droplets down to the p…

The ability to immobilize and manipulate single particles in air, liquid or vacuum makes optical trapping an interesting tool for applications in many scientific fields. When the mass of the trapped object is of interest, however, optical trapping seems to be at a disadvantage. Examples demonstrating how to measure the mass of an optically trapped microscopic object are few and far between, and they are typically limited only to rather specific particle types and setups with variable degrees of accuracy.

One approach to optical mass measurement treats the particle in the electromagnetic potential of the optical trap as a harmonic oscillator, whose oscillations are damped by the surrounding fluid. Like a mass on a spring, a particle will start to oscillate with a characteristic frequency, which depends on the particle’s mass, once it is pushed away from the point of equilibrium. Friction then lets the oscillations gradually die away. If, however, the system is perturbed periodically, the oscillation will stabilize and the particle’s mass can be inferred from the measured oscillation characteristics.

What sounds feasible in theory often meets with practical problems, such as the high damping of micrometer and sub-micrometer sized particles even in a gaseous medium. It can suppress the particle motion to an extent that makes it difficult to measure the oscillation accurately. Reducing the pressure of the environment could solve this issue, but this would not work for volatile particles. Another requirement for a broadly applicable method is the ability to determine the particle mass in situ, i.e. while it is observed in the trap, without the need for supplementary measurements outside the trap.

Our implementation of such an “optical balance” demonstrates how to overcome the limitations of overdamping. As an example, we measure the mass of trapped aqueous NaCl droplets in a nitrogen atmosphere at ambient pressure. We have been able to determine masses as low as 4 picograms with an accuracy better than 3%. With this performance optical mass measurements could even become possible in the liquid phase, where damping is typically 30 – 50 times higher than in a gaseous medium. The application of our optical balance to the liquid phase is not expected to reach the submicrometer particle size range we saw in the gas phase, but mass measurements of micrometer sized particles appear achievable. This size range encompasses, for example, most body cells and bacteria. Single cells and even viruses have been weighed in vacuum before, using other trapping techniques, but to the best of our knowledge no such studies have ever been performed in the natural environment, i.e. liquid water.

There are still important steps to take towards this goal, but each new feature discovered along the way increases the relevance of optical trapping to the scientific community.

Image of the trapped particle on a white paper sheet. Harmonic oscillation of the particle is induced, which is key to determine the particle mass. In this sequence, the optical trap is modulated at 1 Hz and 3 Hz. 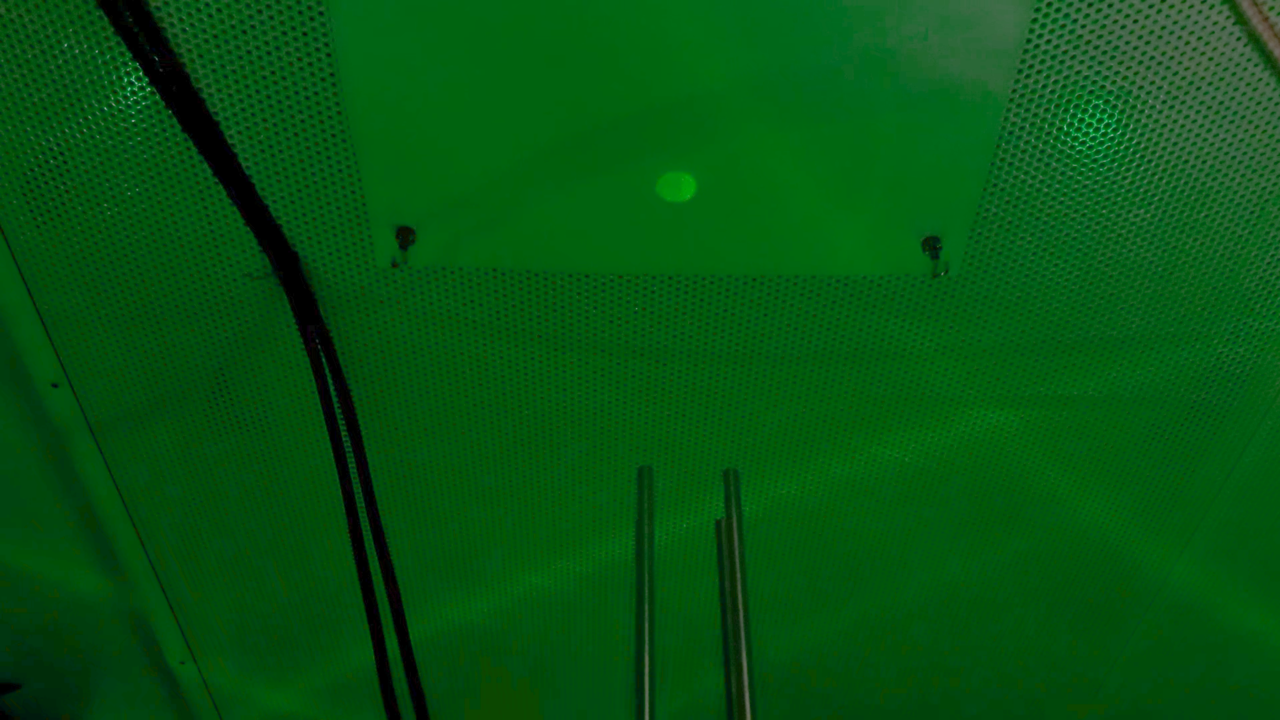