The Z-scheme photocatalytic system is promising for producing renewable energy by sunlight, but the optimization of multiple materials is challenging. Here, authors directly map out the photocatalytic activity on a microscopic scale by the clustering analysis for the time-resolved image sequence.

The technology for the energy conversion using sunlight is strongly expected due to the expansion of the energy demand. The photocatalyst can be used as a useful energy conversion device from solar to chemical energy and has been commercialized in the field of the air cleaner to decompose harmful chemicals in the atmosphere. In recent years, the photocatalyst is further expected to apply water splitting, namely the generation of hydrogen and oxygen from water. The artificial photosynthetic chemical process (ARPChem) has demonstrated a pilot plant for water splitting using printed photocatalyst panels. As a promising approach of photocatalytic water splitting, a combination of materials for hydrogen evolution and oxygen evolution, which is called ‘Z-Scheme’ has been expected for higher efficiency. (Fig. 1) Recently, a ‘Z-Scheme’ photocatalytic sheet with two materials bonded by an evaporated metal film has been developed and reached the world-record efficiency of 1.1 % as a solar-to-hydrogen efficiency (STH). Furthermore, TOTO corp. and the Univ of Tokyo has developed a large-scale printable photocatalytic sheet using a screen printing method with a capability of mass production, based on the concept of the photocatalytic sheet under the project of New Energy and Industrial Technology Development Organization (NEDO) and ARPChem, and the large-scale processed films showed 0.4 % of STH.

The evaluation of the photocatalytic materials has been made by the water-splitting efficiency or the photocurrent efficiency, which could provide an averaged efficiency in the whole region of the material. However, since the photocatalytic sheet is made of multiple mixed materials, it is essential to clarify the deactivation of the reactions due to the local defects and inhomogeneity. As shown in Fig.1, the photo-excited charges (election: e-, hole: h+) are used for the hydrogen evolution and oxygen evolution via the charge transfer at the interfaces in the ‘Z-Scheme’ photocatalyst. It is important to use these charges without losing the activity. Our group has recently developed a new microscopic technique called the pattern illumination phase microscopy (PI-PM) method, and we could find out that this method could provide information on the local activity of catalysts. we could collect all the charge responses pixel-by-pixel in the image sequence and applied the clustering analyses for the big data of the charge responses. And this information could distinguish the reaction activity on a photocatalytic sheet.

Rhodium doped strontium titanium oxide (STOR) and molybdenum doped bismuth vanadate (BVOM) were used for the hydrogen evolution and oxygen evolution photocatalysts, respectively. An indium tin oxide (ITO) was used as a binder and a mediator for charge transfer between two materials. They were printed as a photocatalytic sheet via a screen printing method. The performance of this photocatalytic sheet is shown in Fig. 2(a), which shows the amount of hydrogen and oxygen evolution during the visible light irradiation. The distribution of STOR, BVOM, and ITO is shown in Fig.2(b), and the nanoparticles were well dispersed, but aggregated parts were found in some places.

The water splitting mechanism in the ‘Z-Scheme’ photocatalyst is explained in Fig. 1. Due to the visible light absorption at STOR (hydrogen evolution), and BVOM (oxygen evolution), the electrons and holes are excited in each material, and hydrogen and oxygen are generated at STOR and BVOM, respectively. The remaining electrons and holes are consumed by the charge transfer via the charge mediator, ITO, and the whole charge reactions can be circulated.

The reaction mechanism in the photocatalyst has been discussed from the measurement of photocurrent or charge dynamics measured with a high time resolution. However, an averaged response of charges on the whole sample can be obtained but the information of local charges in the catalysts have not been clarified, and no spatial distribution of charges could be obtained. This has been a crucial drawback for understanding the reaction mechanism especially for the ‘Z Scheme’ sample, where multiple chemical species were mixed and spatially distributed.

Thus, we examined the local charge responses at each position of a photocatalytic sheet and obtained the in-plane distribution of charges by the newly developed PI-PM method. The analytical method is described in Fig. 3. The image sequence with a nanosecond time resolution was obtained; since the charge responses are included at each pixel in the images, the charge response with ~200 data points was extracted. In the image of 150x100 pixel region, for example, 15,000 responses of charges, namely 3,000,000 numbers were collected as big measurement data. The responses were categorized via the spectral clustering method, one of the informatics calculations, and they were categorized into several groups based on the intensities and response shapes. The category was returned to each image position, and the image can be colored based on the different categories of charges.

It is obvious that this methodology has a strong advantage over a conventional method to understand the catalytic activity on a surface, and an example is shown in Fig.4. When we measured an averaged charge response for a ‘Z-Scheme’ photocatalytic sheet, the charge response was difficult to understand due to the overlap of multiple different responses. When this sample was measured by the PI-PM method, we found that the averaged response could be decomposed into three different responses. Based on the mechanistic studies, the red response corresponds to the one for the high activity to the water-splitting, and the blue and green responses correspond to the ones for the charge deactivation due to the properties of the materials. When the corresponding regions were returned to the original image, we could successfully map out the active/inactive regions for water-splitting on the sample surface. One of the inactive regions corresponded to the aggregation of STOR particles, but most of the area for this ‘Z Scheme’ photocatalytic sheet showed the ‘red’ region, indicating that the water-splitting proceeds smoothly.

The water-splitting technology using the photocatalysts has rapidly progressed, especially intended for various chemical syntheses from the generated hydrogen. In recent years, the research has moved its phase into not only the search for new materials but also the optimization of the large-scale design and processing. So far, there have been no analytical methods to examine the activity on a microscopic scale on a catalysis surface, and the newly developed methodology could play a vital role in searching and optimizing the materials, films, and devices. At present, the panel size of the photocatalytic sheet has reached a scale of 1 m2 and is further expected to increase the size. To deploy the plant of the solar hydrogen generation, there is an emergent need for the inspection and management system for the plant. (Figure 5) In the next step, they aim to modify this method for a large area and automatic measurement and will be commercialized as inspection equipment in 5 years. 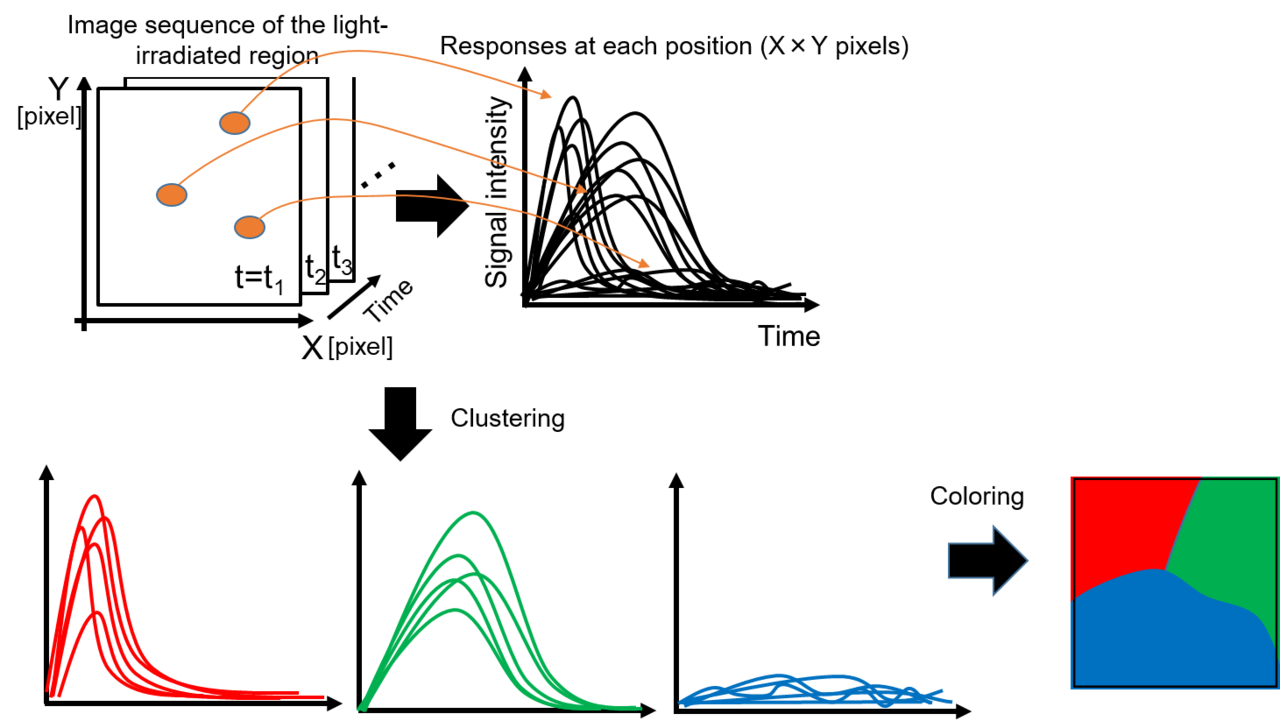 A new microscopic technique could reveal the active reaction sites for photocatalytic water splitting by sunlight. The origin of the photocatalytic reactions was recognized and visualized on a printable photocatalytic sheet by spotting the local charge responses from the informatics image analyses.