A community from Nature Research
Contributor
After the Paper

Since its publication a little more than two years ago, our paper has drawn the attention of researchers around the world and received 97 citations according to Google Scholar (Nature Communications vol 9, 4661, November 2018, https://www.nature.com/articles/s41467-018-07052-w). As of December 2019 it was in the top 25% of all research outputs ever tracked by online attention metric Altmetric.

This work was a significant milestone in my scientific career, especially shaping my interest in neuromorphic computing. In July 2018, just a few months before we published our VO2 neuron work, we were awarded project funding through DARPA’s Foundations Required for Novel Compute (FRANC) program. Our company-sponsored VO2 neuron research helped us win the FRANC award for a project with a goal to develop an all-memristor neuromorphic processor, on which I honorably served as the principle investigator.

The FRANC program seeks innovations that go beyond von Neumann compute architectures to tackle the memory bottleneck – a limitation of computer performance by time and power required to shuffle data between processing logic and system memory. Our approach is to combine novel biomimetic VO2 active memristor spiking neurons with passive memristor synapses to build a neuromorphic processor that could eventually reach human brain levels of energy efficiency, neuron and synapse density, and dynamic complexity. If successful, this would lead to a first demonstration of an all-memristor neuromorphic computer architecture that operates like a part of a brain, forgoing transistors. Within the first few months of the program, we successfully designed and simulated an all-memristor spiking neural network that can compute convolutions for image classifications – the main workload of today’s AI inference hardware. The simulated energy efficiency metric for an all-memristor network consisting of 60 VO2 neurons and 500 memristor synapses is merely 0.61 nJ for every bit of input image, which is 10 times better than the current state-of-the-art neuromorphic processor (https://eri-summit.darpa.mil/docs/ERIsummit2019/posters/poster5.pdf).

Despite this great promise, we still have a long way to go before reaching the full potential of an all-memristor neuromorphic brain-inspired cortical compute. From the device and materials engineering perspective, a major challenge is to integrate passive memristor synapses with active memristor spiking neurons, and ensure both technologies work together to make the best of each technology’s scalability, energy efficiency, and high-performance.

Due in part to this work, I was elevated to IEEE Senior member in 2019. I received an invitation from the organizers of the preeminent IEEE International Electron Devices Meeting (IEDM) in San Francisco to speak in the Emerging AI Hardware Focus Session in December of the same year. After hearing a full day of invited talks, I realized that the community’s attention is still focused on the current generation of AI based on deep convolutional neural networks and related architectures, while few researchers are looking into approaches toward the next wave of AI. Despite the seeming mismatch of the topic, my presentation was well received and I stayed in the room for over 30 minutes answering keen questions.

A somewhat bold postulation I raised in my talk was that perhaps human-level intelligence may not be achieved by interconnected networks of simple and uniform units, no matter how large the networks could be built. One would need complexities—in the context of dynamics—at the building-block level to achieve the so-called strong and broad AI – systems that self-improve through learning based on raw input and can be applied to many contexts. After witnessing as many as 23 biologically plausible neuron dynamics in VO2 memristor neuron emulators, my hope was reinforced that exploiting the rich neuronal dynamics could be a key to enabling the next wave of AI. Fulfilling this dream requires new algorithms as well as data set and benchmarking methods that can take full advantage of neuromorphic benefits, such as temporal information processing and immunity to noises.

In November 2019, a year after our Nature Communications paper was published, a multidisciplinary team from the departments of chemistry, materials science, electrical, and computer engineering at Texas A&M University and NASA’s Ames Research Center wrote a comprehensive review article published by Trends in Chemistry (https://doi.org/10.1016/j.trechm.2019.07.005). The review was spot on regarding leveraging dynamic switching and electronic instabilities in transition metal oxides for brain-inspired energy-efficient computation. One of the coauthors, Professor R. Stanley Williams, told me that our VO2 memristor neuron paper inspired their review. As Stan is a pioneer in this field, who demonstrated the very first spiking neuron emulator using NbO2 memristors, we do not take his commendation lightly. One of the materials engineering issues he pointed out is the need for a material that has a goldilocks metal-insulator transition temperature - lower than that of NbO2 (1050–1100 K) and higher than that of VO2 (340 K). Although VO2 is six times more energy efficient than NbO2 in terms of free-energy cost of switching, its transition temperature being lower than that of boiling water makes the circuit easily latch up in a hot environment. The review also delineated an abundant design space for optimizing intrinsic material properties for desired extrinsic device characteristics. Rare-earth nickelates and ternary vanadium oxides are two promising material systems worth further investigation.

This work is a small step toward the grand goal of neuromorphic computing. Our effort focused on emulating brain gray matter, i.e., neuron function. Replicating white matter—massively parallel interconnect—remains a significant gap to fill. Today’s microprocessors are two-dimensional in nature and require approximately ten interconnect layers for accessing a single layer of CMOS transistors fabricated on monolithic silicon substrates, which handicaps the volumetric density of the gray and white matter. Since active memristor neurons and passive memristor synapses are based on thin-film materials, one can envision a quasi-three-dimensional interconnect by stacking alternatively neuron and synapse layers, in a manner similar to the multi-layered cerebral cortex (see for example, US patent 10,541,274).  At the end of the day, neuromorphic technology is not just about emulating the brain functions, but about solving practical computational problems proven hard for even the most advanced silicon electronics. 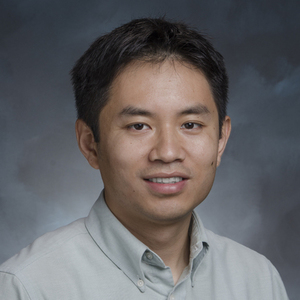 Tyler A. Cochran
Towards a scanning probe microscope with multiple and different tips
Contributor Nature Electronics
After the Paper