The large field confinement and slow-light effect near the epsilon-near-zero (ENZ) frequency of the light-emitting material itself is combined with plasmonic cavities, to greatly enhance the “forbidden” two-plasmon spontaneous emission (2PSE) process.
Yuan Meng
PhD, Washington University in St. Louis
Follow
Like Liked by Daniel T Payne and 3 others
0

Plasmonics involves the engineering of light-matter interactions and has range of possible uses in the study of quantum phenomenon, but efficient plasmonic sources are required. The authors report a method to achieve efficient two-plasmon spontaneous emission using an epsilon-near-zero material with…

Plasmonics is a vibrant field of research exploiting the light-matter interaction in metallic nanostructures. Plasmonic cavities can provide deep subwavelength light confinement, opening up new avenues for enhancing the spontaneous emission process towards both classical and quantum optical applications. Conventionally, light cannot be directly emitted from the plasmonic metal itself, remaining a grand challenge to generate single- or entangled-surface plasmon polaritons (SPPs) directly from the plasmonic metal.

Two-photon emission (TPE) refers to the simultaneous emission of two photons during a radiative transition process. Recent researches suggest TPE rate may be selectively enhanced by the Purcell effect, as a promising approach to generate entangled photon pairs in semiconductors (for it emits two photons with intrinsic energy conservation and time concurrence) [1, 2]. Here, researchers propose a scheme to achieve efficient two-plasmon spontaneous emission (2PSE), by employing a degenerately doped semiconductor ENZ thin film that simultaneously serves as the light-emitting medium and the plasmonic cavity, as illustrated in Fig. 1. The proposed structure consists of a 50-nm-thick degenerately doped InSb film sandwiched between two AlSb layers, which are known to support SPP modes in the mid- and far-infrared.

The performance of the resultant devices are summarized as Fig. 2 (see the original article & its supplementary info &  for details). In conclusion, ultrafast and tunable 2PSE is theoretically shown to be potentially realized in a nonlocal ENZ film [3, 4], by spatially and spectrally matching 2PSE with highly confined SPP modes. Similar concepts can be extended to other semiconductors, 2D materials, and superconductors supporting Josephson plasmons. The 2PSE lifetime could be reduced from tens of milliseconds to several nanoseconds, comparable to the one-photon emission rate. Furthermore, we show that the optical nonlocality may largely govern the optical response of the ultrathin ENZ film. Efficient 2PSE from a doped semiconductor film may provide a pathway towards on-chip entangled light sources, with an emission wavelength and bandwidth widely tunable in the mid-infrared. 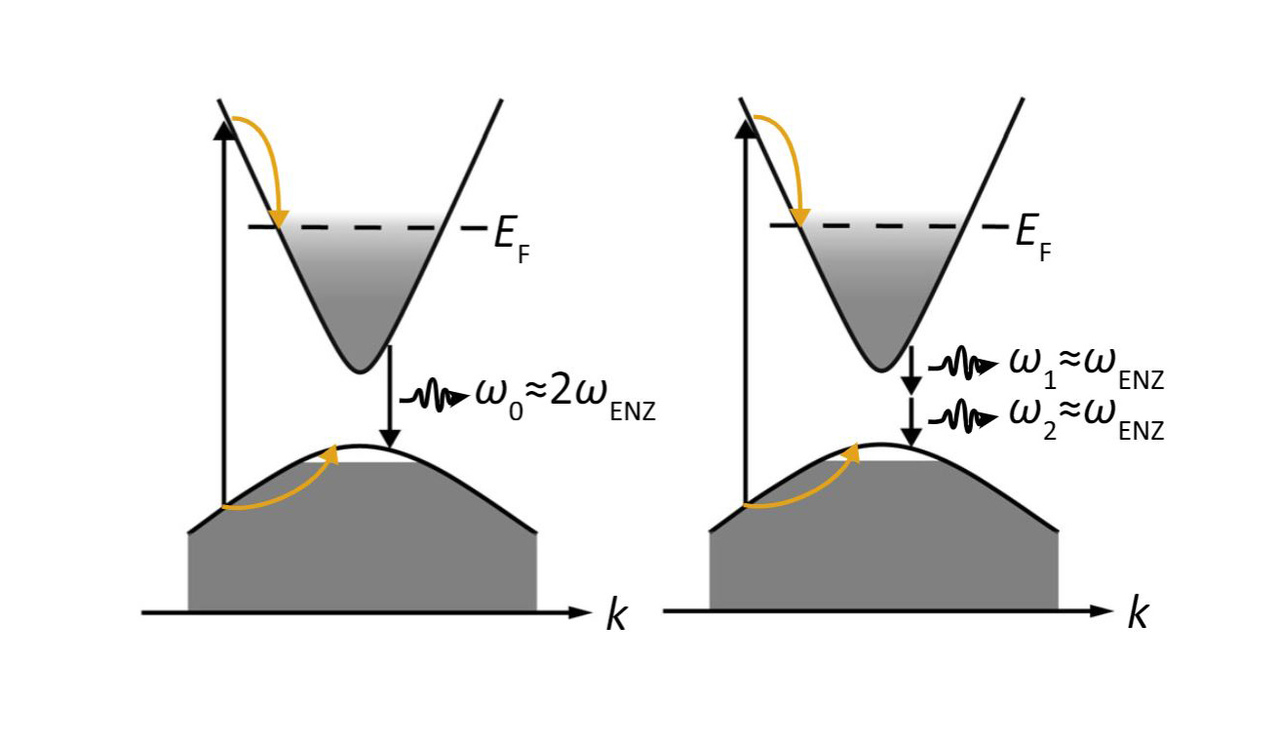 The large field confinement and slow-light effect near the epsilon-near-zero (ENZ) frequency of the light-emitting material itself is combined with plasmonic cavities, to greatly enhance the “forbidden” two-plasmon spontaneous emission (2PSE) process.