The Effect of Water on Colloidal Quantum Dot Solar Cells

We reveal that ambient water plays an essential role in surface hydroxylation, epitaxial QDs fusion, and trap behavior in QD photovoltaics. By manipulating the deposition techniques and film morphology, the side effect of ambient water on CQD solar cells can be effectively suppressed.

Originated from surface sensitivity of colloidal quantum dots (CQDs) towards ambient water, the surface hydroxylation and its links to trapping behavior in CQD films have been widely observed, which, to date, is a widely concerned issue in building high-efficient CQD photovoltaics. Tremendous efforts have been put to suppress surface hydroxyls. However, the trapping mechanism is still unclear. The strong bonding between surface hydroxyls and atomic Pb on the polar facet fails to explain the hydroxyl-related trapping mechanism by the traditional non-stoichiometry issue in CQDs, namely, the formation of surface vacancies. Thus, it remains an urgent challenge to understand the hydroxyl-related trap mechanism and its effect on the performance of CQD electronics.

It has been widely observed in the nature that the hydroxylated surfaces allow the adsorption of ambient water by hydrogen bonding, forming a mixed OH+(H2O)n configuration on solid surfaces. The large specific surface area makes CQD more vulnerable to the ambient atmosphere than the bulk materials. However, the landscape of water adsorption in hydroxylated CQD has been ignored so far. Thus, the investigation of surface adsorbed water may shed new light on surface chemistry and the mystery of hydroxyl-induced device deficiency in PbS CQD solar cells.

In this study, H-bonded water is identified on the partially hydroxylated surface of PbS CQDs by systematic experimental and theoretical studies as shown in Figure 1a. The results indicate that the adsorbed water could govern the temperature-dependent change of CQD surface chemistry through water desorption, hydroxylation, and dehydration process. More importantly, the transmission electron microscopy (TEM) in Figure 1b-f and the molecular dynamic (MD) simulations in Figure 1g-h suggest that the water molecules could potentially work as H-bonded bridges between CQD, promoting the subsequent CQD close attachment and fusion. The CQD fusion triggered by ambient water leads to inter-band traps in atomic passivated CQD, significantly enhances the Stokes shift and reduces the carrier lifetime in CQD solids (Figure 1i-j).

We coincidentally found that the deposition technique of CQD solids has a critical impact on the film stabilities under humid ambient. The CQD film achieved by the meniscus-guided coating technique (MGC) shows more compact film morphology, which improves the device performance and, at the same time, suppress the negative effect of ambient water on solar cell performance. We believe our works not only elucidate hydroxyl involved CQD surface chemistry, but also achieve a comprehensive understanding of the impact of ambient water on CQD solar cells, which may provide general insight into the practical manufacturing of stable CQD based electronics under ambient conditions. 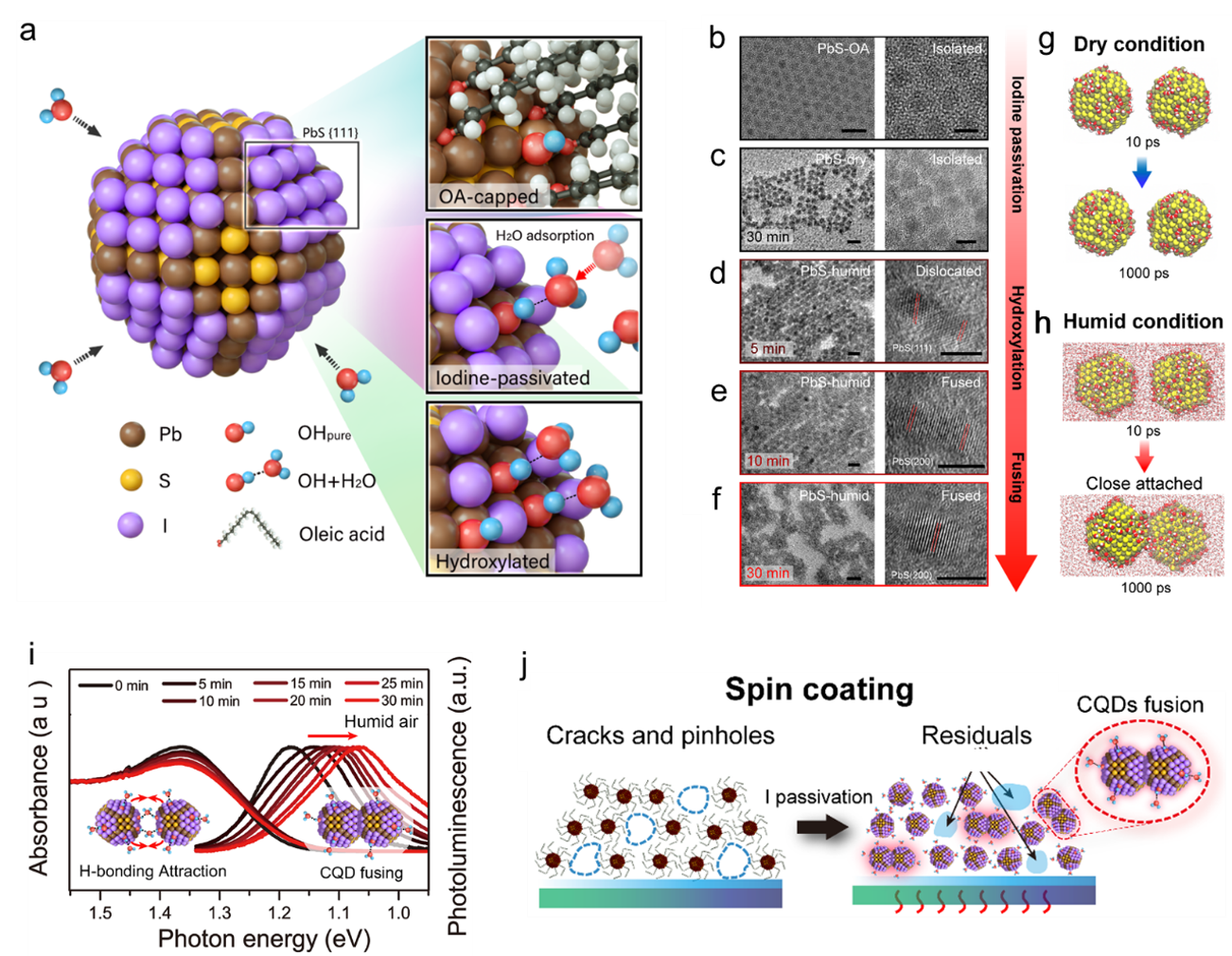 Figure 1. a Schematic representation of the surface conditions of octahedral PbS CQDs. The ideal model of PbS CQD dot with atomic halide passivation is shown on the left. The proposed surface conditions on the Pb-terminated {111} facet are zoomed on the right. Top: the OA-capped facet with partial surface hydroxylation introduced in the synthetic process; Medium: Atomic iodine-passivated facet after ligand exchange; Below: the aggravation of surface hydroxylation followed by water adsorption under humid air. b-f The TEM images of PbS CQDs prepared under different conditions. The samples were prepared on carbon meshes by (b) droplet deposition (c) followed by ligand exchange and annealing process at 85 °C under dry air, (d-f) or under humid air with different annealing time. The scale bars: left column 10 nm and right column 5 nm. g-h Snapshots of two CQDs with initial surface hydroxyls covered on {111} facet with a gap distance of 1 nm at 300 K after10 ps and 1000 ps under (g) vacuum or (h) humid environment. The ambient water could work as H-bonding bridges, which significantly promote the close attachment of neighboring CQDs. i The change of absorbance and PL spectra of spin-coated PbS-I CQD films versus heating time under dry and humid air. j The illustration of the meniscus-guided coating and the spin-coating process for the preparation of PbS CQD solids. The densely packed CA films show the self-draining effect against ambient water intrusion.

These results were recently published in Nature Communications: