Gallium-based liquid metals have attracted increased attention in the field of soft and flexible electronics due to their unique physical properties, such as high conductivity, fluidity at room temperature, low toxicity, and self-healing ability. A crucial and inescapable step before applying liquid metal is to shape it into the desired configuration. Unfortunately, the large surface tension and high mass density of liquid metal make forming arbitrary three-dimensional (3D) dangling structures a challenging task, which is useful and necessary for further applications of liquid metal in integrated electrical components, induction coils, and flexible interconnects.

Many efforts have been made to overcome these weaknesses for shaping liquid metal out of plane, including 3D-freeze printing, adding fillers to alter the rheological properties of liquid metal for 3D printing, and electrochemical oxidation to form an oxide skin out of the printed filaments. However, none of them helps to shape 3D dangling structures of liquid metal filaments with large aspect ratio, high shape fidelity and high resolution, and it is hard to maintain and balance the high conductivity and deformation ability of liquid metal.

In this study, we developed a suspension printing strategy for direct deposition of galinstan-based liquid metal into 3D dangling structures with high shape fidelity and spatial resolution (~150 um). A physical illustration of the liquid metal printing process and the formation of continuous filaments is shown in Figure 1.

More importantly, the printed liquid metal structure within the support bath can become a usable flexible electronics without complex post-processing other than exposure to ultraviolet (UV) light. As shown in figure 2a, the subsequent photo-curing of AAm/nanoclay suspension works as a resilient outer packaging, giving rise to a ~500% tensile deformation for liquid metal-hydrogel composite. As a demonstration, we printed the liquid metal ink as dangling structures in millimeter scale (i.e., helix and double-layered line structures) shown in Figure 2b and d, which are impossible with traditional 3D printing strategy. After the support bath was photo-cured, the printed liquid metal structure embedded in the PAAm/nanoclay hydrogel lit the LED light successfully due to its low resistance, indicating the potential application of fabricated liquid metal-hydrogel electronics in 3D interconnects.

In addition, the 3D helical structures of printed liquid metal embedded in the PAAm/nanoclay hydrogel were prototyped as a resonant sensor for monitoring ~50% tensile/compression strains, which shows the potential of wireless pressure monitoring. Furthermore, the feasibility of fabricated liquid metal-hydrogel electronics with 3D dangling structures as electromagnetic generators, another possible application, was also demonstrated in this work. A liquid metal coil printed in the PAAm/nanoclay hydrogel generated an induced voltage of 10 mV through magnet movement, which is comparable to a copper coil with similar geometry.

This suspension printing strategy should be promising for manufacturing arbitrary 3D dangling structures of liquid metals in the flexible hydrogel, as well as soft and resilient electromagnetic devices of liquid metals. 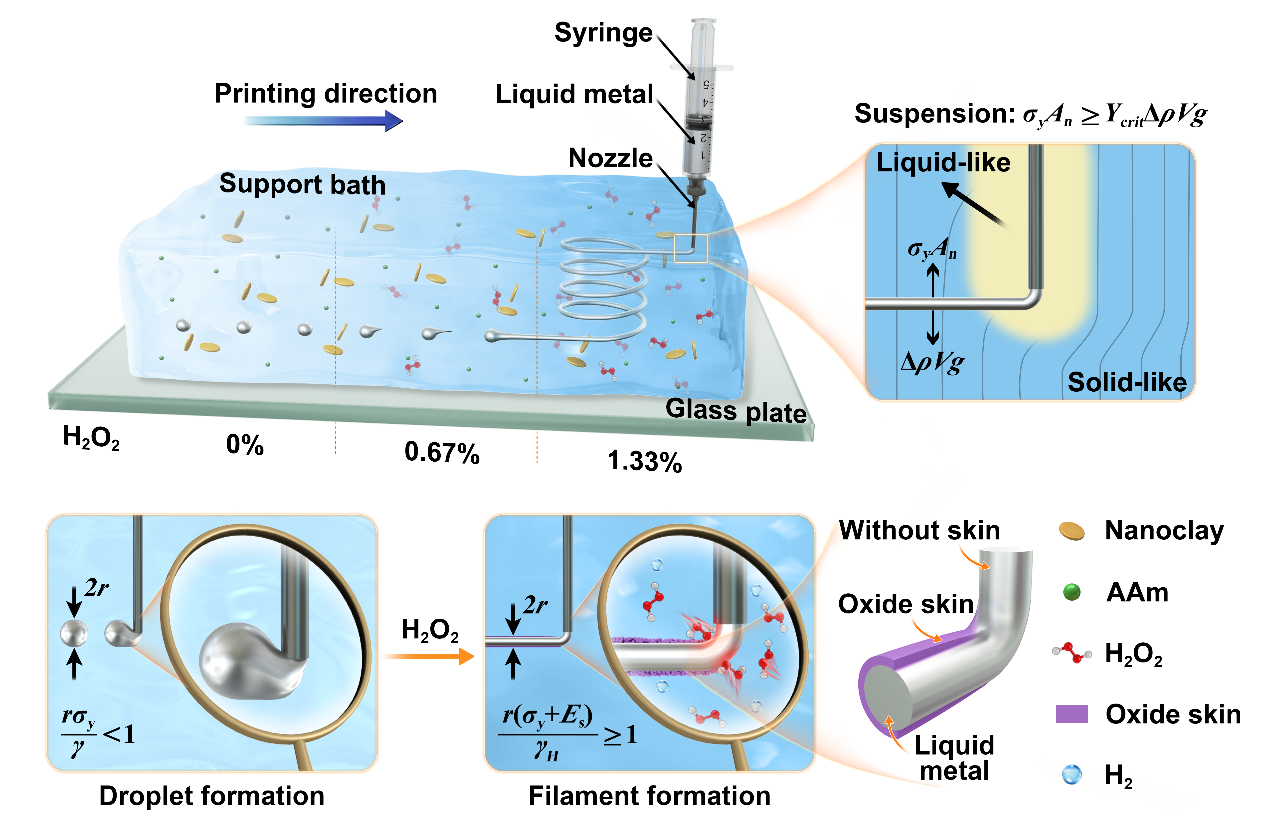