We find that shear banding in bulk metallic glass could be suppressed by electromigration and the homogeneous regime of plastic deformation could be expanded.

The plastic deformation mechanism of metallic glasses (MGs) is intriguing for the absence of crystalline defects in amorphous structures. To understand this issue, the deformation regime of MGs since their discovery was depicted on a map in temperature-strain rate space. Generally, MGs exhibit inhomogeneous deformation at room temperature, while exhibit homogeneous deformation at elevated temperatures (above ~0.8Tg, where Tg is the glass transition temperature) if the loading rate is low enough. The inhomogeneous deformation of MGs results from the formation of extremely localized shear bands, which nucleate through the self-assembly of the phenomenological deformation units in MGs called shear transformation zones (STZs)1. A schematic picture of STZ is shown in Fig. 1a.The self-assembly of STZs into shear band is supposed to be propelled by the interactions between STZs constrained by the surrounding elastic matrix along the plane with maximum shear stress. On the other hand, the homogeneous plastic deformation at elevated temperatures and at low enough strain rates is because of the increased atomic mobility which relaxes the long-range interactions between STZs and prevents the self-assembly of STZs into shear bands, i.e. suppresses shear banding.

Several years ago, we noted the electromigration effect, i.e. when an electric current passes through a conductor, the electrons scattered by the conductor atoms promote atomic diffusion in the direction of electron transport via what is called as the electron scattering force, as illustrated in Fig. 1b. This enhanced atomic diffusion under current charge2 functions analogously to the classical free volume-based flow mechanism in BMGs3. More importantly, it was found that geometrically constrained atoms experience greater electron scattering force than more freely diffusing atoms4. This result predicts that the atomic diffusion in the elastic matrix of STZ would be preferentially promoted by the electron scattering force. With the elastic matrix motivated by electromigration, the long-range interactions between STZs would be relaxed and the self-assembly of STZs1 into shear bands will be suppressed. As a result, BMGs, aided with electromigration, will exhibit homogeneous plastic deformation, as illustrated in Fig. 1c, even in the temperature-strain rate map where the inhomogeneous regime dominates, i.e, the electromigration expends the regime of homogenous plastic deformation

In our paper, by applying a pulsed electric current of a density of 33 A∙mm-2 on a Zr55Cu30Al10Ni5 (at%) bulk Metallic glass (BMG) enduring uniaxial tension at a relatively high strain rate 2×10-4 s-1, as shown in Fig. 2, we successfully suppress shear banding in the BMG and observe homogeneous elongation and necking at the temperature far below Tg. By systematically excluding the role of Joule heating effect of the pulsed current, the main cause for the suppression of shear banding is ascribed to the biased atomic diffusion by electromigration which dynamically rejuvenates the BMG and expands its homogeneous regime of plastic deformation. These results would help to understand the origin of plasticity of glassy materials. 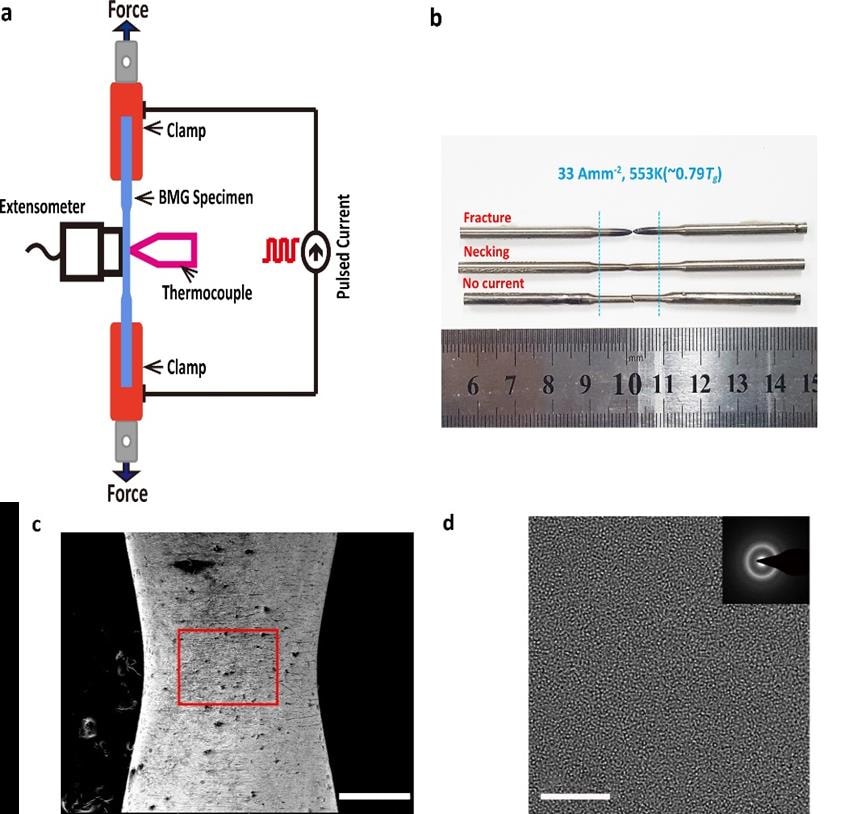 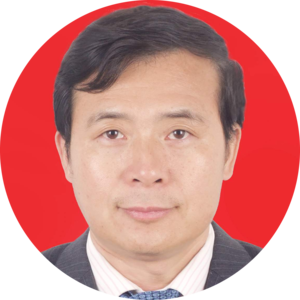