Low-valent zinc clusters, though exceedingly rare, are appealing synthetic targets because there is evidence that they may show unconventional chemical and physical behavior. Here, the authors obtain a large heterometallic zinc-bismuth cluster anion and discover that it bears a metalloid {Zn12} core…

Multimetallic clusters are molecular, strictly monodisperse nanosized objects that are composed of two or more types of metal atoms. Generally, such molecules may be shielded by organic ligands, or − as in our case – they do not exhibit any ligands, but possess an anionic charge and crystallize in corresponding salts that are soluble in polar solvents. The absence of a ligand shield enables direct access to the metal atoms in solution, which makes these compounds promising objects for bond activation of catalysis with defined metal nanomaterials. Moreover, such multimetallic clusters show a broad range of electronic structures and bonding properties, ranging from electron precise bonding, through highly delocalized interatomic connections, to superatomic situations and all-metal aromaticity.

For a sustainable approach towards multimetallic clusters, it is highly desired that the metal types used are of low toxicity or non-toxic, and that the synthesis is based on a systematic and highly reproducible strategy. Both was realized in our work, in which we report the directed access of a molecular K/Zn/Bi-based cluster via heterometallic cluster synthesis that was developed by systematic investigations of potential elemental combinations in corresponding reactions in solution.

As a result of our studies, we found that the ternary solid K5Ga2Bi4 is able to reduce ZnPh2 to form the heterometallic cluster [K2Zn20Bi16]6–, which crystallizes from 1,2-diaminoethane (en) in the presence of the cation sequestration agent 4,7,13,16,21,24-hexaoxa-1,10-diazabicyclo[8.8.8]hexacosan (crypt-222) upon layering with toluene as its salt [K(crypt-222)]6[K2Zn20Bi16]. The compound readily re-dissolves in en or dimethylformamide (DMF). It comprises an essentially zero-valent situation at the Zn atoms in the cluster center that are part of a unique {Zn12} assembly. The latter is embedded in a 24-mebmered macrocyclic {Zn8Bi16} architecture, which may be viewed as a structural variant of an inorganic porphine-related macrocycle. Overall, the {Zn20Bi16} bimetallic nanostructure is oblate in shape, and some of the inner Bi atoms additionally serve to coordinate two K+ cations above and below the disk-like object to form the overall [K2Zn20Bi16]6− cluster anion.

Besides its extraordinary molecular architecture, the cluster exhibits distinct electron-delocalization that produces a diatropic ring current of 0.43-7.0 nA/T − obtained from a DFT study, upon integration along a plane perpendicular to the molecular plane and parallel to the external magnetic field. Remarkably, this is about a fifth of the ring current calculated for porphine (25.4 nA/T at the same computational level) or zinc porphyrine (25.1 nA/T) and about a third of the value calculated for benzene (11 to 15 nA/T) – indicative of all-metal aromaticity to be present in this uncommon, non-planar molecule.

We envisage using this monodisperse metal nanocluster, with its heterometallic architecture and its uncommon electronic features, in reactivity studies and eventually nano-heterocatalysis. 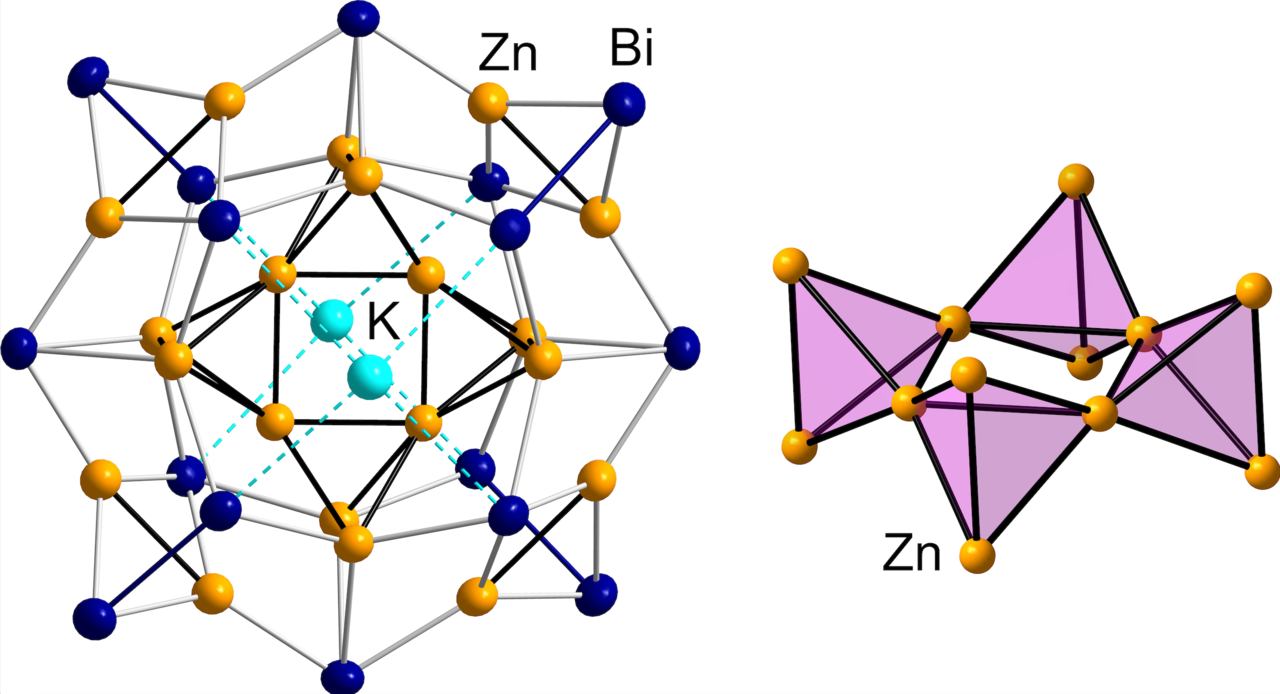