We exploited the ionic transport in the human skin to construct skin-electrode iontronic interfaces for pressure sensing, allowing possible applications of detecting physiological signals from the human body and the recovery of sensory functions for patients with tactile dysfunction.

The human skin is the largest organ covering the body. Sensation is one of the most important functions of the human skin—the skin has tons of nerve endings that can respond to physical stimuli, such as touch, pressure, and vibration. However, people may lose their sensory functions when the nerve is damaged, or when they are suffered from diseases such as diabetes, and thus epidermal devices that can help patients recover the sensory functions are needed.

In addition, there is a great need for electrodermal devices to capture the physiological information of the skin, and this has sparked immense scientific and industrial interests. Existing electrodermal devices such as e-skins, however, are designed without considering the special biological and electrical features of the human tissues. The current form of e-skins often takes a layered structure of two electrodes sandwiching a layer of artificial functional material (such as a piezoelectric layer, or an ionic gel) that often causes challenges in on-skin applications, including toxicity, dehydration, and poor breathability. A new principle for epidermal sensing utilizing a much simpler structure without employing any artificial sensing materials is thus desired.

Chuan-Fei Guo, a PI at the Southern University of Science and Technology (SUSTech), has worked deeply on e-skins. His group uses an ionic gel as the active layer in capacitive sensors. The ionic layer forms an electric double layer (EDL) at the ionic gel-electrode interface, for which the separation between the negative and positive charges is ~1 nm, and thus the capacitance density is several orders of magnitude higher than that of traditional capacitive-type pressure sensors. One day, Dr. Guo raised a question: is it possible to use the human skin, a natural ionic conductor, to replace the synthesized ionic elastomers for epidermal pressure sensing? This would eliminate the use of artificial ionic materials, which often have toxicity and high cost.

A collaborative team between SUSTech (professor Chuan-Fei Guo’s group) and Massachusetts Institute of Technology (professor Nick Fang’s group) soon tried this idea in experiment and it worked as expected. A sensory structure was constructed based on the skin-electrode interface for highly sensitive, submillimeter spatial-resolution pressure sensing. The skin-electrode mechanosensing structure (SEMS) simply consists of the skin, one or a set of sensing electrodes, and a counter electrode. The sensing electrode has a microstructured surface that deform sensitively to mechanical stimuli, while the counter electrode is highly conformable to the skin and has no response to pressure. When touching the sensing electrode, the skin-electrode interface has an increased contact area, and thus the capacitance increases. Note that such a simple “electrodes-on-skin” configuration has been widely applied in electrodermal signal recording and stimulation (such as electrocardiogram), but has not yet been used in tactile sensing.

The SEMS presents high sensitivity and ultrahigh signal-to-noise ratio because of its iontronic nature. It is so sensitive that it can detect tiny physiological signals such as fingertip pulse waves, which can otherwise hardly be detected using existing e-skins. It is also exciting that the SEMS is immune to noise artifacts with body motion, and thus we expect the device to find wearable applications to enable long term monitoring of vital signals such as pulse irregularity.

Compared with existing e-skins, the SESS does not need any artificial ionic materials, and does not require elaborated packaging processes. This simple sensing structure can also be easily incorporated into a textile as wearable electronics, demonstrated by a smart glove for high-resolution pressure mapping during hand gripping or manipulation. The SEMS based wearables hold great promise for the recovery of patients with paralysis or sensory dysfunction. 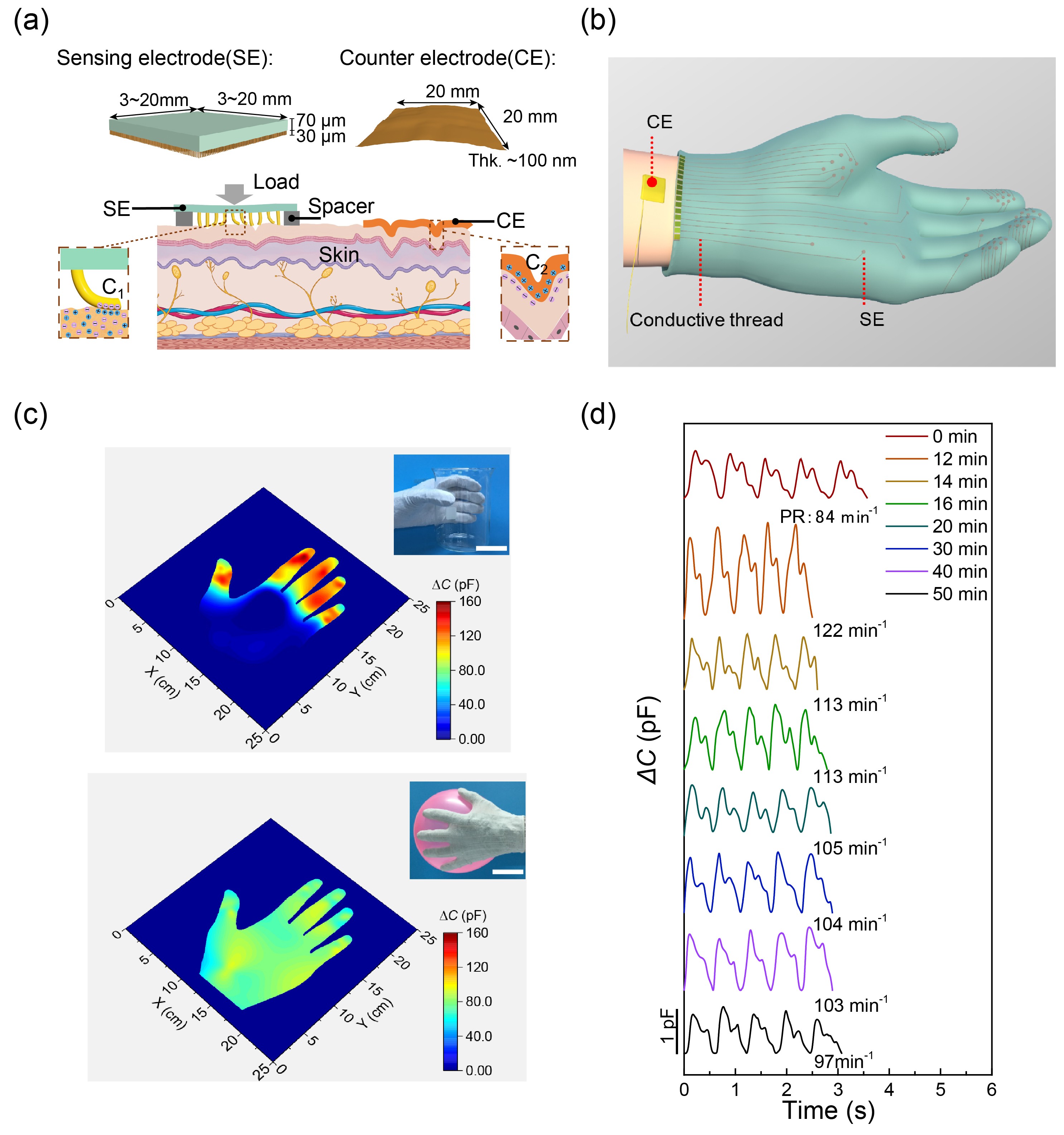 Fig.1 | (a) Mechanism of skin-electrode mechanosensing structure (SEMS). (b) SEMS-based smart glove. (c) Capacitance mapping of holding a beaker and a balloon. (d) Recorded fingertip pulse during the test from a human subject who performed 10 minutes of exercise and back to rest state for 40 min.

This novel sensing mode is also expected to be applicable to other tissues since biotissues are mostly ionic hydrogels. Therefore, the concept can be extended as “tissue-electrode mechanosensing”, which may find a wide range of applications in the sensing of physiological signals in human body.