Graphene folds, a 3-layer thick ribbon-like structure, are always present in graphene films grown on metal foil substrates by chemical vapor deposition at high temperature due to the mismatch of thermal contraction between the film and the metal substrate. That is, after growth at temperatures such as around 1320 K, it is necessary to cool the foils back to room temperature, and when doing so, the foil contracts much more than the graphene would by itself, and this introduces compressive stress at the graphene-metal interface. This stress buildup can be “released” in certain regions by deadhesion of the graphene from the metal foil at the interface. The presence of folds was found to degrade the performance of graphene field effect transistors (GFETs) by decreasing the carrier mobility. They also likely decrease the thermal conductivity and the mechanical strength of graphene.

Our group has been working on the growth of adlayer-free single-layer and single crystal graphene films on Cu(111) foils (Advanced Materials, 2019, 31(35): 1903615) and separately also on Cu-Ni(111) foils with “low” Ni concentrations (less than 10 at.%; ACS Nano, 2018, 12(6): 6117-6127), and we observed that the graphene folds are formed parallel to each other with a certain range fold widths and separations between neighboring folds. On polycrystalline metal foils one has a seemingly random distribution of wrinkles, but the single crystal foils “generated” (in our prior work) these parallel folds, without wrinkles being present. Our discovery of these long and parallel folds through our use of home-made single crystal metal foil substrates allowed the “strain released” in the graphene film by folds to be quantified.

By a series of ‘cycling’ experiments as described in our paper in Nature (https://doi.org/10.1038/s41586-021-03753-3), we discovered that graphene folds form at a relatively high temperature (above 1030 K) for growth on Cu(111) foils using methane and hydrogen, and when cooling from the growth temperature (1320 K) to room temperature. So, we proposed that decreasing the growth temperature to about 1030 K or below could be a good way to obtain CVD graphene with no folds. 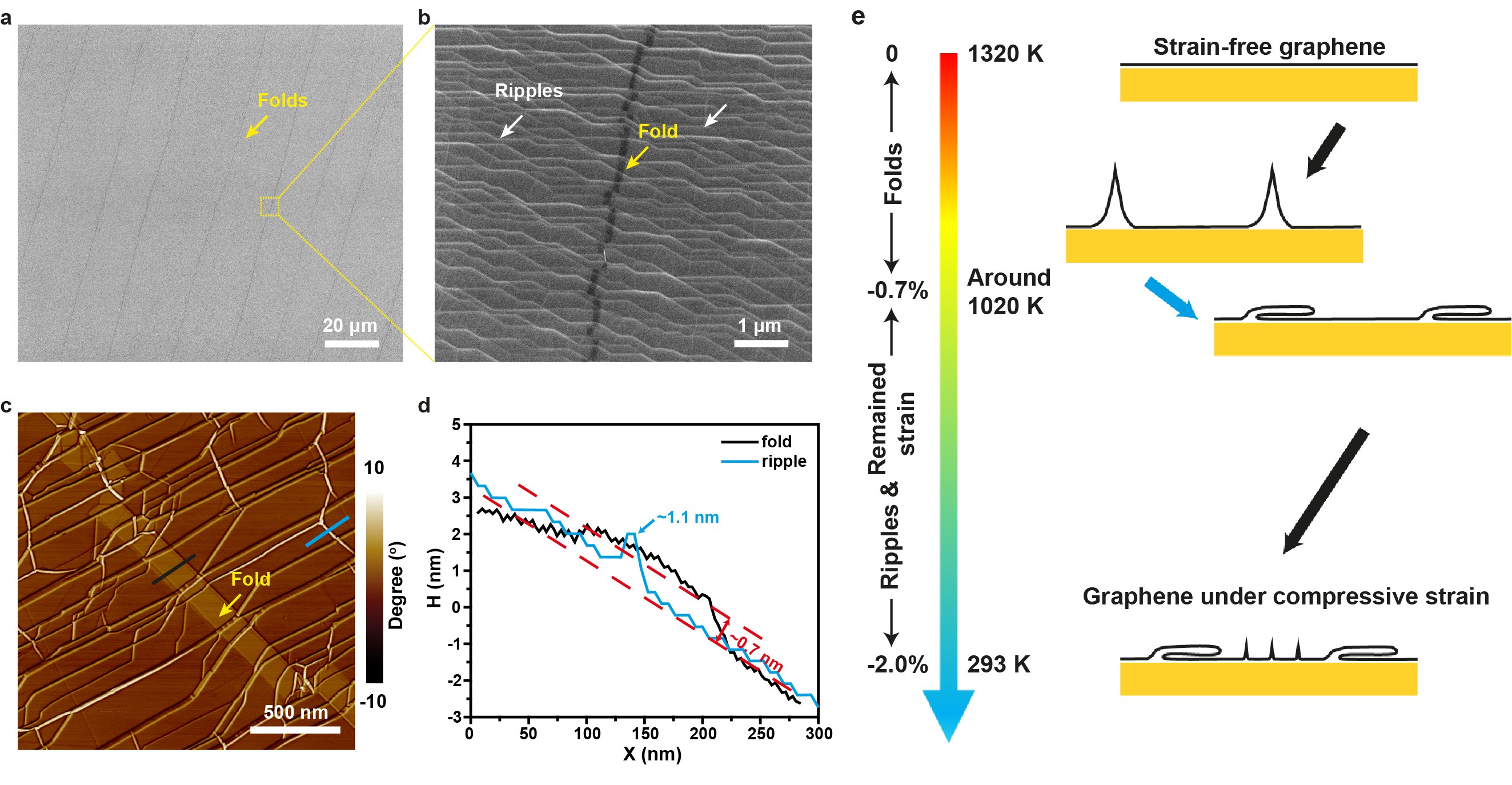 We tried to achieve fold-free and also high quality graphene on Cu(111) foils at such “low” temperatures with methane, ethylene, and also acetylene, but the graphene was not the high quality desired, even though it could be fold-free. (Perhaps some carbon precursors will be found that will allow growth of high quality graphene on Cu(111) in the future.) Thus we went to Cu-Ni(111) foil because it shows a much higher catalytic effect on the decomposition of carbon precursors compared to Cu (ACS Nano, 2018, 12(6): 6117-6127).

Via optimization of growth parameters (the concentration of Ni in the single crystal Cu-Ni(111) foil substrate, gas pressure and gas flows of ethylene and hydrogen), we achieved adlayer-free single crystal and single layer graphene films on Cu-Ni(111) foils with 20.0 at.% Ni at a wide temperature range using diluted ethylene (0.3% in Ar) as the carbon precursor. Especially, high-quality large-area “fold-free” single crystal single layer graphene films are achieved in a growth temperature range between 1000 K and 1030 K. This new fold-free graphene film shows highly uniform transport properties: field-effect transistors prepared from these films with the active channel patterned in any direction and anywhere in the entire graphene film exhibit very uniform average room temperature carrier mobilities of around 7.0 ± 1.0 × 103 cm2V-1s-1 for both holes and electrons.

Using a high-temperature X-ray diffraction system, the difference in contraction between the Cu-Ni(111) alloy foil substrates and the graphene film is measured as 0.64%, 0.52%, 0.29%, when cooling to 1030 K from 1320 K, 1270 K, or 1170 K, respectively, and these values match very well to the percentage of the graphene that de-adheres (i.e., contributed from the graphene folds) in each case. In other words, graphene folds are formed by the complete release of interfacial compressive stress that builds up when the foil is cooled from the growth temperature down to 1030 K. We further found that cooling from ~1030 K to room temperature yields graphene with compressive strain and with a small percentage of the area present as parallel ripples (that have widths of about 1 to 2 nm and heights of about 1 nm).

We note that this growth condition is quite reproduceable and scalable, permitting simultaneous growth of graphene of the same quality on multiple foils configured in parallel. After electrochemical ‘bubbling’ transfer of the graphene films from the Cu-Ni(111) foils, the foils themselves can be reused essentially indefinitely for further graphene growth (and we tested this with the first growth and then 4 more growth runs on the same foils, and obtained high quality graphene each time).

Another aspect of the work is that we delved into why the folds formed. High resolution TEM imaging of cross section samples grown above 1040 K showed that the deadhesion is initiated at the “bunched step edge” regions between the single crystal (111) plateaus. This deadhesion at the bunched step edge regions, we suggest, triggers the formation of graphene folds perpendicular to the step edge direction. We discovered that the formation of “tall wrinkles” (that fall over to generate the folds, and here we are inferring the presence of such tall wrinkles—they have yet to be observed in situ) is driven by a reconstruction of the surface, and this ‘surface reconstruction’ is the reason why the critical growth temperature of fold-free graphene is at ~1030 K or below”.

Finally, Ruoff notes: “The entire review process was professional. It was like an enormous breath of fresh air for me and our team. Analogues of Nature’s “Transparent Peer Review” process should be adopted by (many) other journals.”