From the twirling circumnutation of growing tendrils to the opening and closing of stomata to the growth of fungal hyphae, plants and fungi are moving all of the time, often too slowly to notice. Rapid movements, though rarer, are used by many plants in essential functions such as self-protection (Mimosa pudica), seed dispersal (Imatiens glandulifera), and food acquisition (Dionaea muscipula), as shown in Figure 1(a). The diversity of these nonmuscular hydraulic motion, often referred to as nastic movements, are stimuli-independent mechanical movement and follow shape transformation rules—Gauss’s theorema egregium. In Gauss’s theory, Gaussian curvature is an intrinsic measure of curvature on a developable plane and keep as constant zero without obvious stretching or compression. It implies that one direction of a plane must always remain flat no matter how you bend it. As a result, you can force the sheets to become flat in on direction by folding it in the other direction. Using this mechanism, motile plants exhibit fast mechanical movements in few seconds or less.

Fast-moving plants, as examples of dynamically morphing biological structures, are good model systems in the field of biomimetics, which help to resolve problems in engineering. By mimicking movement in Mimosa pudica, Impatiens glandulifera, and Dionaea muscipula in nature, we apply a Gaussian-preserved mechanism to dynamically morph nanomembranes, referred to Gaussian-preserved shape-morphing system, for inducing fast, non-volatile, reconfigurable, and reversible structural transformation. The shape morphing behavior can be divided into three types as shown in Fig. 1(b), named as pure bending, anti-symmetric bending, and cross-ply bending. In this system, some degree of stretching is locally involved in the nanomembranes by introducing a folding crease, which allows the nanomembranes to morph non-isometrically. Besides, this stretching is only confined to the narrow creased region, while the majority of thin nanomaterials preserves Gaussian curvature which is bending-invariant and remains zero. As a result, using Gaussian-preserved system, the transformation between different structures can be triggered by mechanical or thermal stimuli within 4.5 μs ~ 2 s.

We apply Gaussian-preserved system into microelectronics areas for solving the challenge of the diversity of applications. Combining the electrical characteristic of phase transition in VO2 and reconfigurable structures, dual-functional microelectronic devices were fabricated as shown in Figure 1 (c) and (d). An antenna can transmit electromagnetic waves to space from conductive components. The property of antenna highly depends on its physical geometry. Figure 1 (c) shows a concealable antenna of which working frequency will shift as a result of the shape morphing. With morphing shape from II to I, working frequency shifts from 47.4 to 48 GHz and the reflection coefficient falls below -4 dB. Another example, dual-functional switches based on bistable Cr/VO2 nanomembranes were fabricated as shown in Figure 1 (d). The responses of two types of switches under light stimuli show different ON-OFF ratio, suggesting that our optically activated switches can regulate the electrical circuit with more maneuverability. The reconfiguration in situ, and therefore, provides manufacturing paradigm of diversification for the ‘More-than-Moore’ roadmap. 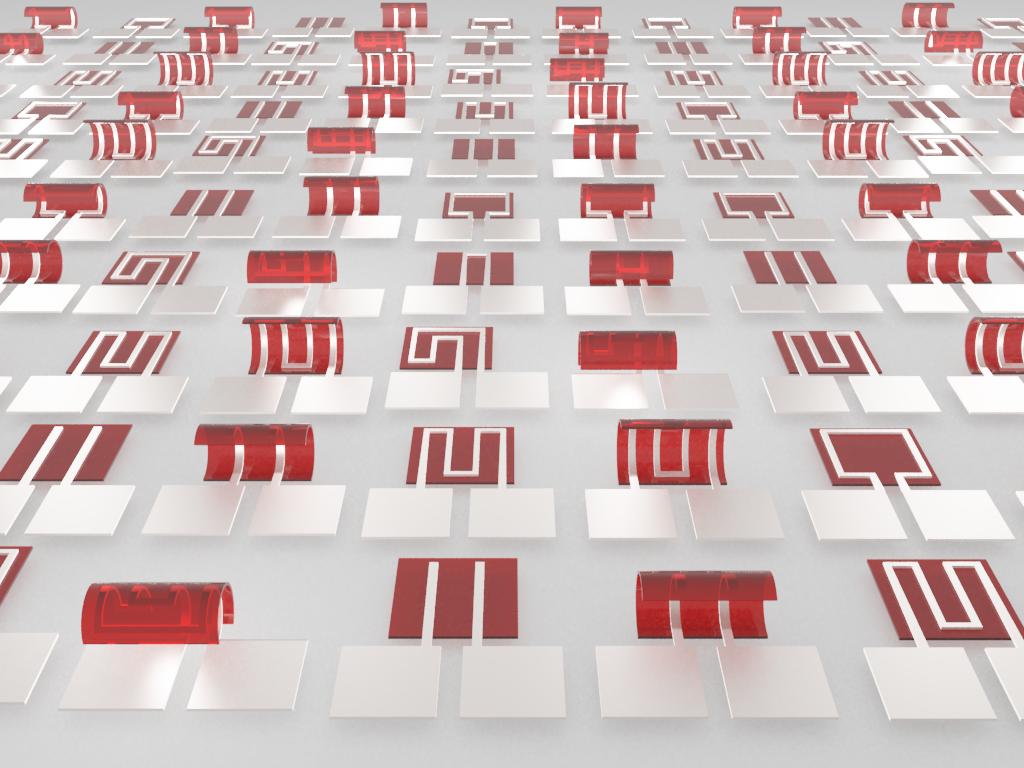