Sensors based on differential Fowler-Nordheim quantum tunneling dynamical systems can overcome energy-efficiency limitations of conventional self-powered sensing methods
shantanu chakrabartty
Professor, Washington University in St. Louis
Follow
Like Be the first to like this
0

Designing ultra-low-power sensing and data-logging techniques with battery-free operation of sensor nodes remains a challenge. Here, the authors present a self-powered sensor-data-logger device that records a cumulative measure of the sensor signal intensity over its entire duration.

Sensor systems come in two varieties depending on how they are powered. One variety is where the power required to operate the system needs to be delivered from an external source, like a battery or a wireless energy source.  This approach for powering is flexible, however, the size of the battery, the size of the antenna or the energy harvester limits the deployment of the sensor in many embedded and implantable applications. The second variety of sensor systems are the self-powered type where the transducer signal (electrical, biochemical or acoustical) directly powers the entire system. Thus, such a system can continuously sense and measure without loosing any activity data or data corresponding to any rare events. Unfortunately, for microsensors, the maximum electrical power that can be harvested from a transducer can be well below the nano-watts and pico-watts range. At these power levels conventional energy harvesting devices and techniques are impractical, or are not efficient at all. However, this level of energy might be sufficient to program or modulate another continuously running physical process such that some ensemble statistics be continuously measured and stored on a non-volatile memory. The stored statistics could then be retrieved at a later time, when sufficient energy is available or delivered to the system. Over the last decade and a half, my research group and others have been investigating different ways to implement such self-powered sensor data-logging devices. However, in all these previous approaches energy-efficiency limitations arise due to rectification efficiency, and due to material properties that influence diode thresholds or leakage currents.

In our recent paper in Nature Communications titled A Self-powered Analog Sensor-data-logging Device based on Fowler-Nordheim Dynamical Systems, we show that the previously perceived efficiency limitations on self-powered sensing could be overcome by using the transducer signal to directly modulate the state of a synchronized dynamical system. This approach is contrary to the conventional self-powered sensing methods where energy is first harvested to then switch between the static states of a non-volatile memory. In our approach we use two synchronized, stable dynamical systems; a sensing system and a reference system. A time-varying input signal modulates the state trajectories of the sensing dynamical system leading to its desynchronization with respect to the reference dynamical system. The relative degree of desynchronization between the two systems then serves as a medium for sensing and storing the cumulative effect of the input modulation.

While this principle seems relatively straightforward, the key challenge lies in implementing the proposed concept at a chip-scale. First, due to self-powering requirements, the synchronized dynamical system can only be implemented using a leakage (dissipative) process that is driven by intrinsic thermal or quantum transport of electrons. The time constant of this leakage process needs to be large enough to ensure the dynamical systems can operate for days and years. Also, since leakage mechanisms tend to be sensitive to parasitic and device mismatch artifacts, achieving robust synchronization between two devices tends to be difficult. Several years ago, my research group had reported a micron-scale, time-keeping device that used Fowler-Nordheim (FN) quantum tunneling of electrons to achieve robust synchronization. The dynamics of the device evolved as 1/log with respect to time and it’s response was shown to be measurable even at tunneling rates as low as a single electron per minute. In this work we show that the stability and the reliability of FN quantum tunneling can be used to create a differential pair of synchronized devices that remains compensated across environmental variations and over a duration of hours, days and possibly years. Furthermore, we show in this work that the differential FN sensor-data-logger nicely balances the trade-off between the non-linearity in the dynamical systems response and the duration over which the sensed information can be retained.

At a theoretical operational energy-budget of less than 10 attoJoules per event, the FN sensor-data-logger can be powered by any passive sensor that is capable of transducing a physical signal into an electrical signal. These include piezoelectric transducers, photodiodes, radio-frequency antennas, thermocouples, triboelectric generators, amperometric glucose sensor and possibly electrodes used for recording in-vivo neural activity.  From the point of view of ease of implementation, the basic device and its measurement circuit comprises of only four capacitors and two field-effect transistors, all of which can be readily fabricated in any commercially available silicon process. 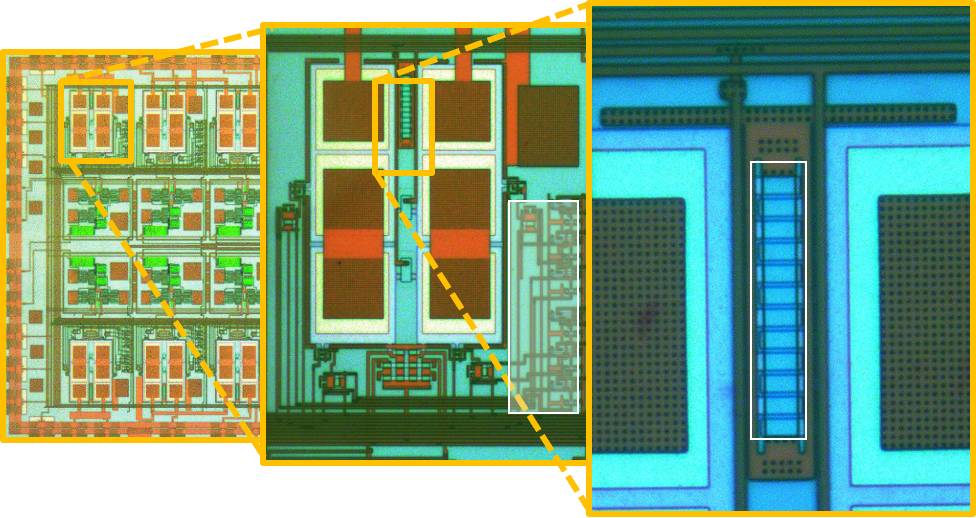