MUF-16 is capable of producing pure hydrocarbons by capturing CO2 impurities. It is stable, inexpensive, recyclable and can be synthesized in large scale. Its regeneration is straightforward that is a purge stream of an inert gas can drive off adsorbed CO2 molecules at near ambient conditions.

Light hydrocarbons (ethane (C2H6), ethylene (C2H4) and acetylene (C2H2), methane (CH4)) are essential feedstocks for the commodity production in the petrochemical industry or as fuels. Production of these hydrocarbons mainly coexists with carbon dioxide (CO2) impurities which is not only considered as a barrier of the heat release from gas combustion and corrosive to gas pipelines but also further influences the conversion of the products. Removal of CO2 from these hydrocarbons always has been a challenge due to the similarities of these molecules in terms of their molecular sizes, shapes and physical properties. Compared to conventional separation methods, adsorptive separation processes using porous materials have gained much attention as an environmentally friendly and energy efficient alternative.

In our group in Massey University, we developed a relatively new class of these porous materials that can be used for gas separation specially CO2 removal from hydrocarbons. These are called Metal-organic frameworks (MOFs) and/or porous coordination polymers (PCPs) which are composed of metal containing nodes and organic linkers. Unlike traditional porous materials (i.e., zeolites, silica, and activated carbons), the structures, pore size, and functionalities of MOFs can be finely tuned. This allows for exquisite control over pore environment and efficient separation can be achieved. However, MOFs are expensive to be produced and they often lack structural stability in harsh conditions. Moreover, their synthesis scalability, regenrability and recyclability has not been studied intensively in the literature. In our group, the main goal is developing materials that are efficient for gas separation, yet are synthesized readily with inexpensive reagents, stable and can be regenerated easily.

In our recent paper in Nature Communications titled Selective capture of CO2 from hydrocarbons using a metal-organic framework, we introduce MUF-16, a MOF with characteristics of a promising material for CO2 related separation applications. MUF-16 is prepared easily by combining 5-aminoisophthalic acid (H2aip), an inexpensive, commercially-available linker, with cobalt(II) salts in methanol. We developed a rapid and high-yielding synthetic procedure to produce MUF-16 on a large scale in 92% yield in just two hours. We note that the raw materials costs of MUF-16 are low and the synthetic process is straightforward. The methanol solvent and acetic acid byproduct can both be easily recycled. Additionally, MUF-16 can be made into pellets using polymeric binders and it is stable in humid atmosphere and maintains its stability at high temperatures. Such characteristics of MUF-16 make it a promising materials for implementation in industrial settings.

Figure 1. MUF-16 is a plate-like pink crystals that features one-dimensional channels with approximate dimensions of 3.6 × 7.6 Å that propagate through the framework. The Connolly surface of the framework is shown in orange and defined with a probe of diameter 1.0 Å. It adsorbs CO2 through a combination of favorite electrostatic molecule-framework interactions and close contact with CO2 molecules. Conversely,  it shows near zero adsorption of hydrocarbons. As an example, electropositive regions around the C2H2 termini induce repulsive interactions with the framework pore surface, as illustrated by a hypothetical loading model.

Next, we evaluated its separation performance by measuring its adsorption capacity under static and dynamic conditions using an in-house breakthrough adsorption rig. Thanks to its easy scale-up procedure, 1 g of MUF-16 was synthesized and placed in the adsorption column. Then different feed gas mixture was passed through the column to test the separation performance of MUF-16 by detecting the concentration of effluent. In all cases, MUF-16 separated CO2 from different hydrocarbons by adsorbing CO2 while letting the hydrocarbons pass the column. The ability of MUF-16 to selectively adsorb CO2 is an important advantage of this MOF as pure hydrocarbons can be produced directly in a single adsorption stage. In literature reports to date, the capture of CO2 over C2 hydrocarbons has so far largely been restricted to cryogenic temperatures and/or static conditions and only a few materials show selective adsorption of CO2 over hydrocarbons especially C2H2.

To investigate the mechanism of selective adsorption of CO2 by MUF-16, we used capillary single X-ray crystallography technique to address binding sites within the framework. A single crystal of MUF-16 was placed in the capillary and flame-sealed after loading with CO2. Structural solution of CO2-loaded MUF-16 crystal clearly showed strong interaction between CO2 molecules and framework through short contact hydrogen-bonding. The pores of MUF-16 perfectly matches the size of CO2 molecules. 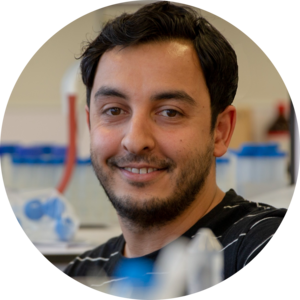 Research Associate, The University of Manchester