Explanation of the heat map measurements shown in "A Resonant Metamaterial Clock Distribution Network for Superconducting Logic". This post explains how the measurements were made, and their role in illuminating how the resonators couple to the rest of the circuitry.
Nancyjane Bailey, Nancyjane Bailey & Joshua Strong
3 contributors
Like Liked by Evelina Satkevic and 1 other
0

In our paper “A Resonant Metamaterial Clock Distribution Network for Superconducting Logic”, figure 2c is a heat map showing the magnitude of transmission through a resonant clock network as a function of RF clock power and DC bias current applied to an RQL circuit.  When the clock power is high enough to cause the Josephson junctions to trigger, they draw power from the resonator.  This causes a shift in the transmitted amplitude.  The measurement is a valuable tool that may provide insight into the health of our circuits before any logic tests are performed.

We used a computer controlled four-port network analyzer and a current source (implemented by a voltage source and a 1Kohm resistor in series) to make the measurement.  The analyzer is set up to sweep over a small set of frequencies centered on the resonance frequency. There are two traces, one for |S21|  (the I resonator) and one for |S43| (the Q resonator).  A marker is placed on each trace to follow the minimum of the trace on each network analyzer frequency sweep.

The control software employs a double loop.  First the RF power is incremented one step, then the bias current is stepped from minimum current to maximum.  The network analyzer frequency is then swept for each current step.

For a densely populated DynaZOR the amplitude at resonance may shift by as much as a few dB to as little few tenths of a dB, depending on design parameters.  If the resonator is sparsely populated with junctions, the shift may be much smaller, and may be undetectable.  A typical heat map shows the cumulative effect of many thousands of junctions drawing power from a DynaZOR clock network.

The heat map measurement is also interesting because it allows us to explore circuit dynamics in regimes that are not accessed in typical logic operation.  For example, in Figure 5, we see interesting structure at higher powers.  We observe diamond-shaped regimes where the junctions switch once per cycle, and higher diamonds where the junctions switch twice per cycle.  They are also useful for detecting low critical current in parts of the bias circuitry (see Figures 3 and 4).

We used the “jet” color mapping originally as it is the default for Matplotlib, the Python package used to create these plots.  Because of the way color is perceived, Jet emphasizes some small differences in the values being plotted.  I tried using perceptually uniform colormaps, in particular Viridis.  The structures that we were looking at were very muted in perceptually uniform color mappings.  In this case, the perceptual non-uniformity of jet actually helps by emphasizing structure.  (See Figures 6 and 7 below.) 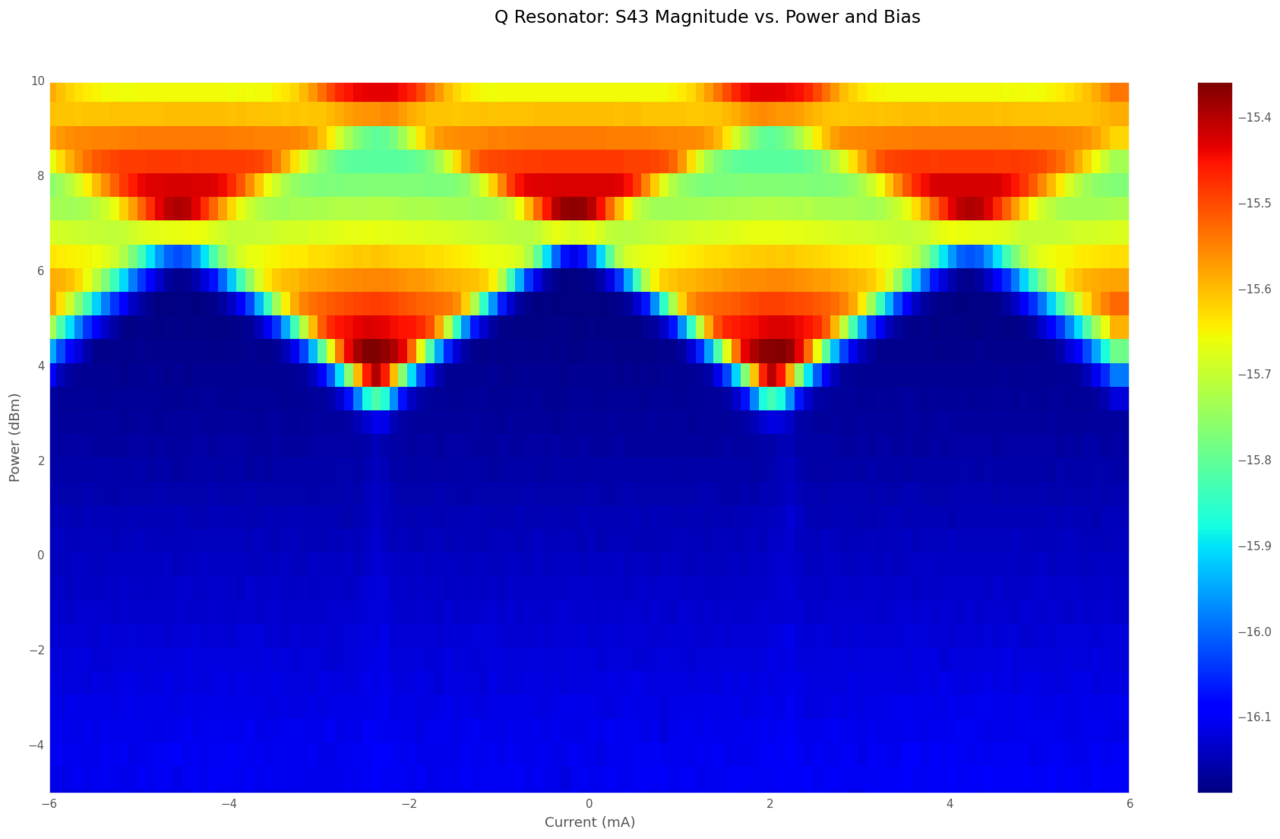 Explanation of the heat map measurements shown in "A Resonant Metamaterial Clock Distribution Network for Superconducting Logic". This post explains how the measurements were made, and their role in illuminating how the resonators couple to the rest of the circuitry.