Though high-index dielectric metasurfaces are attractive due to their nonlinear effects, channelling of 2nd and 3rd harmonic generation into a single beam remains a challenge. The authors addressed this using transition-metal-dichalcogenide metasurfaces with tunable nonlinear emission direction.

Nonlinear light sources are central to a myriad of applications, driving a quest for their miniaturisation down to the nanoscale. In this quest, nonlinear metasurfaces hold a great promise, as they enhance nonlinear effects through their resonant photonic environment and high refractive index, such as in high-index dielectric metasurfaces. However, since the time of Bloembergen 1965, there is no empirical evidence of any dielectric metasurface to date, that may operate as ultrathin nonlinear mirror to underpin the novel nonlinear light sources. All the metasurfaces reported to date operate in highly diffractive regime for second harmonic (SH) emissions, thereby to funnel nonlinear emissions into zeroth-order beam to trigger the directionality switching of second harmonic (SH) emissions from froward to backward direction, at will, remained challenging. This challenge has been addressed by fabricating single crystalline transition-metal-dichalcogenide (TMDC) MoS2 arrays of deep-subwavelength metaatoms on low index transparent Sapphire substrate, as illustrated in the Figure 1. The discovery hinged upon the remarkable potential of MoS2 which is its highest refractive index >4 and weak van der Waals (vdW) stiction forces between the atomically thin superfine crystalline layers.

In contrast to Si and III-V group semiconductors, the highest refractive index   and low absorption losses offered by MoS2 may enable the researchers to manipulate elastic nonlinear light-matter interactions down to the scale thousandth the thickness of human hair and may replace the bulky and cumbersome optical components to underpin the Next-Gen on-chip photonic devices. These novel properties motivated us to engineer the elastic nonlinear light-matter interactions in TMDC metasurfaces, for the first time ever! For this purpose, we could need to translate the bulk form of MoS2 (say stack of more than 200 atomically thin crystalline layers) into deep-subwavelength arrays of metaatoms on any desired low index transparent substrate. To address this challenging task, we had to think out of the box.

Thanks to the superfine crystalline structure and weak vdWs forces between the stack of atomically thin layers, the fabrication of MoS2 on transparent glasses does not suffer from challenging lattice matching requirements, in stark contrast to GaAs and AlGaAs. By employing the advance nano lithographic techniques available at ANFF (Australian National Fabrication Facility ACT Node) we developed scalable and repeatable our own recipe (from scratch) to fabricate arrays of subwavelength metaatoms of MoS2 on any transparent substrate (i.e., glass and sapphire). During the fabrication process, one of the biggest challenges was to control the surface roughness and slope of the sidewalls of the fabricated metaatoms. This has been addressed by tailoring the mixture of fluorine base gasses (such as SF6, CHF3) with Ar gas during the inductively coupled plasma dry etching process.

To characterize the linear and nonlinear properties of fabricated MoS2 metasurfaces, series of experiments had been performed in the Laboratories of the Australian National University node of the ARC (Australian Research Council) Centre of Excellence for Transformative Meta-Optical Systems and Nano Electro Mechanical Systems. In the beginning, we were surprised by the nonlinear results but at the same time were confused by the hidden physics behind the enhanced nonlinearities in MoS2 metasurfaces. Thanks to the collaboration with scientists from the University of New South Wales-Canberra (Australia), the University of Padova (Italy), and the University of Brescia (Italy) we were able to understand the underlying physical phenomena. The multipole expansion method and full-wave nonlinear simulations performed by them, helped us to realize the mixed nature of electric and magnetic Mie resonances in the SH spectrum and to divulge the source of nonlinearities in MoS2­ metaatoms, respectively. Unlike conventional bulk nonlinear crystals, the source of quadratic nonlinearities confined to atomically thin crystalline top and bottom surfaces of the MoS2 metaatoms.

Leveraging the highest refractive index of MoS2, we purposely induce the so-called Mei resonances at the SH wavelengths (700-800 nm), thereby acting as deep subwavelength metasurfaces not only for fundamental wavelengths (1400-1600 nm) but for second and third harmonic wavelengths as well. The strong interference effects between the source of quadratic nonlinearity and eigenfields of the induced Mei resonances can be tuned all optically, either by excitation wavelength or polarization. Such interference effects have been exploited to modulate the polarization of emitted SH light. As the modulated polarized emitted SH light can be detected from either side of the metasurface into the zeroth order beam all optically, without the need for complicated geometry or fabrication steps. Therefore, one can implement the proposed arrays of single crystalline metaatoms to project different images encoded into the different polarization of the emitted SH light, thereby opening avenues towards ultrathin nonlinear metasurfaces for optical encryption and augmented reality systems.

The most intriguing property of the proposed metasurface is its ability to tune/switch the directionality of SH emissions into froward and backward direction, can be triggered either by excitation pump wavelength or polarization. The key enabler behind this property is the highly sub-diffractive nature of MoS2 metasurfaces for SH emissions that enabled us to funnel all the SH emissions into zeroth-order beam. A near-infrared laser beam at normal incidence to the metasurface is instantaneously converted into two separate beams of SH emissions one going froward and second going backward. The emitted SH beams follow the same path as of normally incident laser beam, owing to the sub-diffractive nature of the metaatoms. The ratio/percentage of the emitted SH emissions in the split beams can be controlled all optically. Hence one may tune the pump polarization or wavelength to detect the various split ratio i.e., 1:1, 1:9, 90:1, 1:100 etc, of SH light in the forward and backward direction. Such controlled detection of emitted SH light into zeroth-order beam from either side of the metasurface, making our metasurface to act like homogeneous ultrathin nonlinear crystal to underpin the invention of unprecedentedly miniaturized novel nonlinear light sources and reconfigurable next-gen quantum photonic devices. For the first time ever, we have presented that by fabricating vertical cylindrical vdW metaatoms, we can transform any low index transparent glass into a mirror for the SH light, thereby acting as an ultrathin nonlinear mirror (imperceptible to eyes) for novel nonlinear light sources. One application that we could foresee of this nonlinear mirror is its ability to switch the night vision from forward to backward direction.

Last but not least, this ultrathin nonlinear crystal can generate polarization-entangled collinear photon pairs going into the opposite directions in the zeroth-order beam. This novel entanglement photon pair generation can be implemented in various experimental ways to invent quantum eraser (http://doi.org/ccs7). Moreover, the experimental detection of collinear split (in the opposite direction) of photon pairs, owing to interference effects between Mie resonances and nonlinear current sources confined in the topmost and bottommost crystalline layers acting as forces to push the quantum particles (photons) in forward and backward direction simultaneously, demonstrate the first experimental realization of the novel backflow effect (https://doi.org/10.1103/PhysRevA.96.012112) of quantum particles (emitted SH photons). 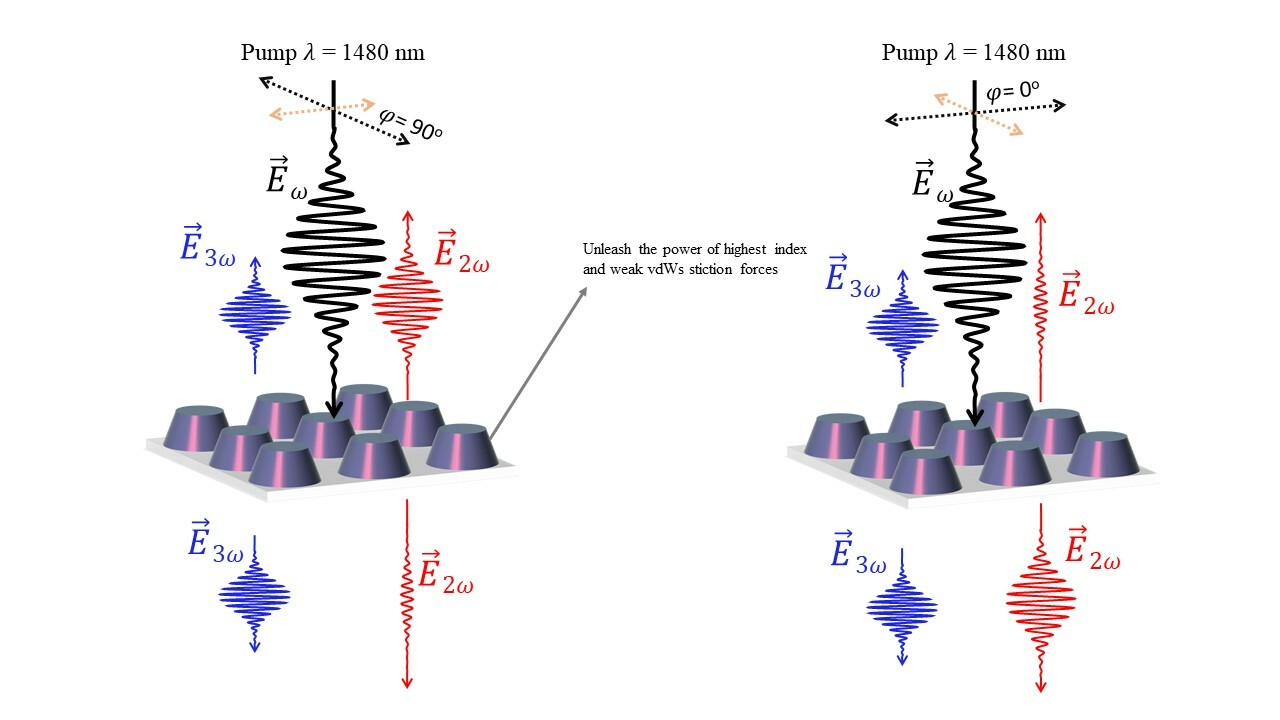 Funnelling second and third order nonlinear emissions into zero order beam is challenging and this has been addressed by fabricating superfine crystalline subwavelength arrays of van der Waals layered metaatoms on transparent substrate.