Current memristors are limited in their ability to adapt and modify their structure/function according to the requirements of various neural network architectures. Here, we exploit halide perovskite nanocrystal memristors with reconfigurable volatile and non-volatile modes to address this challenge.
Rohit Abraham John, Yigit Demirag, Giacomo Indiveri & Maksym Kovalenko
4 contributors
Like Liked by Sorrel Bunting and 2 others
0

Existing memristors cannot be reconfigured to meet the diverse switching requirements of various computing frameworks, limiting their universality. Here, the authors present a nanocrystal memristor that can be reconfigured on-demand to address these limitations

The human brain forms the inspiration for engineers to redesign the next generation of computers for ultra-low-power processing at a massive scale. Following millions of years of evolution, neural computation in the brain harvests various intricate molecular machinery in the synapses to process and store information. And today, the field of neuromorphic engineering follows these operating principles of the biological substrate to design efficient neural processors. To do so, in-memory computing with the emerging memory technologies has been favoured to combine processing and storage, and subvert the von Neumann bottleneck, which is by far the most critical power-demanding limitation of mainstream computer architectures. These nanodevices, called memristors, have been one of the main driving forces for the highly efficient emulation of various bio-inspired functionalities with simple and highly parallelizable architectures. However, existing memristor implementations are limited by the ability to adjust their structure/function according to the requirements of the neural network architecture at hand. Thus, they are often heavily tailored in the fabrication phase to suit specific target applications. For example, deep neural network workloads require memristors with linear conductance response and minimum programming noise for gradient calculation, whereas spiking neural networks can exploit devices with short-term dynamics and probabilistic behaviour.

What if there were memristors that could be reconfigured on demand to meet all these various requirements?

), we address these concerns.

We exploit cesium lead bromide (CsPbBr3) perovskite nanocrystals (NCs) capped with organic ligands as the active switching matrix and silver (Ag) as the active electrode. The design principle for realizing reconfigurable memristors revolves around two main factors. (i) From a material selection perspective, the low activation energy of migration of Ag+ and Br- allows easy formation of conductive filaments. The soft lattice of the halide perovskite nanocrystals facilitates diffusion of the mobile ions. Most importantly, the apt organic capping ligands can help regulate the extent of electrochemical reactions, resulting in high endurance and good reconfigurability. (ii) From a peripheral circuit design perspective, active control of the compliance current (Icc) determines the magnitude of flux of the mobile ionic species and in turn allow facile switching between volatile diffusive and multi-bit non-volatile drift modes of operation.

The secret to this lies in the judicious selection of the NCs and their capping ligands. In our devices, the resistive switching is caused by migration of Ag+ ions resulting in conductive filaments. We prove this by a series of electrical characterizations and Secondary-ion mass spectrometry (SIMS). In our observation, bulkier ligands such as oleylguanidinium bromide (OGB) with better surface coverage and binding to the nanocrystals fare well in controlling such electrochemical reactions occurring within the device during run time- key to ensuring high endurance. In operando infrared imaging reveals further evidence in this regard. We report NCs capped with OGB with record-high endurance performances in both volatile (2 million cycles) as well as non-volatile switching (5655 cycles) modes. In comparison to perovskite thin films, NCs allow reconfigurability on the fly, enabling multiple computational primitives on the same hardware substrate.

Finally, to demonstrate the advantages of the reconfigurability feature of our perovskite memristors, we chose an example application that requires multiple distinct synaptic behaviours. We model a fully-memristive reservoir computing (RC) framework with dynamically-configured layer of virtual volatile reservoir nodes and a readout layer with non-volatile weights in simulation. In particular, we address three distinct forms of computational requirements using the reconfigurability of the proposed device: an accumulating/decaying short-term memory for the temporal processing in the reservoir; a stable long-term memory for retaining trained weights in the readout layer, and a programming methodology for accessing analog states from binary devices to enhance the training performance.

PhD Candidate, The Institute of Neuroinformatics

Professor, University of Zurich and ETH Zurich, Institute of Neuroinformatics 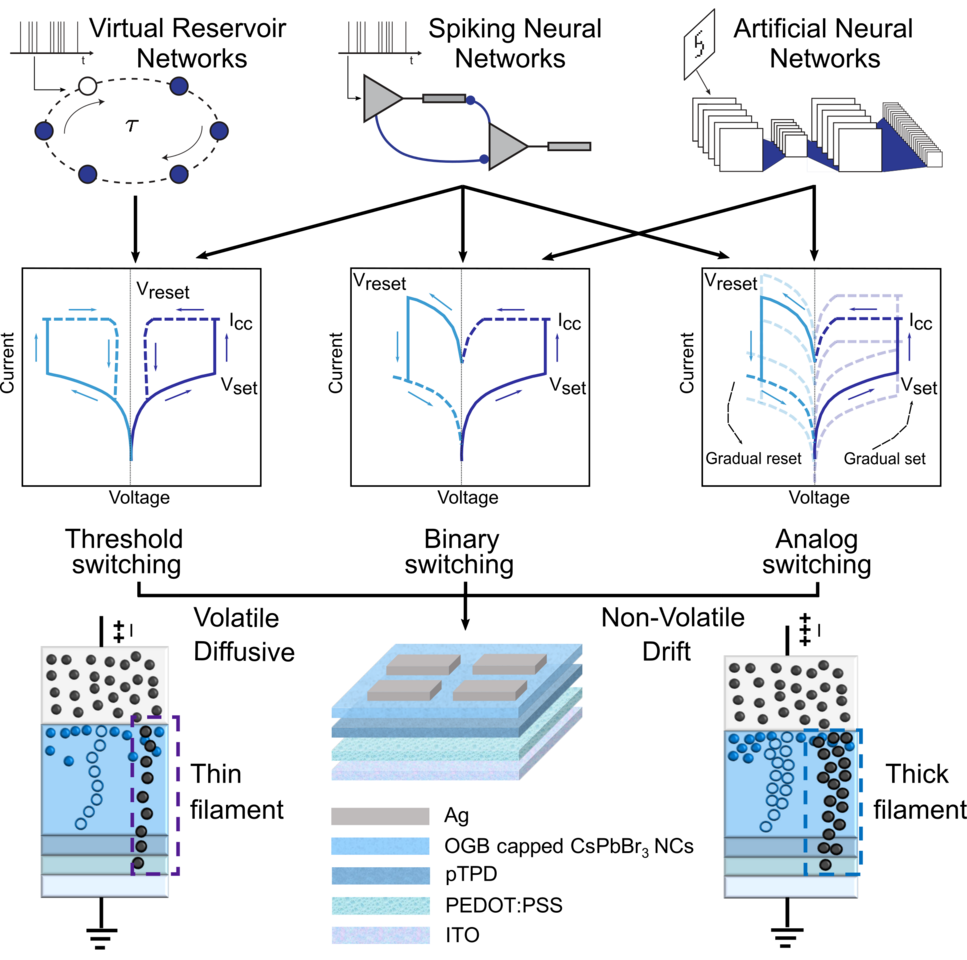 Current memristors are limited in their ability to adapt and modify their structure/function according to the requirements of various neural network architectures. Here, we exploit halide perovskite nanocrystal memristors with reconfigurable volatile and non-volatile modes to address this challenge.