Leaves constitute one of the largest biointerfaces on Earth, which frequently interacts with wind, raindrops and other elements. Raindrops can produce charges on the leaves and we analyzed this phenomenon in detail.
Serena Armiento and Fabian Meder
2 contributors
Like Liked by Sorrel Bunting and 1 other
0

Contact electrification can generate useable charge on a variety of surfaces. Here, surface charge creation when a single water droplet hits various plant leaves is investigated, including the effect of droplet characteristics and whether the plant leaf is hydrophilic or hydrophobic.

Recent studies have shown that fluttering of leaves in wind can be used to create charges on the leaf surface. These can be scavenged as energy source by pairing the living leaf with artificial materials such as soft silicone films. The mechanism behind is contact electrification, a phenomenon that causes the formation of surface charges when two materials come into periodic contact. The same effect can be obtained when water drops impacts and spreads on a solid surface, as shown in Fig. 1a. An important aspect of liquid (water)-solid (leaf) contact electrification is that when the water drop comes effectively off from the leaf surface after spreading on it, this maximises the formation of surface charges. Some plants, like the Lotus (N. nucifera) show the ability to repel water more effectively than others, due to the presence of micro- and nanostructure on the cuticle, causing the famous Lotus effect. Given the self-cleaning ability of such plants, we wondered whether this feature could be beneficial for charge generation on the surface waxes. In this study we thus tested different species, both water repellent and not, such as C. antiquorum (superhydrophobic) and A. macrorrhiza (hydrophilic), highlighted in the red box of Fig. 1b.  The two plants belong to the same family, Araceae, and yet they show remarkably different wetting behaviours, as illustrated by the high-speed camera snapshots in Fig. 1c. As for the famous Lotus plant, the explanation for this behaviour resides in the surface morphologies of the two model species, which we observed under the scanning electron microscope (SEM), see Fig. 2a. The dense layer of nanosized wax crystals on the superhydrophobic C. antiquorum causes not only the water repellence but also enhances the triboelectric charges generated on the leaf surface when a water drop hits it. As shown in Fig. 2b, a water drop impacting on a hydrophilic leaf of A. macrorrhiza produces on average a current signal of only 0.2 nA, while a droplet hitting a superhydrophobic leaf of C. antiquorum produces on average an up to ten-fold increased signal of 1-2 nA. We tested then in detail the effect of the surface (epicuticular) waxes on the electric signals. We first treated a C. antiquorum leaf with heat to melt the wax crystals, change the spiky nanostructure to a flatter surface and tested the droplet-generated electrical output. Then we used chloroform to remove the waxes completely and repeated the tests. The results are depicted in Fig. 2a. Interestingly, the treatments did not modify substantially the hydrophobic behaviour of the leaf, as shown in the contact angle insets of Fig. 2b. However, the treatments had an important effect on the electric signals caused by the water drop: complete removal of the waxes reduces the amplitude of the current signals to a value comparable to the signals on a hydrophilic plant like A. macrorrhiza. Instead, melting the wax crystals to a flat layer produces current signals with an amplitude reduced to half compared to the pristine leaf morphology. These results suggest that the wax layer has a major influence on the formation of triboelectric signals, as well as the contributions of both the wax chemistry and wax structure (nanocrystals).

All experiments are conducted using uncharged droplets of deionized water, although specialized studies indicate that natural raindrops often charge due to diffusion of atmospheric ions, electric field separation (e.g., during thunderstorms) and friction with air. Using an ion gun, we charged water droplets positively and negatively and observed that the resulting electric signals caused in the plants are much higher and largely independent of the leaf species. In fact, charges from charged droplets are directly induced in the inner tissue where they can be harvested by simply putting an electrode in the plant.

The results of this study help to contribute to understanding the mechanism of liquid-solid contact electrification on natural surfaces, like the ones of leaves, and this in turn may be inspiration for innovative materials and structures for bioinspired or biohybrid energy harvesters and sensors. 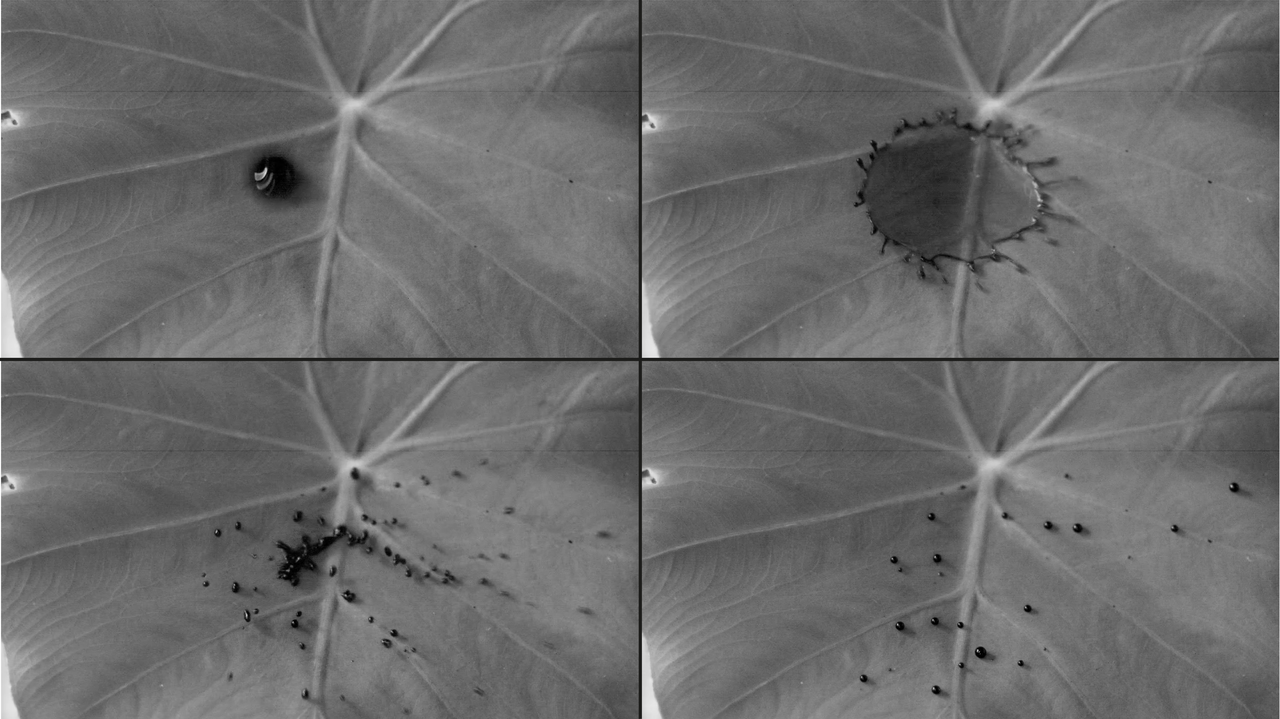 Leaves constitute one of the largest biointerfaces on Earth, which frequently interacts with wind, raindrops and other elements. Raindrops can produce charges on the leaves and we analyzed this phenomenon in detail.