THz precision spectroscopy is a hot research topic. We present a metrological-grade hybrid dual comb spectrometer merging the high emitted power of a THz-QCL frequency comb, with the accuracy and absolute frequency scaling of an optically rectified THz comb, locked against a frequency reference.

The THz range of the electromagnetic spectrum (0.1 – 10 THz) has been for a long time a hard-to-access and thus an under-exploited spectral region. In the last decades, this spectral region has been increasingly studied, leading to significant innovations in a broad range of applications, such as fundamental physics, petrochemicals detection [1], security [2], astrophysics [3] and health [4]. Performing high-precision spectroscopy in this spectral region is still a hard technological challenge. Indeed, unlike the near-infrared and visible spectral regions, there is no optical source that is at the same time stable, referenced to the primary frequency standard, spectrally narrow, broadband or broadly tunable, and providing high energy output [5].

Moreover, optical alignment is complicated in the THz range. THz radiation is - obviously - not visible, and cannot be detected with cards or viewers like in the near-infrared range. Only specific cameras enable to see and characterize a THz beam; yet such devices are not always easy to use for every single step of an optical alignment. Besides, due to poor transmission of THz waves even in the best performing plastics or crystals, reflective optics must be used (e.g. spherical or parabolic mirrors), leading to inevitable optical aberrations. Moreover, other handy optical tools are not available in the THz range, as for example optical isolators, which results in optical feedback being a major issue in a lot of experimental setups. Last but not least of concerns, at ambient temperature one cannot avoid the presence of background blackbody radiation in the THz range, so that low power levels require cryogenic detectors or narrow band mixers to be properly processed.

Nevertheless, innovative techniques have been developed in the THz range for precision spectroscopy. Time-domain Asynchronous Optical Sampling (ASOPS) spectroscopy provides broadband spectroscopy from 0.13 to 3.35 THz, with resolutions down to 6·10-8, but at the cost of acquisition times of several minutes [6]. In the frequency domain, spectroscopic techniques are mainly based on frequency down conversion setups of near-IR and visible sources [7-8]. Particularly, their combination in dual-comb spectroscopy reaches precision levels of major interest [7, 9, 10]. Yet, all these techniques suffer from the same limitation: the low optical power available for spectroscopy (around 1 µW), ultimately hindering the spectrometer precision. Over the last decades, a novel kind of laser seems particularly adequate to take on this optical power issue: Quantum Cascade Laser (QCL) [11]. This semiconductor-based laser source allows ad-hoc tailoring of its emission (single-mode, multi-mode, frequency comb), and emits optical powers, in continuous wave operation, in the mW range. In the mid-IR, dual-comb spectroscopy setups involving two QCL frequency combs (QCL-FCs) have been developed, showing excellent sensitivity [12]. THz QCL-FCs dual-comb spectroscopy is a hot research topic as well, with low resolution line acquisitions of ammonia and water vapor demonstrated in very recent works ([13-15]). Yet, a persistent issue, in both spectral regions, is the lack of mutual coherence between the two QCL-FCs, and, more importantly, the lack of referencing to a frequency standard.

The necessity to link the optical source to a frequency standard, for metrological-grade applications, led us to the hybrid dual-comb approach [16], described below, involving a high optical power QCL-FC, and a stable and offset-free optically-rectified frequency comb (OR-FC). The aim of the devised setup is to use the OR-FC to obtain an accurate and absolute frequency referencing for a QCL-FC, used for spectroscopy, thus merging the best of these two very different sources.

Description of the QCL and OR-FC

The QCL source is mounted on top of a He-cold finger, and is driven in continuous-wave (CW) mode operation by a low noise current driver. The QCL-FC emission, i.e. the frequencies of all the modes (fN), are determined by the driving current IQCL and by the heat-sink temperature TQCL. The intermodal frequency (fIBN, frequency spacing between two consecutive modes) is electrically retrieved via a bias-tee mounted close to the QCL device. The entire QCL emission is used to perform absorption spectroscopy of low pressure methanol gas sample, held into a 12 cm-long spectroscopy cell.

The reference comb is obtained through optical-rectification (OR) of an amplified mode-locked Erbium-doped fiber fs-laser, whose repetition rate (frep) is locked against a primary frequency standard, and which emission is focused onto a single-mode Lithium Niobate waveguide. By means of a silicon prism, the resulting THz frequency comb, the OR-FC, is extracted at the Cherenkov angle. This OR-FC carries interesting properties: in our case, the stability and accuracy are limited by the frequency standard adopted (i.e. stability 6×10−13 in 1 second, accuracy 2×10−12); the comb is offset-free, which enables an easy and robust frequency calibration of the QCL source. Besides, it has a repetition rate frep continuously tunable from 248 to 252 MHz. Finally, this OR-FC emission is mixed with the QCL-FC radiation on a He-cooled Hot Electron Bolometer (HEB), resulting into multi-heterodyne detection. A wire-grid polarizer (WGP) is used as beam coupler, in order to superimpose the QCL-FC and OR-FC radiations. This beam superimposition is by far the trickiest part of the optical alignment, but it is very stable once aligned. Indeed, since the HEB daily requires He-cooling, this last part of the optical alignment needs daily adjustments, only.

The multi-heterodyne detection scheme allows to detect the beating between the two combs in the output signal of the HEB: the retrieved radio frequency signal (RF-signal) is composed of the beatings between each mode of both OR- and QCL-FCs. Given the stability and spectral purity of the OR-FC modes, these heterodyne beatnotes (HBN) at frequencies fb,N permit the visualization of the QCL modes on a spectrum analyzer. The frequency down-conversion process is illustrated below and it is thoroughly detailed in our paper [16]. Since the OR-FC is offset-free, the QCL frequency of a mode, fN, can be retrieved as:

In this post, emphasis is put on the two principal reasons motivating hybrid dual-comb multi-heterodyne detection:

The two next sections explain our measurements techniques through didactic animations. Further measurements details are available in our paper.

The methanol absorption profile is retrieved by scanning the QCL driving current, which implies a change of the QCL modes’ frequencies and, accordingly, to the frequencies of the relative HBNs. Therefore, the technique permits to follow simultaneously the frequency scan of several QCL modes through several HBN, allowing to identify when one of them encounters a molecular absorption. Moreover, a big advantage of this technique is that it is independent from both temperature and current instabilities, since the subsequent QCL frequency shifts are directly taken into account on the HBN frequency scale. For the sake of clarity, the animation below shows two HBNs, and how the amplitude of the HBN colored in blue is mapped to retrieve the absorption profile of a methanol transition.

In the paper, two methanol transitions are acquired with the same mode, each time for three different pressure values, which allows to retrieve the self-pressure shift coefficient for each transition. The complete characterization of these lines, particularly the transition, requires an absolute and accurate calibration of the frequency scale.

During the procedure for the absolute frequency scale calibration, we need the frequencies of the emitted QCL-FC modes to be constant, and we therefore fix the device driving current and heat-sink temperature. The technique consists in identifying the order M of one mode of the OR-FC. Since the latter is offset-free, and its repetition rate is known with an excellent accuracy, the technique returns a complete and absolute frequency scale calibration for the whole OR-FC. The OR-FC mode is conveniently chosen as the one returning the highest signal-to-noise ratio in the multi-heterodyne detection. Following equation 1, we define this order M, returning the HBN named fb,N, when mixed with the mode N of the QCL-FC. The value of the OR-FC repetition rate, frep, is then tuned, while tracking the beatnote frequency fb,N. This permits to plot equation 1, the linear regression of which returns straightforwardly the exact integer value M of the OR-FC mode involved in the beating. At this point, we can use again equation 1 to retrieve the frequency of the QCL comb mode N, and since the OR-FC is very stable, the precision of this frequency ultimately corresponds to the precision on the measurement of the beatnote frequency. Knowing the intermodal frequency fIBN, we get then the frequency of all QCL modes. This proves the potential of the hybrid multi-heterodyne setup for broadband spectroscopic diagnostics.

The spectroscopic study of two methanol transitions for three different pressure values leads to the determination of linecenters at zero pressure with a relative uncertainty of 6.3·10-8. The accuracy of our spectrometer is at the state-of-the art level, and, being limited by the beatnote stability in amplitude and frequency, it can be significantly improved by using a fully stabilized QCL-FC [17] leading to stable and much narrower HBNs. The main challenge of this next step is the ability to scan the QCL comb modes over tens of MHz, while keeping a phase-locked QCL emission. 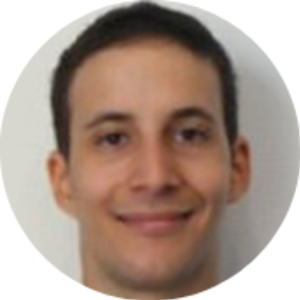 Daniel T Payne
over 1 year ago

Thanks Malik, for sharing more about your interesting work!