Efficiency, stability, and cost are the three key parameters, or the golden triangle used for screening techno-commercial feasibility of a semiconducting material for solid state applications (Nat Commun 9, 5265 (2018)). While perovskites are rivalling the cost and efficiency of the well-established semiconductors, intrinsic stability of the material is a continuing challenge. Resolving the stability issue in perovskites has been one of the major thrusts of Prof. Letian Dou’s research group in Department of Chemical Engineering at Purdue University. I joined the research group in 2017, and since then I have gained increasing interest in two-dimensional (2D) halide perovskites because of their higher compositional flexibility and stability compared to their three-dimensional (3D) counterparts. My interest in understanding the role of 2D perovskites in improving the stability of the material was further piqued when a postdoctoral researcher in our group, Dr. Gao Yao, published his findings on the enhanced ambient stability of 2D perovskites incorporating newly synthesized π-conjugated thiophene organic ligands (Nat. Chem. 11, 1151–1157 (2019)). We became interested in exploring whether these ligands could potentially inhibit the undesired halide migration along with their superior ambient stability.

A systematic study of different perovskite systems was then carried out to answer two fundamental questions – (1) What is the mechanism of halide inter-diffusion in 2D perovskites? and (2) How do the organic and inorganic components influence the halide diffusion?

By conducting a series of experiments, we found that the halide migration in 2D perovskites does not conform to the classical diffusion process mediated by a continuous concentration profile evolution. Instead, a unique layer-by-layer or “quantized” halide diffusion was observed which was dictated by the thermodynamically preferred halide compositions. Figure 1 shows a schematic representation of this unique mechanism.

Our study provides a platform for qualitative and quantitative screening of 2D perovskites with the eventual goal of utilizing the discovered stable perovskites in commercial scale solar cells, light emitting diodes, and transistors. 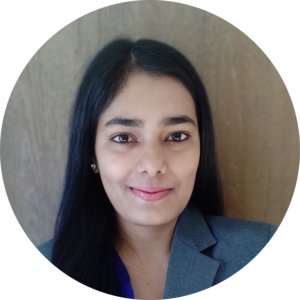