We identify an Anderson-insulating phase in single crystalline tellurium at low temperatures. Under pressure, the material undergoes a quantum phase transition to a disordered metal. Our study changes the understanding of the fundamental physics at low temperatures for this material.
Jaime and Carsten Enderlein
2 contributors
Like Be the first to like this
0

Elemental tellurium is a natural p-type semiconductor with a chiral structure and spin-polarized Fermi surface. Here, the authors show that the pressure-induced topological change of the Fermi surface at 17 kbar triggers an Anderson-Mott insulator-to-metal transition.

Tellurium is a well-known element, which physicists study since over a century. Currently, the material calls a lot of attention, as it appears to possess rather exotic properties that are of great interest, as much for the fundamental understanding of electrons in matter, as also for possible electronic applications. These include so-called topological phases, multiferroic behaviour, and magnetochiral effects.

Our interest in tellurium originated from a look at its electronic structure, which makes it susceptible for possible non-trivial electronic quantum correlations, and a lack of experimental studies of tellurium, when exposed to modest hydrostatic pressure between 12 and 25 kbar. Thus, in my first year as a PhD-student, in 2016, we outlined a plan on how to study single crystalline tellurium in the respective pressure range.

Tellurium samples are naturally very brittle and previous experiments within our group showed that crystals cracked rather often under thermal strain. Moreover, we had recognized that the quality of the crystals deteriorated quickly when exposed to a normal environment. This made the experimental set-up quite challenging. After several setbacks, we finally were able to close our pressure cell with a high-quality tellurium single crystal, on order to perform resistance and Hall voltage measurements from temperatures between 80 mK and 300 K. Unfortunately, the Hall contacts broke during one of the earlier temperature sweeps. However, as the literature shows that tellurium has a rather confusing and poorly understood Hall response, we decided to continue with the experiment anyway as the rest of our data was extremely promising.

We had recognized a kink in the resistive curves at around 1 Kelvin, which we did not know how to interpret. It could have been a signature of an unknown phase transition, but we were concerned of it just being some kind of experimental artifact.  Thus, in the following weeks and months, we changed equipment, excitation currents, frequencies, sweep velocity and other parameters, while sweeping over the same temperature range again and again.

It turned out that we had discovered a real feature and at temperatures below the kink, the data was consistent with an Anderson-insulating state – a phase of matter, based on quantum interference effects of the electrons in the material. We increased the pressure and observed a drastic change in the magnetoresistance and resistivity curves for above 17 kbar.

After many discussions between Marcello, Carsten, and me (Photo 1), we were able to show that we had found a rich phase diagram (as shown in fig.1) of elemental tellurium. Specifically, we showed that good quality, chemically pure, tellurium single crystals possess a Mott-Anderson ground state and by applying pressure, the ground state becomes metallic. This is extensively discussed in our paper.

Our work helps to answer open question, like why one measures a well-defined Fermi surface, even when resistivity curves show insulating behaviour. And it explains other recent measurements that indicated a phase transition in this pressure range. 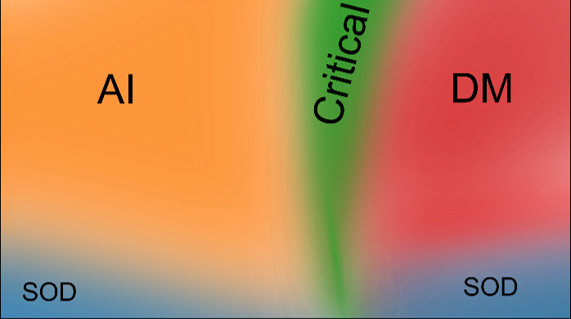 We identify an Anderson-insulating phase in single crystalline tellurium at low temperatures. Under pressure, the material undergoes a quantum phase transition to a disordered metal. Our study changes the understanding of the fundamental physics at low temperatures for this material.