Microfluidic devices with intrinsic structural colour are created using the method of Organized Microfibrillation. The made channels have multilayered porous structures self-enclosed in the polymer film. Poster image is an artistic rendering of fluorescent probes flowing through the porous channels.
Detao Qin
Assistant Professor , Kyoto University
Follow
Like Liked by Evelina Satkevic and 3 others
0

Organized microfibrillation can be used to optically printing well-defined porosity with high resolution into thin polymer films. Here, the authors use this method to create self-enclosed microfluidic devices in different flexible substrates and exploit the intrinsic appearance of structural colours…

Crazing in polymers, the formation of irregular microscopic fibrils and cavities, was often seen as the prelude to material failure, making it an undesirable phenomenon. In 2019, we, in the Pureosity group at Kyoto University, shed a different perspective on the crazing phenomenon. Through controlling the crazing process and organizing the microfibrils in a periodic pattern, we introduced a new method for structural color formation, the “Organized Microfibrillation (OM),” as we call it. With the OM, we have shown the inkless printing of coloured pictures in a resolution (14,000 dots per inch) ten times higher than the common office printers [1].

The structures made by OM behave like photonic crystals. The OM films are composed of alternating dense and microfibril layers, which produce structural colour effect through the Bragg reflections of the incident light. In nature, photonic crystal materials with structural colour properties are widespread. A very similar example is the elytra of beetles, which are made up of stacked fine scales that also form the alternated dense and loose (filled with air voids) layers. A particularly interesting point is that the liquids can flow in the loose layers and change the structural colour of the beetles, as reported earlier [2].

Going one step further, we asked ourselves if it is possible to use the OM structures to take up liquids and create a microscopically controllable flow accompanied by color change. With this in mind, we managed to repurpose the OM technology for making microfluidic chips (Fig. 1a). In our recent paper featured in the Editor’s highlight on Nature Communications, we described how we managed this, elaborating on the unique features and application potential of OM microfluidics as a new platform [3].

The OM microfluidics can be made with a few simple steps. Briefly, using standing-wave optics, we first selectively introduce crosslinks in a photosensitive polymer film. Employing a simple shadow mask during the photocrosslinking step, we generated microfluidic patterns. Afterwards, using a weak solvent system, we expanded the illuminated regions, resulting in microfibrillated channels. The formed channels are a stack of submicron porous layers self-enclosed in the film. Taking advantage of microLED lithography, we could print OM channels with a resolution as fine as 5 microns. Moreover, we were able to conduct OM microprinting on transparent substrates, which is an exciting technical upgrade for the OM technology itself, whilst microprinting in the original report (Nature, 2019, 570, 363) was limited to silicon wafer substrate only. Therefore, this achievement extends the scope of possible application scenarios of OM beyond microfluidics, at the same time.

Capillary flow, a convenient way to drive liquids in small channels, depends strongly on the wettability of surfaces with liquids. The materials we used for making OM channels are commodity polymers like polystyrene and poly(methyl methacrylate). Common liquids, including alkanes and alcohols, easily spread on such polymers, as indicated by their contact angle lower than 30° (Fig. 1b). In contrast, water does not like these materials, giving a contact angle higher than 90° (Fig. 1c). To solve this problem, we identified an additive that managed to lower the water contact angle down to 40° (Fig. 1d). By doing so, we could also study the flow of aqueous solutions in the OM microfluidic films. Plus, using fluorescent molecules, we could track the flow in OM channels with a confocal laser scanning microscope. The results confirmed that the porous substructures of OM are well connected in the in-plane direction, and thus, the liquid can flow through the patterned channels as desired (Fig. 1e, f).

The unique feature of OM microfluidics is the coupling of fluidic properties with structural colour. It is the internal pore size, not the extrinsic channel geometry, that determines the liquid flow in the OM channel. In the meantime, the internal pore size correlates to the interlayer spacing and thus the structural colour. Fig. 2 shows that liquid diffusion speed in the OM channel is proportional to its Bragg peak of structural colour, while channels with different extrinsic width but the same structural colour has the same liquid diffusion speed. Therefore, the OM microfluidics technology offers a unique self-reporting mechanism that visualizes the liquid flow properties in a colorimetric manner. Such a self-reporting mechanism is also beneficial to product quality control: the monitoring of submicron-sized channels was a fiddly work that usually needs a microscope for observation. The OM microfluidics, however, provides a convenient solution: the structural colour enables the naked-eye-based monitoring of internal channel (pore) sizes.

Moreover, the OM microfluidic technology is capable of manipulating and combining different porosities in a single miniature device, which enables pore-size-based applications. As a demonstration, we microprinted an OM pattern on glass, combining a large-pore main channel and a small-pore branch, where the variation of internal pore size can be seen from the difference in its structural colour. A number of biomolecular mixtures, including polysaccharides and proteins in different molecular weights, were tested in this OM device to study the separation effect (Fig. 3a). The results demonstrate the variation of pore size influences the diffusion speed of biomolecules to a different extent. Fig. 3b gives an example of the separation of two proteins: insulin (5.8 kDa, a blood glucose regulator and model protein used in biomedical assays) versus SARS-CoV-2 nucleocapsid protein (55 kDa, involved with viral genome package and antigen test for COVID-19 diagnosis) [4-6]. Our results showed that SARS-CoV-2 nucleocapsid protein permeates much slower than insulin in the small-pore branch, and therefore the small-pore branch (yellow structural colour) achieved a better separation effect than the large-pore channel (red structural colour).

In summary, our OM technology fast-tracks the photolithography methods and obviates some of the steps required in conventional microfluidics fabrication. Besides, the technology we described is applicable to common polymers. Thus, we think the OM technology offers a competitive platform for making microfluidic chips, enabling faster prototyping and design testing. We hope further studies will elaborate on the potential of the developed platform for in situ sensing and skin-contact-based applications.

For more details, please read the original version of the manuscript:

The author thanks Prof. Easan Sivaniah for fruitful discussions and Dr. H. Enis Karahan for text editing. This work was mainly supported by JST and JSPS. 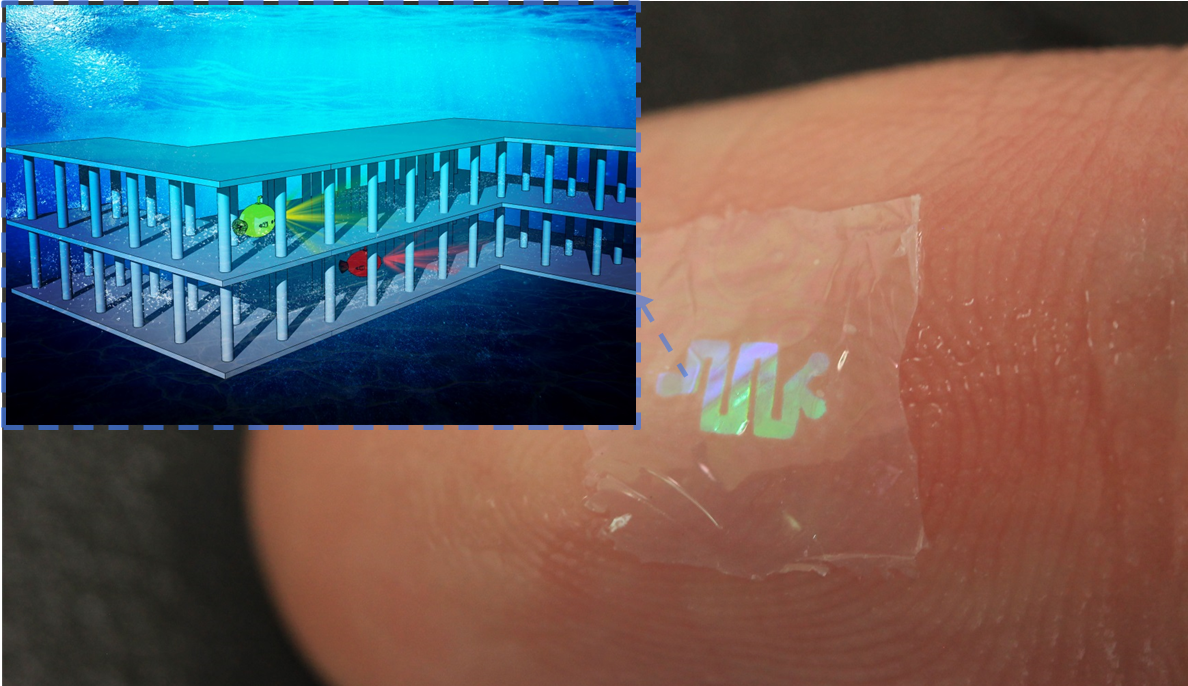 Microfluidic devices with intrinsic structural colour are created using the method of Organized Microfibrillation. The made channels have multilayered porous structures self-enclosed in the polymer film. Poster image is an artistic rendering of fluorescent probes flowing through the porous channels.