Our journey of understanding an unexpected finding of a strong drive of an electron spin in silicon that has implications on quantum computing based on silicon.
Tuomo Tanttu
Research Fellow, Diraq/UNSW
Follow
Like Liked by Evelina Satkevic and 1 other
0

At Diraq, a University of New South Wales spinout company founded by Professor Andrew Dzurak, we develop quantum computers based on silicon. The basis of the semiconductor industry, silicon is one of the most scalable ways to build a full-scale quantum computer in the coming years [1]. It is a great scientific and engineering endeavour that requires significant effort from the individuals involved. While pushing the limits of the known, we inevitably discover new phenomena, some of which can lead to new applications. In our newest publication, we show results from an unexpected finding that led to a measurement campaign of its own that gave us exciting new prospects for full-scale quantum computing [2].

Our qubit system, shown in figure 1a, works as follows: the gate electrodes on top of our silicon-silicon dioxide heterostructure are used to induce quantum dots where electrons are trapped. The spin of the electron is used as a qubit. This electron sits in a static magnetic field and can be driven with an oscillating magnetic field from a nearby antenna. The electron spin rotates when the frequency of the driving field matches the Larmor frequency of the electron spin—leading to a process known as Rabi oscillations.

Our story starts in mid-2020, when Dr Wee Han Lim and I were studying the interaction between two neighbouring qubits in a new device. We chose a fixed oscillating pulse that would rotate the spin from down to up. We then scanned the frequency of the drive and the voltage of the interaction coupling gate. As predicted, there were two peaks in the signal corresponding to the two qubits. Then by increasing the gate voltage, we expected these signals to diverge due to the two-qubit exchange interaction. This is where our experiment took an interesting turn.

While increasing the voltage on the intermediate gate, suddenly our signal for one of the qubits started to broaden and blur as seen in figure 1b. Initially it seemed problematic; something was disturbing the drive. Since we were interested in operating in this range of gate voltages for the experiment, we tried to figure out how to circumvent this weird behaviour. More careful experiments started revealing surprisingly beautiful looking patterns that we initially called ‘Butterfly’ maps (later redubbed a PESOS maps, for Pulsed Electron Spin Orbit Spectroscopy) shown in figure 1c.

Figure 1: a) Example of one of the devices used in the experiment. b) First observation of the fast qubit driving (left signal). c) A PESOS map of the speed up. d) Theoretical fit of the data showing how much speed up the spin experiences. Adapted from reference [2].

Puzzled by the data, we asked the opinion of Dr. Henry Yang from our team, and he said that the pattern meant that our qubit is actually speeding up. The fringes were caused because instead of rotating the spin just once from down to up, the same microwave pulse was causing the spin to rotate  down to up and then back down, and so forth. Since the pulse duration was constant, it meant that our Rabi oscillations were getting faster and not by just a little—but by up to 10 times faster (see Figure 1d). This is exciting news since the Rabi speed limits the clock cycle of a quantum computer. Additionally, the rotation speed-up could be turned on and off with our gates by applying different voltages on them. This switching could be very fast (operation principle shown in Figure 2a), allowing us to perform fast gates based on this phenomenon, and then turning it off to make our qubits less sensitive to noise. Our finding seemed to have potential use after all, as long as we could reproduce it for all qubits.

We still had two important questions: 1) What causes the speed up? and 2) Is it reproducible in other quantum dots? Our key observation was from another experiment where we showed that the speed up happens close to the point where our dots' internal energy levels are the same. Dr Andre Saraiva and PhD student Mengke Feng had a close look at the data and came up with the conclusion: Near the orbital degeneracy, the electron can start ‘rattling’ within the dot due to the residual electric field that is caused incidentally by the antenna. The rattling greatly enhances the Rabi speed, and it indicates that it should be possible to control electrons purely electrically.

To confirm the interpretation of the speed up, we tuned the other qubit to also have an orbital degeneracy and observed a speed up once again. Indeed, we were spot on! We now knew not only what caused this speed-up, but also how to search for configurations that led to it. Armed with this information, Dr. William Gilbert replicated this result in a new device. And then another. At this point, William was confident to take a stab at getting rid of the antenna altogether and configured the fourth device to test whether it was possible to drive the spin using only an AC electric field. This would be a major milestone which removes the need for bulky magnets in the device.

Figure 2: a) Operating principle of switching of the fast drive. b) A schematic of a quantum computer where the fast electric operation is turned on at sites when needed. Adapted from reference [2].

Once the voltage region with speed up was found, William started blasting AC electric fields through the gates. To our astonishment not only did it work, but he also broke the speed record for an electron spin qubit. Additionally, together with PhD student Jonathan Huang, they showed that it can be driven electrically with essentially no loss in control accuracy! A reproducible, fast, accurate, and all-electric spin drive enables much simpler architectures with our technology, a sketch of which is shown in figure 2b. It was now clear that we had stumbled upon something new and special, worthy for the community to know.

Involving numerous people, our almost 2-year long campaign to tame this electrical control was both challenging and exciting at the same time. Doors have now opened to further explore the possibilities of this phenomenon; it could be used for instance to couple spin qubits to cavities and between each other. 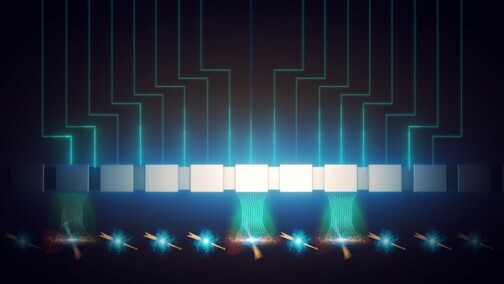 Our journey of understanding an unexpected finding of a strong drive of an electron spin in silicon that has implications on quantum computing based on silicon.