Designing photo-sensitisers with high open-circuit voltage (Voc) is desirable to enhance the power conversion efficiency (PCE) of co-sensitized solar cells. Here, the authors employ a judiciously tailored organic sensitiser MS5 with copper electrolyte to achieve a Voc of 1.24 V, and recorded PCE of…

At the École Polytechnique fédérale de Lausanne (EPFL) we are deeply involved in the transition towards clean and renewable energies, as well as the fourth industrial revolution, with the intense research activity ongoing in the field of dye sensitized solar cells (DSSCs).

Mesoscopic dye-sensitized solar cells have attracted large  attention because of their advantages; bifacial light harvesting, semitransparency, aesthetically pleasing appearance, and cost-effective fabrication, making them more suitable than conventional PV for power distributing applications such as as glazing or other building integrated photovoltaics (BIPV). In 2021, DSSCs have hit the best certified power conversion efficiency (PCE) of 13.0 % on NREL’s efficiency chart attained by our group, breaking the decade-old world record of 11.9% obtained by the Japanese Sharp company in 2011. DSSC also surpass competing PV technologies in ambient light harvesting leading to a number of commercial products in particular electronic devices such as earphones and E-readers where DSSC have replaced batteries as electric power source.

We notably concentrate our work force on device and materials engineering, as they constitute key steps in improving the efficiencies but also in making the DSSC technology widespread and readily available. Conveniently for our research team, the very peculiar architecture of the device allows us to tune the performances of solar cell via either one of its four main components: TiO2 layer, dye, electrolyte and counter electrode.

In our recently published study, we decided to use the concept of “less is more”, as guideline in the design of sensitizers for DSSC applications. At the heart of the story lies the dye coded MS5 (Figure 1a). This small but potent sensitizer only comprises a strongly electron donating tri-aryl amine unit, decorated with lengthy n-dodecyl aliphatic chains, and a minimalist benzo-thiadiazole-benzoic acid acceptor/anchor. These two building blocks were very conveniently assembled via a judiciously designed one pot synthetic route, up to the gram-scale. MS5 strongly contrasts with other organic dyes of the donor-acceptor type published in the current literature because they often comprise complicated structures accessed via lengthy and sometimes non-scalable synthetic methods.

In our study, MS5 was used in conjunction with [Cu(tmby)2]+2/+1 (tmby = 4,4’6,6’ - tetramethyl - 2,2’-bipyridine), an organo-metallic coordination complex redox couple, that effectively prevents undesirable potential losses. Throughout the study, MS5 turned out to be a very versatile sensitizer with this copper-based electron shuttle. Firstly, as a standalone dye in devices illuminated under AM1.5G conditions, it produced an impressive 1.24 V open-circuit voltage (Figure 1b), that constitutes a record in the DSSC field. Secondly, when used as a co-sensitizer with the commercial dye XY1b, it enables a record efficiency of 13.5% under AM1.5G. As a cherry on the cake, this device showed  excellent operational stability as it remained stable during light soaking at full solar intensity at 45 °C for 1,000 hours.

In the perspective of machine to machine communication and internet of things, DSSCs hold an important role as potential power sources for energy-autonomous devices that require relatively low power consumption. We therefore pursued the story of MS5 by testing its performances under such ambient light  or  indoor conditions. Along with XY1b (Figure 2a), this new small sensitizer offered very impressive performances with notably a power output of 109.7 µW·cm-2 and photovoltage of 0.98 V, in a 2.8 cm2 device, as displayed on Figure 2b. Remarkably, the DSSC retained its initial PCE after 500 hours under continuous illumination by the indoor light suggesting a promising potential for applications.

Our study provides a unique take on the field of dye design. It demonstrates that unconventional dye architectures can be used to specifically target the promising indoor applications of DSSCs. We hope that our work will inspire both academic and industrial DSSC researchers, with the endgame being the establishment of this solar cell technology as a major actor in solving the ongoing energy crisis while participating to the new technological revolution. 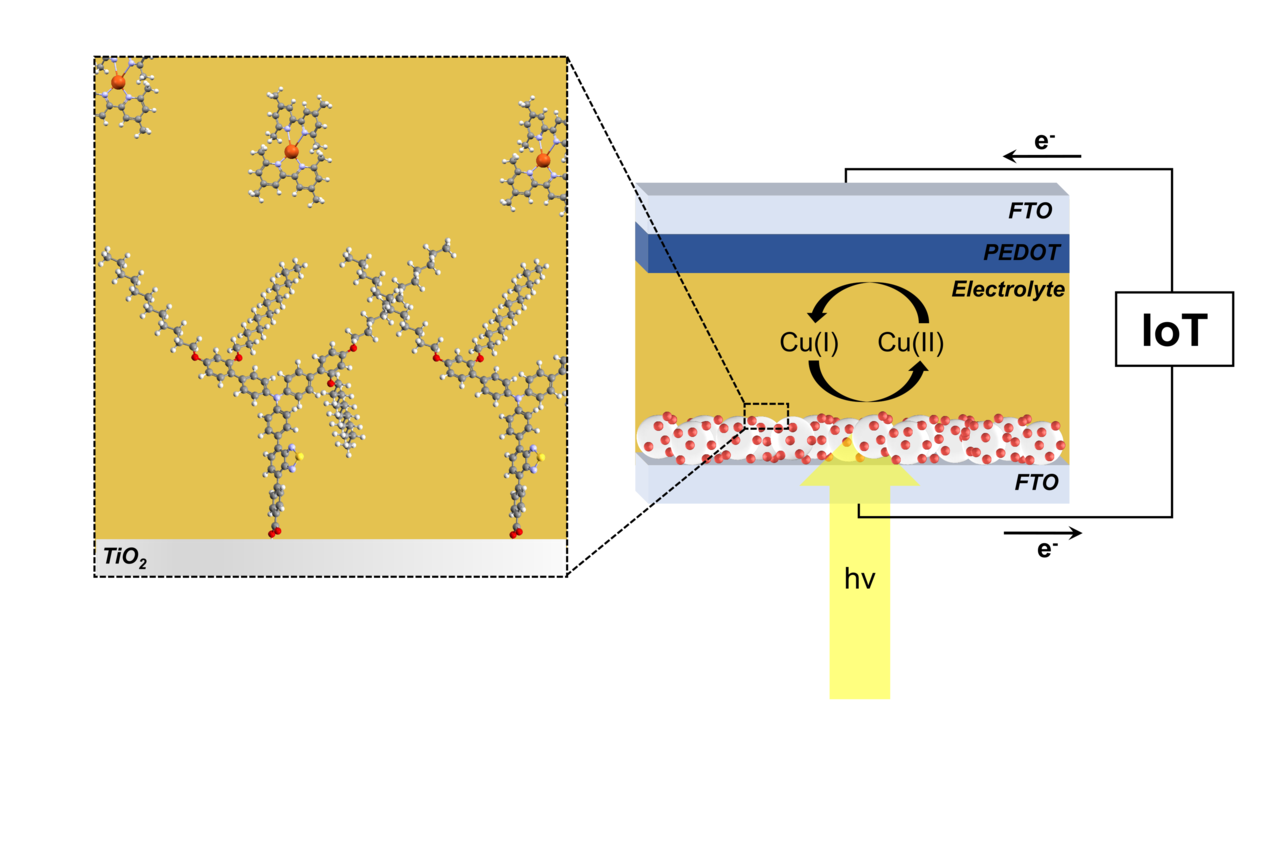