Through-plane conductivity in anion-exchange membranes is useful in fuel cells as it aids movement of ions between electrodes. Xin Liu, Michael D. Guiver and coworkers use ferrocenium polymers and magnetic field to orient ion channels and achieve high stability by formation of a mixed-valance state

We address this challenge to make TP-aligned channels in a paramagnetic ferrocenium AEM by using a magnetic field. Such strategy extends our recently developed membrane materials with both magnetic responsiveness and conducting ability for the proton exchange counterpart (Nature Communications, 2019 10, 842; Energy & Environmental Science, 2020 13, 297‒309). High-molecular-weight backbone-chemically-inert poly(vinyl ferrocene) (PF) is synthesized according to Figure 1. Ligand exchange on PF activates the alkyl-substituent effect to improve stability and provides the corresponding ligand-exchanged PF (LPF). Partial oxidation (i.e. ionization to create a positive charge) from ferrocene to ferrocenium renders polymers with appropriate ion exchange capacity, which aims to balance satisfactory conductivity with appropriate dimensional swelling and mechanical strength. The partially ionized PF and LPF are exchanged to hydroxide counter ions, denoted as PF-OH and LPF-OH, respectively. 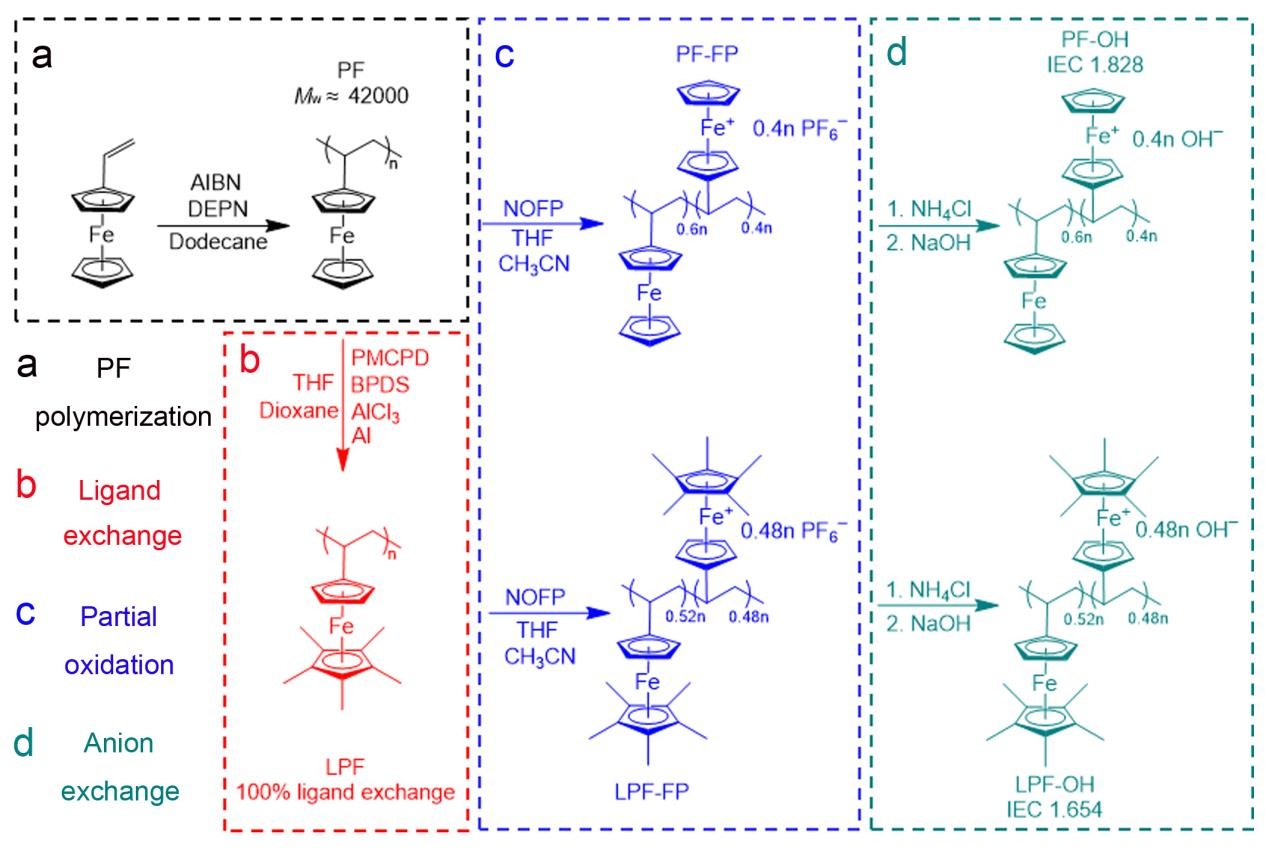 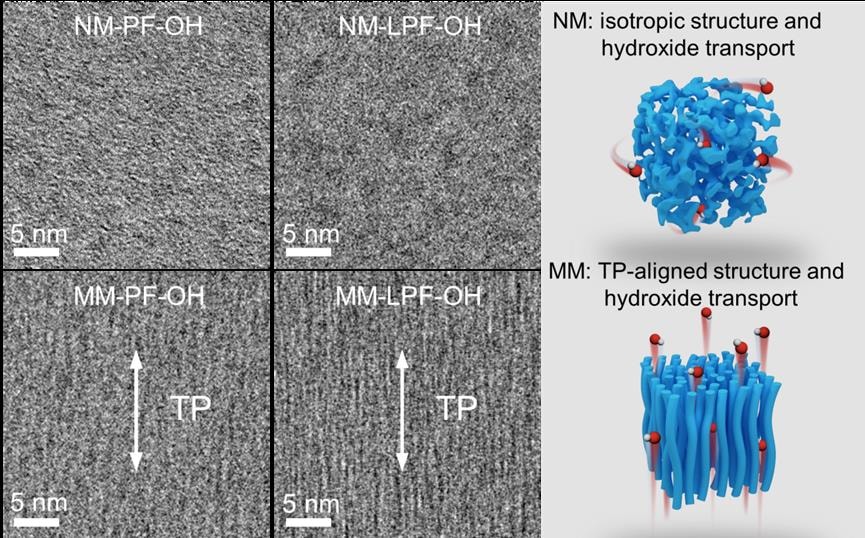 Figure 2. TEM images and graphical illustration for the microstructure of NMs and MMs

MMs with TP-oriented channels have remarkably higher hydroxide ion conductivities (σ) in the TP direction than the IP direction (Figure 3), with σTP/σIP ratios of 8.9 ~ 36.8, depending on the temperature. The σTP/σIP ratio for MM-LPF-OH is also slightly higher than MM-PF-OH, because of the higher degree of polymer orientation. Moreover, the TP hydroxide ion conductivities of MMs vs. NMs are 3.1 ~ 6.3 higher at various temperatures, suggesting more efficient transport across the membrane in an AEMFC configuration. 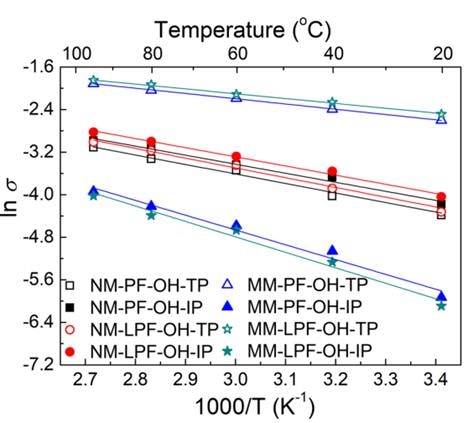 Figure 3. Comparative Arrhenius plots of TP and IP OH− conductivity of NMs and MMs in water. The magnetically-aligned membranes show remarkably higher conductivity in the TP direction compared with the IP direction.

Apart from high anion conductivity, alkali stability is of vital importance for AEMs. The majority of AEMs employ quaternary ammonium (QA) anion-conducting groups, which usually have inferior alkali stability, especially at elevated temperatures. Current studies on AEMFCs mostly employ operating temperatures of 60 ~ 80 oC, which are less realistic temperatures for practical operation. The importance and benefits of elevating AEMFC operating temperatures to at least 80 oC, and preferably higher has been well recognized by some of the influential AEMFC research groups and by the US Department of Energy. This calls for effective materials that can withstand use in AEMFCs running at higher temperatures. Gratifyingly, the ferrocenium-based AEMs in this work appear to satisfy this very demand. On the one hand, the particular nature of this ferrocenium metallocene salt may allow higher temperature endurance; on the other hand, the magnetic field-induced mixed-valence state facilitates improved alkali stability. Thus, the magnetic field applied on this ferrocenium system has a dual function, contributing to both conductivity and stability. The MMs may allow a higher AEMFC operating temperature of 120 oC, while achieving substantial durability (Figure 4), where the low extent of both voltage loss and high frequency resistance (HFR) are evident. Higher operating temperature suggests a possible paradigm shift to circumvent the long-standing temperature limitations for AEMFC operation due to the use of conventional QA-based AEM/ionomer materials. 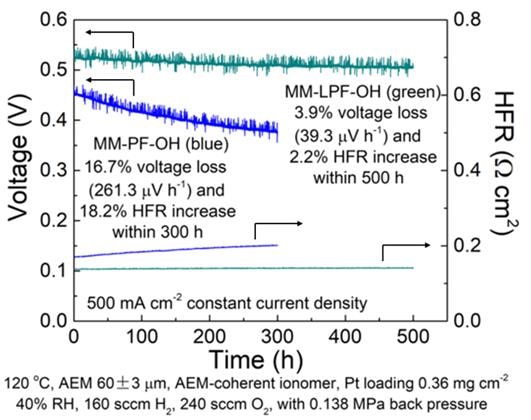 The TP-oriented morphology structure and mixed-valence metallocene chemical structure is an alternative approach for performance optimization in AEMs beyond conventional phase-separated morphology strategies. The magnetic field-induced mixed-valence state displays unexpected alkali and redox stability, which is not accessible under normal conditions, giving an instructive perspective toward further materials innovation. Due to the wide practicability of AEMs in fuel cells, as well as CO2 and water electrolyzers, this archetypal material may also find utilization in various fields of renewable and clean energy. Moreover, other areas that require oriented mass transfer, including battery separators and membranes, may see substantial performance improvements if oriented transport channel structures could be constructed.

To conclude, this work reveals promising avenues for developing next generation AEMs with an attractive combination of high performance and robust durability. Several original scientific contributions to AEMFC research field are: (A) magnetic field to create oriented AEM ion transport channels, (B) much higher membrane conductivity in the TP versus IP direction, (C) no appreciable conductivity loss for the duration of the longest alkali stability test reported so far, (D) simultaneous improvements in membrane conductivity and stability, (E) lowest AEM thickness-normalized HFR beyond those with phase-separated morphology, and (F) AEMFC operation and substantial durability at 120 oC and 40% RH, which are the harshest conditions and highest temperature reported until now. Operating AEMFCs at elevated temperature (120 oC) and low RH (40% RH) may lead to a number of further possible benefits. These may include, (A) promoting the reaction kinetics on electrodes, (B) mitigating catalyst poisoning by CO and membrane carbonation from CO2 by high temperature desorption/purging, (C) reducing water flooding in the anode, (D) enhancing water diffusivity through the membrane, overcoming water management issues, (E) improving the efficiency of waste heat utilization because of a bigger temperature difference between cell stack and coolant, and (F) simplifying of cooling and humidifying systems.