A microscopic robotic device is remotely controlled in two dimensions in all three degrees of freedom independently by the interaction between unfocused light and four plasmonic nanoantennas.
Xiaofei Wu and Bert Hecht
2 contributors
Like Liked by Sorrel Bunting and 2 others
0

Speaking of drones seen in our daily life, people would most likely think of quadcopters (Fig. 1, left), a type of aircrafts that have four propellers on two diagonals, with sizes ranging from a few centimeters to more than a meter. Being widely used for movie filming, parcel delivery, light show, automated farming, environmental monitoring, etc., or just as toys, quadcopters are probably the most numerous type of aircrafts in the world. There are two reasons for such widespread applicability. First of all, quadcopters can be maneuvered in all six degrees of freedom of rigid body motion in 3D (3 translational + 3 rotational ones, the latter being yaw, pitch and roll), which most of other aircrafts cannot achieve. This feature makes quadcopters very versatile for various applications. If you have ever played a quadcopter, you would perhaps agree with us that even controlling the flight in all degrees of freedom is already a lot of fun. Second, in spite of the full control degrees of freedom, the control mechanism of quadcopters is yet very simple. All control is based on merely adjusting the rotation speed (i.e., power) of each propeller. The two pairs of propellers on both diagonals differ in the chirality and rotation direction, such that the in-plane rotation (yaw) of the quadcopter can be controlled by adjusting the ratio of the two opposite rotation speeds of the propellers. Other degrees of freedom can be addressed by adjusting the balance of the lift of the propellers. The simple control mechanism is important because it makes device miniaturization possible, which further leads to low weight and low cost. Smaller size and lower weight usually correspond to larger acceleration and therefore faster response. Such a property together with the full control degrees of freedom thus enables using a fast feedback control loop (using built-in sensors) to stabilize the motion, position, and orientation of the aircraft. This feature further promotes a lot the applications of quadcopters.

The importance of the two aspects of quadcopters, i.e., full control degrees of freedom and simple control mechanism, also reveals a promising direction for the development of technology for the manipulation of microscopic objects using light, a topic emerging from the pioneering works on optical tweezers by Arthur Ashkin (Nobel Prize Laureate 2018). It is nowadays well known that forces occur when light is scattered or absorbed by interaction with matter because of momentum conservation. For microscopic objects, optical forces are large enough to generate very significant accelerations. However, using light to control object motion in all degrees of freedom still remains quite challenging. Optical tweezers represent the current paradigm of optical manipulation and correspondingly have found successful applications, but they require a diffraction limited focus with very high light intensity and offer only limited orientational control. Optical micro/nano motors directly generate forces or torques when illuminated and thus can be used to drive microscopic objects with unfocused light fields. However, devices based on optical motors reported to date have still been on a very simple level, i.e., they were quite bulky and were lacking the possibility of systematic steering. Until half a year ago, control of devices based on optical motors was still limited to only one or even half degree of freedom (one dimensional translation or rotation, back and forth or unidirectional).

Being researchers in the field of optical nanoantennas, we once came to a question: Since optical antennas can very efficiently scatter or absorb light, why don’t we use them as optical motors to actuate micro-objects? In particular, there is big room to optimize such motors by making use of advanced antenna design. For example, certain types of optical nanoantennas could efficiently scatter light to a desired direction to generate directed recoil force. Nanoantennas could also be designed such that they react to different degrees of freedom of the excitation light, such as wavelength, polarization and spatial phase distribution (so called spin and orbital angular momentum). We soon realized that by taking advantage of this we may be able to use several motors and each motor could be addressed individually with unfocused light, that is, different from optical trapping, the response of the motors would be independent of their position within the illumination region. Furthermore, if the motors are driven by the circular polarization components of the excitation light, due to the rotational symmetry of the light field, the response of the motors will even be independent to their in-plane orientation as well. All these ideas eventually led us to a device design that is very similar to a quadcopter, in the sense that both have two pairs of individually addressable motors with opposite chirality (Fig. 1, right), both can be maneuvered in all degrees of freedom by only adjusting the power of each motor, both can be very compact, and feedback control for stabilization is possible for both. We therefore call such devices “microdrones”.

The key to the success of this study was the nanomotors. Right from the beginning of our investigations it was clear that we would look for motor structures that react to circularly polarized light. Initially we thought that optical spin-momentum locking would provide a route towards a motor structure, since this effect induces a selective spatial directionality (momentum of photons) in correspondence to the helicity (spin of photons) of light. Yet, it eventually turned out that it was difficult to build efficient motors based on this concept. Luckily, when collecting papers for a journal club, Xiaofei found the nice paper by Lu et al. (Nature Communication 2016, 12994), where the authors reported the chiral response of an antenna consisting of two weakly coupled orthogonal metallic rods for detecting light ellipticity. After reading this paper, he soon got the idea of adding additional rods to the antenna to create circular polarization-dependent directional scattering. The directionality works similar as for the well-known Yagi-Uda type antennas in which a driving element is supplemented by passive director and reflector elements that lead to directional emission due to interference. Xiaofei then did some quick simulations in a couple of days, and the results turned out to be very convincing. Clear dependence of optical forces on wavelength and circular polarization was seen and the peak forces were remarkably large. However, because at that moment we were still trying to get the spin-momentum locking structures to work since we deemed the concept to be very elegant, it took more than one and half years until we finally followed up the idea of the new structures. As soon as the new motor structures were implemented, the project started to proceed very well, although there were still quite some challenges for the microdrone fabrication (Fig. 2), including the patterning of the motor structures and transfer of the microdrones from substrate into a water cell. It was also very challenging to measure the wavelength-dependent scattering pattern of the nanomotor to obtain an experimental confirmation of the simulated force spectrum of the nanomotors.

Utilizing the new nanomotors, we gradually achieved rotation, one-dimensional translation, one-dimensional translation + rotation (start of using two lasers), and finally two-dimensional translations + rotation. During this period, there were two papers published (Science Advances 2020, eabc3726 and Nature Nanotechnology 2021, 970–974), which deal with the same topic and are to some degree similar to our idea. Nevertheless, our microdrones still exhibit novel and more advanced performance, since this is the first time that full and independent control of all three degrees of freedom of 2D motions is achieved using unfocused light fields, and it is also the first time that multiple nanomotors integrated into the same microscopic device can be driven and addressed individually using circular polarization components of two wavelengths. Moreover, the microdrones remain very small in size.

As the next step, we are going to implement automatic feedback loops to control the 2D motion of our microdrones. This will be important for stabilizing the position and orientation against the influence of Brownian motion that represents the major disturbance for these microscopic objects. Once this is achieved, we will start to realize 3D control with all six degrees of freedom. We already have rough ideas how motors for 3D motions should be composed, which most importantly would not need additional light sources. Imagine that one day our microdrone can hover in water with very stable position and orientation, just like the quadcopters, and with effects of Brownian motion nearly completely suppressed. This fact itself would already be fantastic and very cool and we hope that many intriguing applications will be implemented using our microdrones. We look forward to that day. 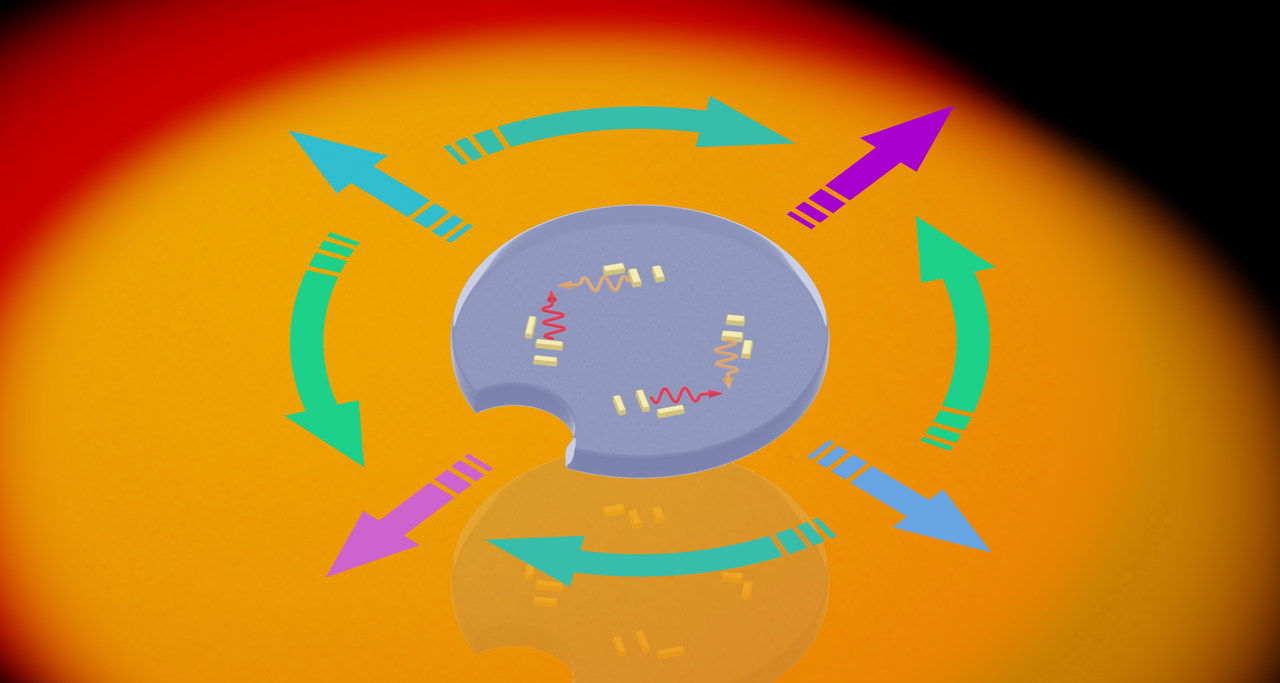