Interlayer excitons in two-dimensional materials: could it be the answer for compact room-temperature infrared photodetector?

Formation of interlayer excitons with high oscillator strength in a WS2/HfS2 heterostructure enables the realization of high-responsivity room-temperature mid- and long-wavelength infrared photodetectors.

Scientists from Agency for Science, Technology, and Research (A*STAR), in collaboration with the National University of Singapore, Nanyang Technological University, Technical University of Denmark, and Institute of Physics in Taiwan, have demonstrated the interlayer excitons in two-dimensional materials as a means to achieve efficient infrared photodetector, and potentially photoemitter, that can be readily integrated into opto-electronic devices.

The discovery of the Scotch tape method, which enables the isolation of a single atomic layer of carbon ‘graphene’ in 2004 at the University of Manchester,  has fueled many interesting discoveries of two-dimensional (2D) materials. The method is so simple and effective that this area of science has grown rapidly, and now hundreds of laboratories around the world are exploring different aspects of 2D materials. One family of 2D materials, transition metal dichalcogenide (TMDC), has received considerable attention due to their semiconducting property. Because of the high surface to volume ratio, the interfaces involved in TMDC play a predominant role in influencing the material property, such as the bandgap, exciton diffusion, and charge transfer at the interface, to mention a few.

Vertical stacks of different types or layers of TMDC allows scientists to create new materials with new optical and electronic properties. Such stacks, called van der Waals heterostructures because layers stick to each other via this weak interaction, offer freedom in combining different crystals from the wide-catalogue of available 2D materials, including those with different crystal lattice, which is not possible to achieve in conventional growing methods.

In 2D materials, the optical response is defined by excitons, electron-hole pairs bound by Coulumbic interaction, due to the strong quantum confinement and reduced dielectric screening. Therefore, the electronic band-structure hybridisation and the periodic variation of the symmetry of the local atomic arrangement in TMDC can be monitored and studied using these bosonic quasiparticles. In heterostructures, this gives rise to a newly discovered exciton, known as the interlayer excitons (ILEs), of which the electron and hole located in the adjacent layers of dissimilar 2D materials. ILEs are strongly bound and long-lived. ILEs are essentially spatially-oriented electric dipoles with repulsive interactions that prevent the formation of complexes (biexcitons) at high density. Moreover, the photoactive range of ILEs is determined by the band-energy alignment of the constituent material, thus makes them ideal for optoelectronic applications.

The limiting factors in the development of infrared photodetectors are the choice of available materials and the intricate crystal growth process. Moreover, thermally activated carriers enforce low operating temperatures of infrared photodetectors. Here we demonstrate infrared photodetection enabled by ILEs generated between tungsten and hafnium disulfide, WS2/HfS2. The photodetector operates at room temperature and shows an even higher performance at higher temperatures owing to the large absorption coefficient and phonon-assisted optical transition. The unique band alignment in the WS2/HfS2 heterostructure allows interlayer bandgap tuning from the mid- to long-wave infrared spectrum. We postulate that the sizeable charge delocalization and ILE accumulation at the interface results in a greatly enhanced oscillator strength of the ILEs and a high responsivity of the photodetector.

The sensitivity of ILEs to the thickness of two-dimensional materials and the external field provides an excellent platform to realise a robust tunable room temperature infrared photodetector, and potentially as a photo-emitter.  However, the potential does not end here. The versatility of ILE in 2D heterostructures is not limited only to two materials (AB stacking). We can create a more sophisticated structure either ABA or ABC stacking by adding another similar (ABA) or dissimilar (ABC) material on top of the second material. The ABA stacking potentially produces a ‘quantum well’ structure, which could increase the efficiency further from AB stacking. Whereas ABC stacking allows the simultaneous formation of two different types of ILEs, which could be tailored for either dual photo-detection or -emission system. 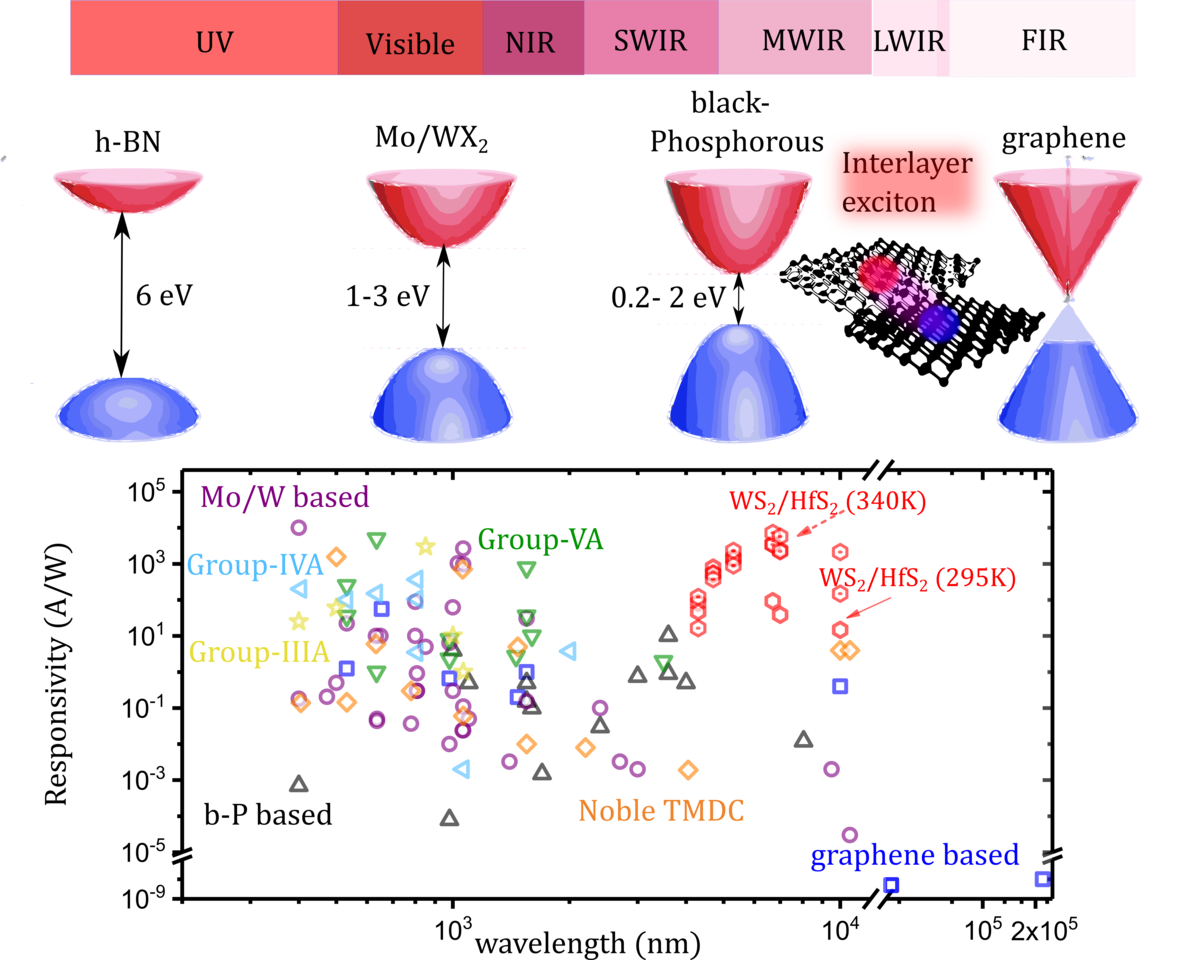 Interlayer excitons in two-dimensional materials: could it be the answer for compact room-temperature infrared photodetector?