A highly reliable artificial neuron is demanding to build neuromorphic computing hardware. Here, we develop a new dynamic memristor crossbar array with high reliability and a self-rectifying characteristic, which can be used as a reliable neuron component for neuromorphic computing.
See-On Park
Researcher, KAIST, professor Shinhyun Choi's lab
Follow
Like Liked by Evelina Satkevic and 3 others
0

In contrast to traditional von-Neumann computer-based AI, neuromorphic computing is a novel computing paradigm that directly mimics the learning mechanisms and operations of biological neurons and synapses. As a result, it can realize extremely energy- and time-efficient AI. Various complementary-metal-oxide-semiconductor (CMOS) based neuromorphic processors have been developed to implement neuron functionalities into electrical hardware. However, CMOS-based neurons and synapses are usually very large and energy-hungry because they are composed of complex CMOS circuitry. Therefore, there have been intensive trials to implement neuron functionalities into a single electrical device, which may reduce the energy and area requirements for an artificial neuron.

In this study, we developed a highly reliable memristor (Pt/gradual oxygen concentration TiOx/Ti) that possesses low cycle-to-cycle and device-to-device variations (1.39% and 3.87%, respectively), self-rectification property, forming-free property, and a high on/off ratio (> 2,000). The oxygen anion distribution change in the TiOx layer with gradual oxygen concentration makes a reliable and high dynamic resistance switch. The developed device has a volatile resistive switching characteristic where the device conductance gradually reduces for about 40 ms after potentiation. Based on the reliable volatile dynamic resistive switching characteristic, we built an artificial neuron by connecting the memristor with a capacitor in parallel. The developed neuron shows a leaky-integrate and fire (LIF) property, which is a representative biological neuron behavior with high spatio-temporal uniformity; the neuron’s characteristics are not changed during the intensive voltage pulse tests, and a reliable excellent device-to-device uniformity is measured from randomly selected artificial neuron devices.

Furthermore, to test the newly developed device beyond the single-cell level, a passive 20 × 20 memristor crossbar array, without selecting devices such as transistors, was fabricated with 100% yield. Because the developed memristor has a self-rectification property, every device in the crossbar array is not interrupted by each other and the device conductance state. This self-rectification property enables the device conductance state to be accurately read without interference from other cells (so-called "sneak-path" problem). We demonstrate that every device in the array uniformly operates and that the device in the array shows similar behaviors to the stand-alone device. A neuro-memristive computing system which trains anti-microbial peptides (AMPs)’ amino-acid sequences and generates new AMP sequences has been simulated based on a model of the developed memristor. Based on the reliable volatile dynamics of the memristor in the crossbar array, the memristors process the sequence information of the AMPs, and a simple multi-layer perceptron (MLP) based read-out function trains its weights by predicting the next amino acid. After training the weights in the read-out function, the neuro-memristive computing system can generate new AMP sequences when a ‘seed’ amino-acid is given. We demonstrate that the real AMPs and the newly generated AMPs have similar peptide structure, molecular weight, hydrophobicity, and composition.

Owing to the reliable characteristics of the developed memristor, it is possible to build a novel electric hardware with large-scale integrated artificial neurons in near future, which has been blocked due to the device's non-idealities. We believe that the developed highly reliable dynamic memristor can be utilized in various applications such as short-term memory device, artificial nerves for robotics, or neuromorphic systems using biologically plausible learning rules, and that it will expand the AI hardware from digitalized computing processors to the analog and biomimetic neuromorphic hardware with better energy-efficiency and smaller device size. 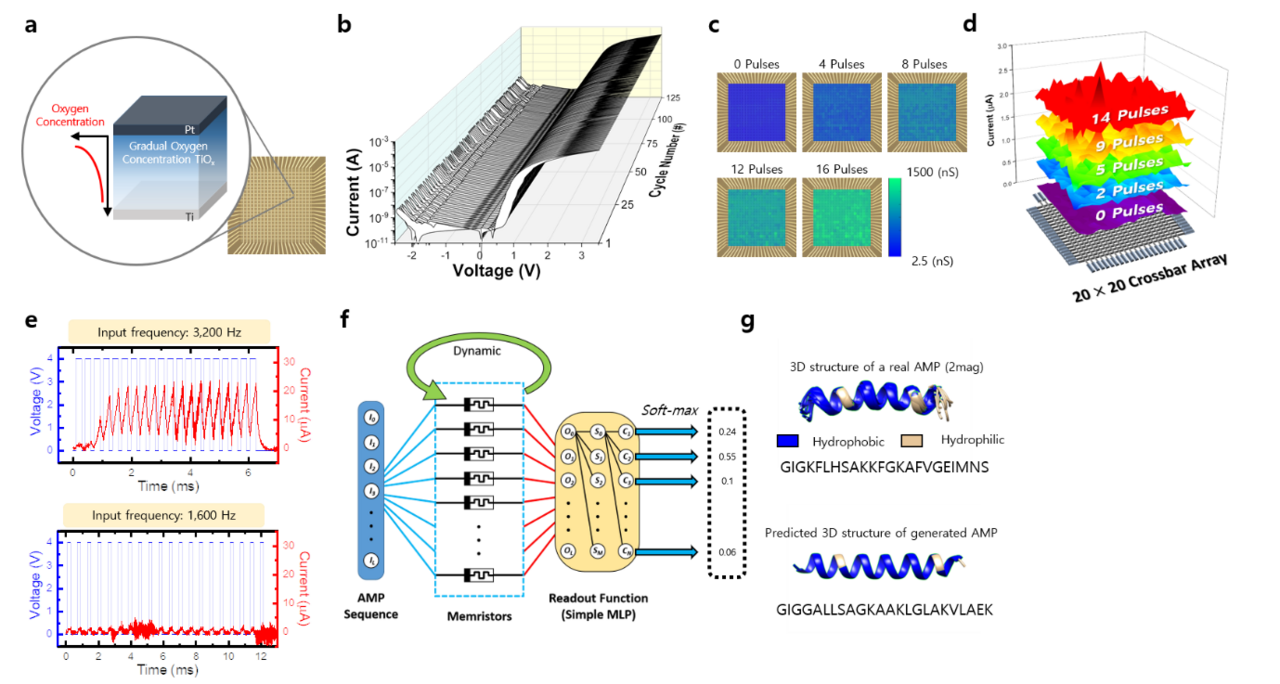