The operation mechanism of most conventional gas sensors is based on chemical reactions that are often slow and power hungry. This set us thinking on another route for realizing microscale gas sensors using microscopic nanoporous graphene membranes.

Already in 2013 first ideas emerged of utilizing the permeation rate of gases as a method to determine their composition. With funding from the EU Graphene Flagship project, NWO and the Kavli Institute of Nanoscience at TU Delft we started exploring the possibility of creating small nanopores in graphene membranes. Via the workpackage sensors of the Graphene Flagship we got into contact with Prof. Marika Schleberger, and started a collaboration with her group to make such nanopores by perforating graphene membranes using highly energetic ions in the GANIL accelerator and focused ion beam.

In order to measure gas permeation rates, we needed a methodology to pump the gas through the nanopores and at the same time detect the gas flow rate. One might do that with a separate pump, a gas-flow meter and a porous graphene membrane. However, this solution would be relatively large and expensive and would moreover require large porous graphene membranes with many identical pores, since otherwise flow rates would be too hard to measure.

We realised that instead, the graphene membrane itself could be utilized simultaneously as a gas pump and a pressure detector, using the deflection of the graphene membrane to detect the gas permeation-time through the nanopores. The observed gas dependence of the permeation-time, shown in our publication today, is clear and allows us to distinguish different types of gases, including noble gases that are usually hard to detect by chemical techniques. The size of the device is really small: the graphene membrane pump is only 5 micron in diameter, with a membrane thickness of less than a nanometer and pores of 25 nm, while the gas volume pumped through the pores per pumping cycle of 10 microseconds is estimated to be only 20 attoliter.

But why does the permeation time actually depend on the type of gas? To understand this, it is important to note that the average molecular energy is roughly the same for all gases according to the equipartition theorem. However, kinetic energy depends on mass, so molecules with different masses will have different speeds. If the molecules move faster, they will have a higher probability to disappear through the nanopore and therefore will show shorter permeation time-constants, this is called Graham’s law. You might compare it to a room in which a cloud of insects fly randomly around. If you open a window, the fastest types of insects will have disappeared much sooner than the slow insects.

For the future we think of making the nanopores in our devices so small that certain molecules cannot permeate at all from them, this would allow for significantly larger differences in permeation rate and thus improve the selectivity of this gas sensing mechanism, such that it eventually might even end up in your mobile phone, so you can always monitor the air quality around you. 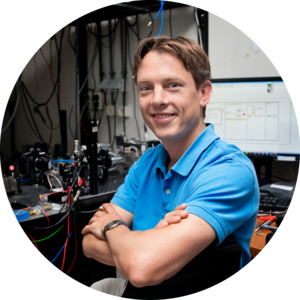