Graded bulk-heterojunction for the future of Organic solar cells

Organic solar cells (OSCs) have attracted considerable interests due to their advantages of light weight, low-cost and mechanical flexibility. Non-fullerene acceptor (NFA) based bulk heterojunction (BHJ) OSCs have made great progress in power conversion efficiencies (PCEs) over 18%. Morphology manipulation of BHJ active layer is the key to further improvement of PCEs in OSC, which yet requires delicate optimization processing methods, such as additives, solvent engineering, thermal annealing or solvent annealing. In the fullerene dominant OSC era, beyond BHJ, sequential deposition (SD) strategy has also been demonstrated to be effective to tune vertical phase separation, thus leading to comparable PCEs. To be specifically, it is preferrable   with higher acceptor (A) concentration near the cathode and more donor (D) composition at the anode, and the vertical graded D-A distributions are more amenable to forming so-called p-i-n structure. We also been contributed several SD studies in fullerene OSCs (Nanotechnology 2009, 16, 165202 (Yang, Li et al.); Nanotechnology 2014, 25, 295401 (Li et al.)). In this Nature Commun. paper, we further investigate the less studied SD strategy in forming NFAs based graded BHJ OSCs, where the understanding of SD strategy is still at the infant stage and lacks a clear and quantitative morphological picture. Furthermore, the absence of a rational guideline for solvent selection so far makes the fundamental mechanism underlying the SD film formation ambiguous.

First, we found that the SD OSCs based on the PM6:BTP-eC9 have achieved over 17% when choosing o-xylene (XY) and chloroform (CF) as the top layer solvent, but tetrahydrofuran (THF) and chlorobenzene (CB) failed, which arose our extensive interests in finding out the guidance of solvent selection rule towards valid NFA-based SD OSCs. For that, we conducted depth-profiling X-ray photoemission spectroscopy (DP-XPS) technique to investigate the vertical phase separation. Consequently, the graded polymer composition distribution throughout the whole film was observed in both XY and CF processed film, which is found to be the successful underlying mechanism for valid SD OSC, and thus the graded BHJ (G-BHJ) concept was functionally proposed. The results above provide solid evidence of two successful yet distinct pathways towards valid G-BHJ morphology: 1) high boiling point solvent features longer time for interdiffusion between A and D, yet limited solubility indicates smaller penetration rate of A, leading to proper degree of A’s interdiffusion into D domain (XY-case); 2) low boiling point solvent enables shorter time for A to penetrate downward, yet good solubility provides larger penetration rate of A, reaching similarly functional interdiffusion of A into D domain (CF-case). Hence, the vertical composition profiles of A and D can be finely regulated by the penetration rate and time. Overall, by delicately tailoring the balance of solubility and boiling point of upper solvent, G-BHJ would be expected to be formed. Additive engineering provides a further dimension of morphology manipulation as mentioned before. This offers an elegant guideline of solvent selection rule for rational G-BHJ morphology formation by tuning the interdiffusion between A and D. 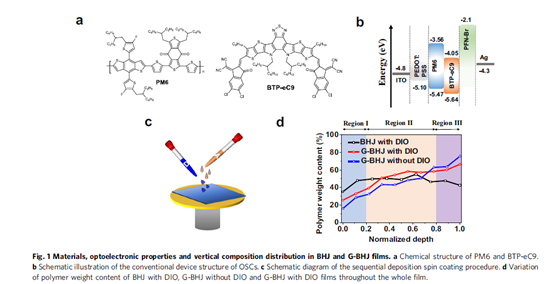 Furthermore, depth-resolved grazing incidence X-ray diffraction (GI-XRD) measurements by varying incident angle show that gradient polymer composition and crystallinity distributions are quantitatively visualized: less polymer and weaker crystallinity at the cathode side, while more polymer and stronger crystallinity at the anode side, (and vice versa for acceptor), which is significantly different from that of traditional BHJ blend. G-BHJ strategy provides insightful morphology-property relationship, enabling highly efficient state-of-the-art NFA OSCs to go even further.

More excitingly, owing to the prominent morphological feature of G-BHJ in thin film, we further proved the excellent performance of G-BHJ strategy in the thick-film OSCs that are critical for future industrial manufacture. As expected, 300 nm-, 400 nm- and even 500 nm-thick G-BHJ OSC all achieved excellent efficiencies, which are among the best values for thick OSCs. Also, we successfully transferred the spin coating processing to blade coating processing via G-BHJ strategy assisted by novel air knife quenching, enabling G-BHJ OSCs from XY and CF to deliver over 16% PCE. Therefore, G-BHJ strategy is proven a feasible and promising strategy towards highly efficient, eco- and manufacture friendly OSCs. Excitingly, the G-BHJ is found to be compatible to other material systems (PM6:IT-4F and PCE-10:IEICO-4F), showing better generality in both coating techniques and D/A combination. 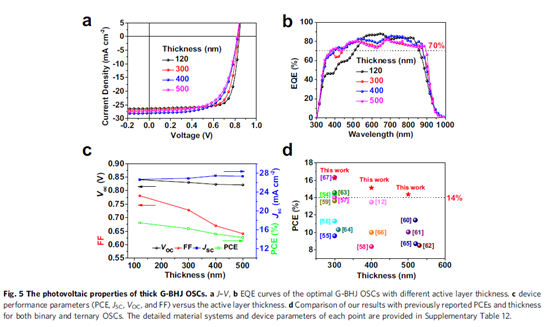