The operation of almost all today’s semiconductor electronic components relies on the mechanism of external electric-field gating on the channel width. As the reduce of scale, the fabrication of CMOS device is not only limited by the fabrication techniques at such a small dimension, but also some basic physics principles such as leakage field, breakdown of dielectrics etc.. As a completely different principle of operation, interface engineering by local polarization using piezoelectric, pyroelectric and ferroelectric effects has attracted much attention as promising approaches for tunable electronics/optoelectronics, human-machine interfacing and artificial intelligence.

Fortunately, I joined Prof. Zhong Lin Wang’s group to study the piezotronics, which is an emerging field of interface engineering by coupling of piezoelectricity and electronic transport process in piezoelectric semiconductor. The strain/stress induced piezoelectric polarization charges at metal-semiconductor interface can effectively modulate the Schottky barrier height by exerting substantial influences on the concentration and distribution of free carriers at the interface, so as to control the transport process of charge carriers. This is the piezotronics 1-4. However, the piezotronics manifested only in non-centrosymmetric semiconductors, especially in the third generation semiconductor, such as wurtzite structured ZnO and GaN, which limits their application in the first and second generation semiconductors such as Si, Ge and GaAs. Thus, we wondered whether there was a way that could introduce a same or similar modulation effect in centrosymmetric semiconductors. This is our original idea.

As we know, flexoelectricity is an electromechanical property that reflects a coupling between local electrical polarization and a strain-gradient that enables mechanical manipulation of polarization. The strain-gradient can break any materials’ inversion symmetry owing to distorted crystal structure by strain, resulting in a polarization with a preferred direction and enabling a piezoelectric-like response but containing no piezoelectric elements. In particular, the demonstration of giant flexoelectric effect in semiconductors is instructive 5, which provides a method or approach for our original conception.

a range of length/volume, which will have a huge impact on the concentration and distribution of free carriers at the metal-semiconductor interface as well as inside the semiconductor, resulting in (i) the interfacing metal-semiconductor band-structure engineering and (ii) the inner-crystal band-structure engineering. Thus, the strain-gradient-induced flexoelectric polarization can effectively modulate the interface Schottky barrier height and width, so as to control the electrical transport. Using inner-crystal flexoelectric polarization potential as a ‘gate’ controlling signal to modulate the barrier profile and achieve tunable electronic process is the flexotronics (Figure 1). As a result, we demonstrated a giant flexotronic effect in bulk centrosymmetric semiconductors of Si, TiO2 and Nb-SrTiO3 with high strain sensitivity. The flexotronic effect can also be used to mechanically switch the electronics in nanoscale with fast response and high resolution.

This work opens up the possibility to realize strain-modulated electronics in centrosymmetric semiconductor, paving the way for local polarization field-controlled electronics. This study can also stimulate some new researches on semiconductor-based flexoelectric technology, such as enhanced solar technology, stretchable electronics/optoelectronics and hybrid-spintronics/-valleytronics (Figure 2). 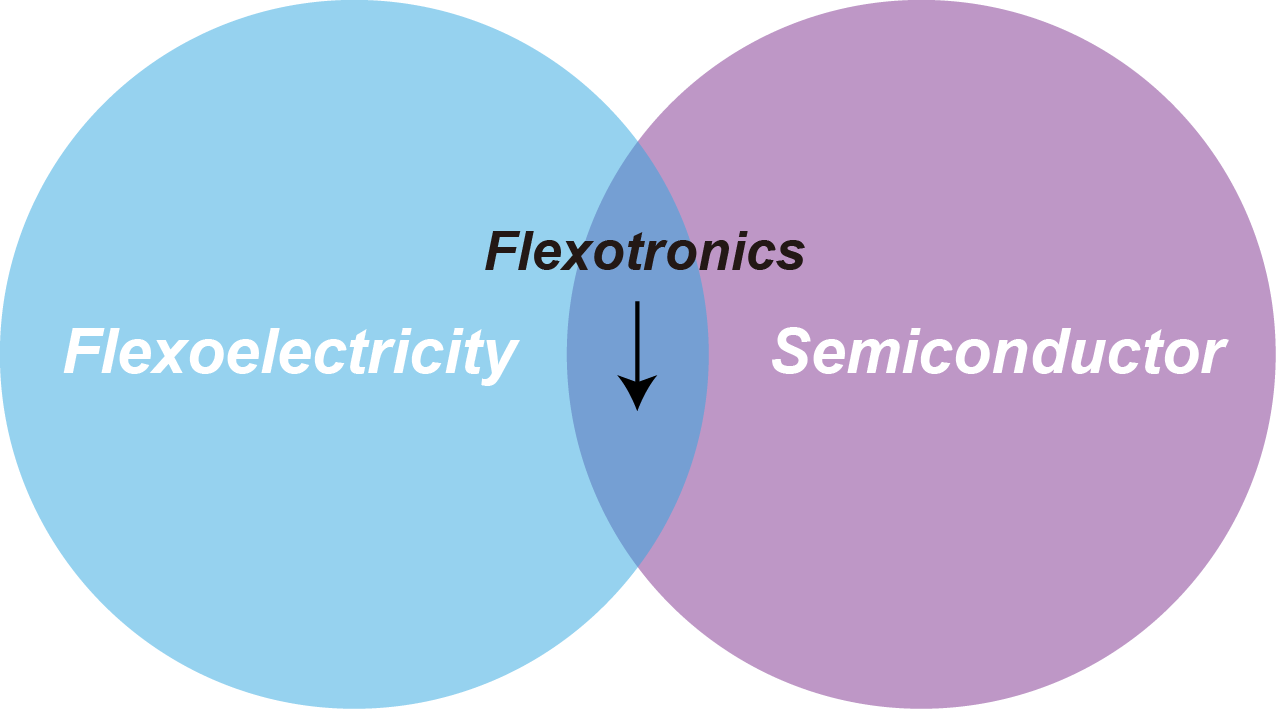