In the past more than 110 years since the report of Chichibabin type diradical, these open-shell polycyclic aromatic hydrocarbons have been extensively studied (Figure 1a). Unlike the conventional closed-shell organic semiconductors (OSCs), the weak intramolecular electron pairing in these diradicals enables new phenomena and optoelectronic properties at the forefront of research efforts in diverse fields such as chemistry, materials science and condensed matter physics (Chem. Rev. 2013, 113, 7011–7088, Nat. Chem. 2018, 10, 1134-1140) and application of these materials (Chem. Soc. Rev. 2012, 41, 303–349, Chem 2021, 7, 288-322).

In the recent 30 years, OSCs have witnessed a dramatic development, with impressive demonstrations of new functionality, devices, and commercial applications. One of the most successful engineering of OSCs has relied on utilizing electron-rich donors (D) and electron-deficient acceptors (A) to construct D-A materials with strong intramolecular charge-transfer interactions. However, while these D-A OSC materials with narrow bandgaps exhibit high charge transport, chemical stability and promising performance in organic light emitting diodes, organic photovoltaics, infrared organic photodetectors, organic field-effect transistors and other emerging technologies, there are still many complexities associated with developing a cohesive relationship between electronic structure and performance. Numerous efforts have been focused on the development of novel material systems and excited states. Differing from the open-shell radicals mentioned in Figure 1a, donor-acceptor (D-A) type narrow bandgap OSCs are commonly viewed as closed-shell structure. However, the nature of the ground state electronic structure of narrow bandgap D-A OSCs is often overlooked as alternative lines of thinking and previous reports have attributed the presence of their radicals and the associated ESR signals to the trapped oxygen, impurities, defects, polarons, or other species.

In our previous work, we reported the common intrinsic diradical character of the D-A conjugated organic semiconductors and proposed the quinoid-diradical resonance structure to understand the intrinsic radical ground state and the thermally-excited triplet state in 2017 for the first time (Figure 1b, J. Phys. Chem. C 2017, 121, 8579–8588). It noteworthy that Prof. Bhanuprakash and Wudl reported the open-shell diradical ground state of narrow bandgap oligomers and polymers based on benzobisthiadiazole (BBT) before 2017 (J. Phys. Org. Chem., 2011, 24, 821-832, J. Polym. Sci., A: Polym. Chem., 2015, 53, 287-293). These reports only demonstrated the open-shell diradical character of BBT-based organic semiconductors (Figure 1c). However, comparing with their work, our group systematically studied and proposed that all the narrow bandgap D-A OSCs show open-shell singlet ground state (Figure 2).

To further investigate the driving force for the formation of quinoid-diradical, the underlying mechanism is still needed to be established. Our group focused on the investigations of electronic structures of neutral D-A organic semiconductors in the past 4 years. This international collaborative effort addresses this nascent challenge, namely through the demonstration of open-shell D-A OSCs with an articulation of structure-property-electronic topology relationships in these materials (Figure 2).

Our work and approach are unique in the following aspects: i) the diradical resonance form is widespread in narrow bandgap D-A OSCs such as those commonly employed in the fabrication of high-performing organic devices; ii) articulate clear connections between the bandgap, π-extension, structural and electronic features with the degree of diradical character; iii) and the rational regulation of diradical character in narrow bandgap materials (y0 = 0.223 → 0.665) stabilized in an intrachain donor-acceptor structure. Their electronic structures are extensively characterized and verified through electron spin resonance, magnetic susceptibility, nuclear magnetic resonance spectroscopy, and single crystal X-ray diffraction (Figure 3). Theoretical calculation is applied to disclose the evolution of the electronic structure elucidating and the design guidelines to achieve open-shell character in this ubiquitous class of materials. Comparing with previous pro-aromatic or quinoidal Kékulé-type diradicaloids with limited stability in air, the D-A diradicaloids exhibited good stability and promising application potential in various fields. In this work, this study is focused to overcome significant and historically rooted challenges associated with open-shell OSCs and provides new scaffold to view the physical process of these important OSCs (Figure 3).

We believe this work is important because it demonstrates a significant advance to provide bottom-up approaches to tune and characterize the ground states of narrow bandgap D-A OSCs and new understanding of the relationship between molecular structure and electronic topology. It will not only provide new platform for fundamental investigations of chemical bonding and electron pairing in the most typical D-A organic material systems, but will also present the basis for new generation of emergent application in new fields such as spintronics and others. 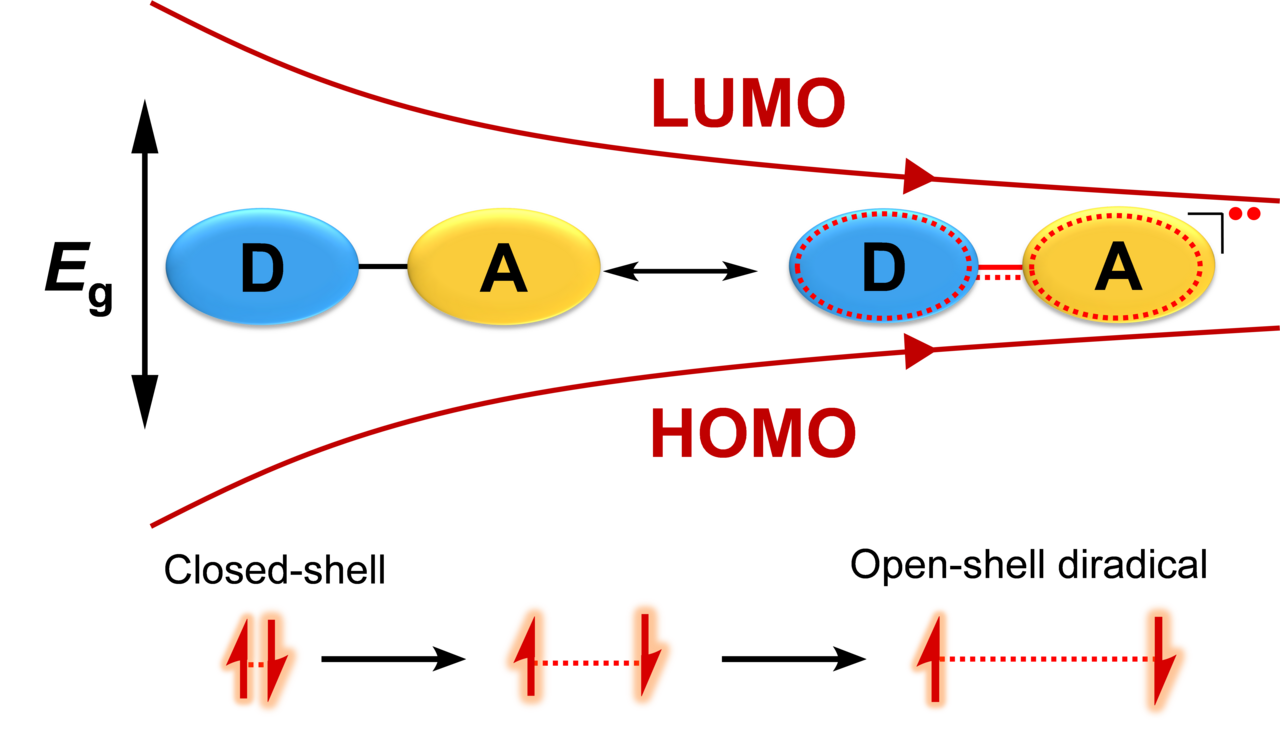