A community from Nature Research
Contributor Scientific Reports
Behind the Paper

In our recent paper “Evidence of Biorealistic Synaptic Behavior in Diffusive Li-based Two-terminal Resistive Switching Devices” in the journal Scientific Reports, we investigate the electrical characteristics that give rise to biorealistic synaptic behavior, in our latest approach to Li+-based two-terminal resistive-switching devices. With respect to our previous endeavor with binary, Au/LiCoO2/SiO2/p++-Si two-terminal (vertical) resistive-switching devices, a new approach has been undertaken, initially to mitigate their switching instabilities, by introducing a TiO2 anode layer between the SiO2 electrolyte and the p++-Si bottom electrode. Interestingly enough, besides the superior stability of this newly devised architecture, evidence of biorealistic synaptic behavior emerged through the combination of field-driven ionic diffusion, non-filamentary resistive-switching and nanobattery effects.

Since our initial research endeavor during the early memristor era, experimenting with the prominent solid-state-battery cathode LiCoO2, Li+-based resistive-switching devices have now become one of the most promising candidates in neuromorphic computing applications. Today, the majority of LiCoO2-based devices adopt a three-terminal architecture, while the literature on vertical two-terminal LiCoO2 devices remains scarce.

Led by the fact that highly-stoichiometric LiCoO2 exhibits an insulator-to-metal transition (IMT) under chemical or electrochemical Li+ content removal, back in 2011 we utilized the benefits of pulsed laser deposition (PLD) to produce actively-switching high-quality layered hexagonal LiCoO2. Moreover, we showed that voltage-controlled Au/LiCoO2/SiO2/Si two-terminal thin-film devices present binary resistive-switching through the reversible Li+ ion migration and the concurrent IMT in the LiCoO2 layer. In 2015 we made observations of memristive and neuromorphic behavior in such LiCoO2-based nanobatteries and in 2018 we presented direct evidence supporting the relation between the voltage-controlled resistive switching and Li+ ion migration in such devices.

Embracing our initial conception that such battery-like thin film devices, based on an actively switching cathode (LiCoO2), a solid electrolyte and a Li-accepting anode, would be more likely to present a homogenous instead of a filamentary RS mechanism, thus enabling more controllable and scalable architectures, we ardently devoted our research to two-terminal LiCoO2-based RS systems, collecting bits and pieces regarding their underlying mechanisms.

Mitigating the switching instabilities and moderate endurance of these devices, was one of our key priorities. Inferring that these weaknesses derived from the Si anode used at the time, the introduction of a new anode became imperative.

Being an emerging Li+-accepting anode material for thin film Li-ion battery applications, with enhanced stability at high rates of lithiation/delithiation cycling, TiO2 became our material of choice in replacing the previously used Si.

Once the device was competed and the structure was identified through Grazing Incidence X-Ray Diffraction (GIXRD), we proceeded to its electrical characterization through standard I-V sweeping. Surprisingly, not only were the derived I-V hysteretic curves more consistent, compared to our previous devices, but also the resistive-switching occurred in a non-abrupt manner. In addition to the latter, the observation of an area-dependence of the magnitude of switching with the top Au electrode, strongly suggested that indeed the underlying mechanism is of a non-filamentary nature. Furthermore, the occurrence of a non-zero crossing I-V characteristic after a resistive switching event, attributed to the nanobattery effect, and the strong current rectification at positive bias, signifying a diode-like behavior, painted the picture of a fairly versatile ionic switch.

A pivotal experiment, regarding the device capabilities, was the consecutive cycling with solely negative biases and subsequently with positive biases. These measurements indicated the device’s ability for analog conductance modulation alongside a spontaneous conductance relaxation attribute. From that point on, things became fascinating.

Stimulating the device with voltage pulses trains, we managed to trigger analog conductance enhancement, depression and also monitor the spontaneous conductance relaxation. From these measurements, it became evident that the conductance relaxation was predictable, following an exponential decay function, with a time constant of several seconds, and relied on the device’s internal ionic dynamics.

The combination of analog conductance modulation and predictable conductance relaxation effects resulted in a pulse-width- and pulse-spacing-dependent degree of stimulation. These in turn allowed the device to present biorealistic synaptic plasticity and enabled the emulation of spike-timing- and frequency-dependent plasticity.

In essence, biorealistic synaptic behavior is the ability of a device to produce similar learning rules/behaviors to those known from neuroscience to be occurring in the brain, that is, by regulating the relative timing and direction of signal spikes at a synaptic node. In our case, these were achieved by simply controlling the frequency and polarity of voltage spikes.

We strongly believe that embracing established notions from neuroscience for the development of devices and networks with biorealistic capabilities is of great value for the future of truly bioinspired neuromorphic computing paradigms. Even though we are still at the beginning of a steep-slope learning curve regarding the biorealistic capabilities of these versatile ionic switches, the future of this research endeavor is undeniably promising.

Dealing with such a demanding subject, that requires broad understanding in the fields of materials science, electrochemistry, microelectronics and neuromorphic computing engineering, entails a holistic multidisciplinary approach. Thereby, all data that have been presented in the paper “Evidence of Biorealistic Synaptic Behavior in Diffusive Li-based Two-terminal Resistive Switching Devices” and in its Supplementary Information, have been made available online and we encourage any constructive third-party data analysis. 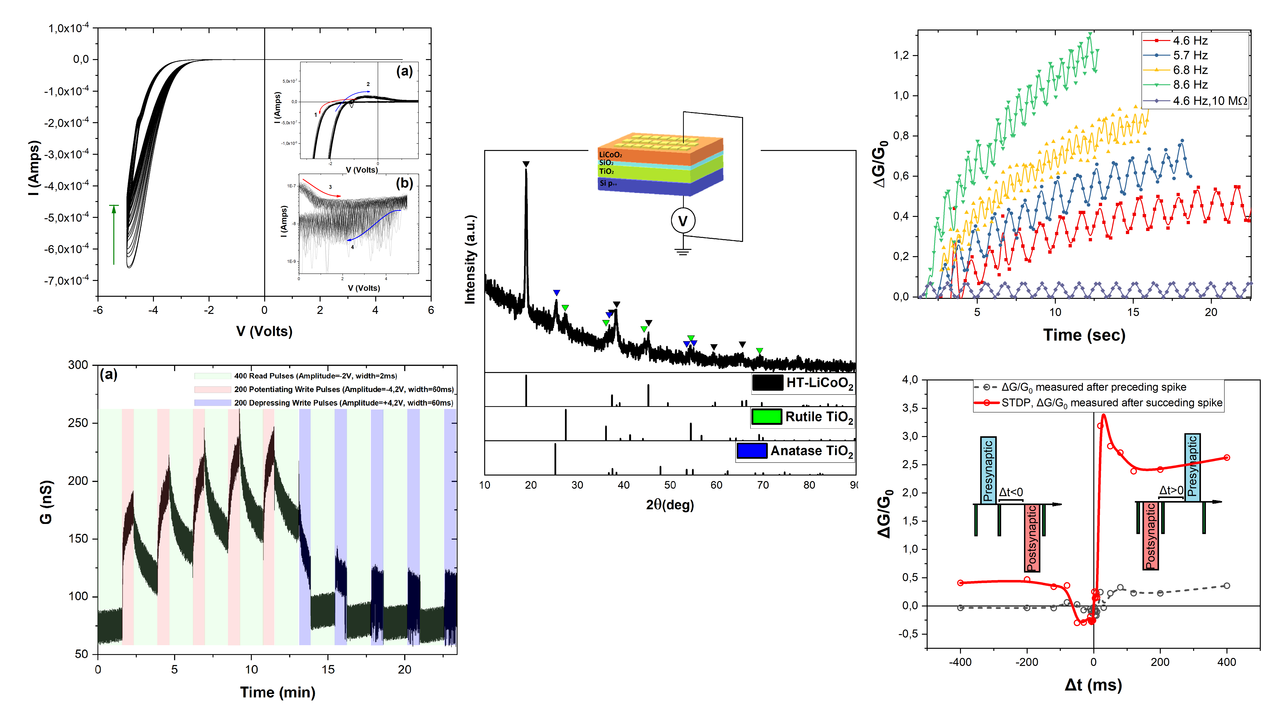