Complete mapping of the thermoelectric properties of a single molecule

We report the first 'full' thermoelectric characterization of a single molecule. Our measurements unveil the importance of electron-vibrational coupling and spin entropy in the heat to energy conversion, and indicate synthetic directions to achieve efficient single-molecule thermoelectric devices.
Pascal Gehring
Assistant Professor, UC Louvain
Follow
Like Be the first to like this
0

A measurement protocol allows the conductance and the thermocurrent of a single molecule to be determined simultaneously.

Theoretical work has long suggested that mastering the thermocurrent through single molecules holds the key to thermoelectric energy harvesting with unprecedented efficiencies. However, so far detailed experimental validation and verification of this prediction has proved elusive as studying the thermoelectric properties of a single molecule is a difficult task that requires, firstly, the possibility to precisely heat up one side of a single molecule while keeping its other side cold and, secondly, being able to accurately measure the resulting minute thermoelectric currents of femto- and pico-Ampere strength. Furthermore, tunability of experimental parameters like the temperature bias applied to the single molecule, and control of its electrochemical potential are vital for a thorough understanding of the underlying physics of thermoelectricity in such atom-small objects.

In this paper we have performed this challenging experiment by employing a novel methodology that allows us to study the electric and thermoelectric properties of a single molecule simultaneously, and over a large gate and bias voltage regime. Our experiments reveal – for the first time – the important role of the internal molecular degrees of freedom on the thermoelectric properties. In particular, by mapping out the response and obtaining  the so-called transmission function of a single-molecule, we are able to verify long-held assumptions about the interplay of electronic, spin and vibrational degrees of freedom in molecular electronics.

Our results also provide the first realistic implementation of a molecular design: we find that the thermoelectric response of a single molecule is strongly impacted by its entropy, or in other words, its state of disorder. If the entropy of the molecule changes significantly upon adding an extra electron to it (because, e.g., its spin degree of freedom changes), an enhanced thermoelectric power factor can be obtained. Thus, engineering single molecules with high spatial or spin entropies emerges as a promising way for the design of future thermoelectric energy harvesting applications and devices. 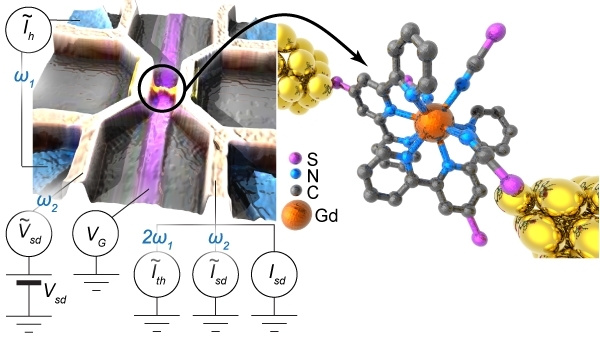 Complete mapping of the thermoelectric properties of a single molecule

We report the first 'full' thermoelectric characterization of a single molecule. Our measurements unveil the importance of electron-vibrational coupling and spin entropy in the heat to energy conversion, and indicate synthetic directions to achieve efficient single-molecule thermoelectric devices.