A highly efficient long wavelength single photon driven decaging method for a wide array of photolytic molecules was reported which is versatile and "LEGO"-like.
Gang Han
Professor, University of Massachusetts-Medical school
Follow
Like Be the first to like this
0

The use of short wavelength light in photolysis applications in chemistry and biology is limited by photolytic reaction yields, photodamage and photobleaching. Here, the authors report a general long wavelength single photon driven photolysis method using a triplet-triplet annihilation process.

Due to its precise spatiotemporal control, the use of light to activate latent properties has been of great interest in many fields, such as chemistry, biology and medicine. Unfortunately, most photo-activating systems must rely on high energy short wavelength light, such as ultraviolet or blue light. The use of such short-wavelength light has inherent problems. For example, the penetration depth of such short wavelength light through reaction media and biological tissue is low. Moreover, in biology, the current method would cause inevitable phototoxicity.

To this end, our lab has been working on inorganic upconversion nanoparticles that can transduce long wavelength light to such short wavelength emissions. Despite their promise in many other applications, short wavelength emissions in regard to the photoactivation performance of small molecules appears to be quite challenging. This inferior performance is largely due to the inherently suboptimal upconversion efficiency and significant energy loss in the relative emission and reabsorption process.

In order to find an alternative, we have been attempting to develop organic triplet-triplet annihilation upconversion materials. Dr. Ling Huang, an ingenuous postdoc in our lab, has been leading this project. As I yet recall, one day in the early summer of 2016, Ling reported an unexpected finding in his experiment. Triplet-triplet annihilation upconversion ability is quite sensitive to, and actually dependent on, the light exposure time in a homemade TTA dye pair (meso-tetraphenyl-tetrabenzoporphine palladium and ester substituted perylene).

Ling then carefully analyzed the products after light exposure via NMR and found that the ester-substituted perylene underwent a photolytic reaction. That was an ah-ha moment, when we knew that we had found something new and so we then went on to propose a triplet-triplet annihilation photolysis mechanism.

After uncovering this mechanism, we have found that this approach to be quite general and, via triplet-triplet annihilation photolysis, we have developed a versatile and efficient long wavelength single photon-like method for a wide array of photolytic molecules. This method is quite modular  and "LEGO"-like. The light partners (the photosensitizers and the photolytic molecules) can be energetically matched to adapt to an extensive range of electromagnetic spectrum wavelengths, the diversified chemical structures, photolabile linkages, as well as to a broad array of targeted molecules.

In  particular,  our triplet-triplet annihilation photolysis (TTAP), photosensitizers can absorb low energy long wavelength photons, reach their singlet excited state and subsequently populate their long-lived triplet excited state through rapid intersystem crossing. The long lifetime of this photosensitizer triplet excited state is the key to allow collisions and subsequent breakage of the targeted photolytic molecules to occur. Furthermore, in addition to the demonstration of chemistry utility, we also developed TTAP based nanoparticles and showed their immunotherapy application by the highly efficient photo-decaging of anti-cancer prodrugs to treat the metastatic tumor under a ultra-low power far red-light illumination.

In sum, our method overcomes the key problems (low effectiveness and high photodamage) in the existing photolytic methods. This method provides a simple and general solution that achieves highly effective long wavelength light driven photolysis. This method should be a game-changer in regard to setting the stage for a wide array of novel yet previously inaccessible applications in numerous areas. 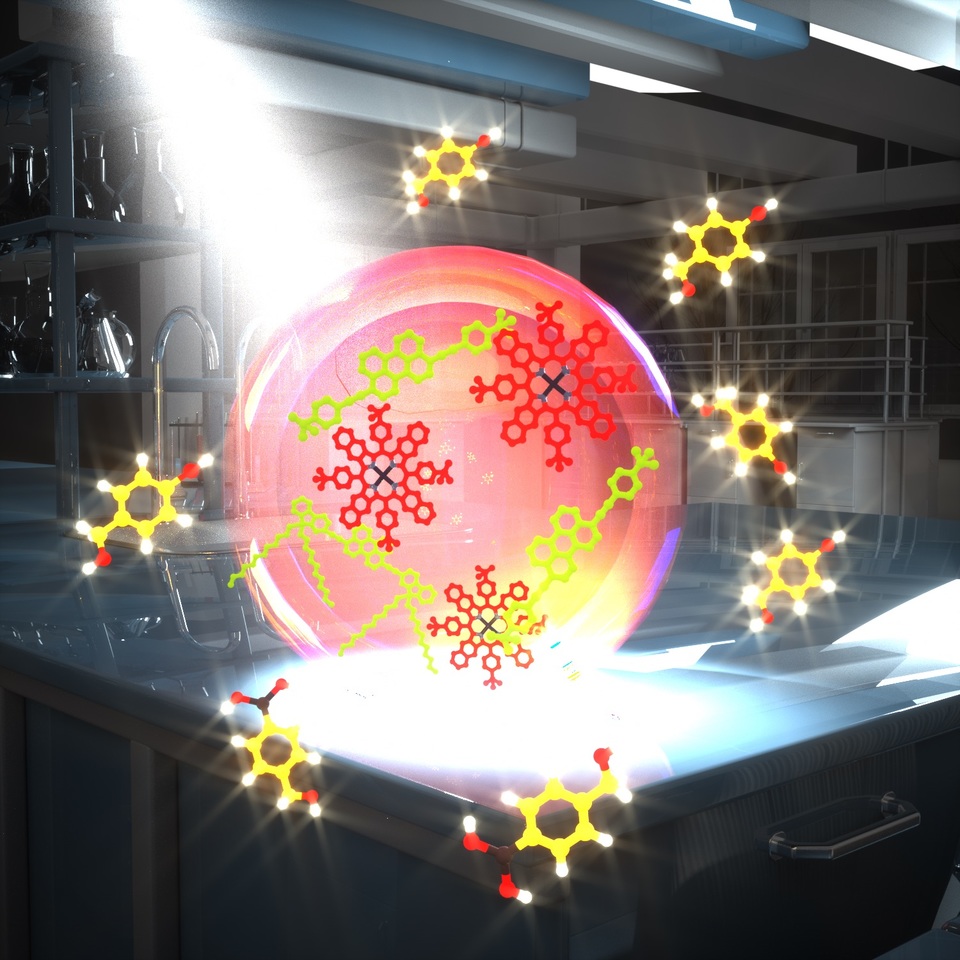 A highly efficient long wavelength single photon driven decaging method for a wide array of photolytic molecules was reported which is versatile and "LEGO"-like.