Insertion of an atomically thin interlayer, such as graphene, between a metal thin film and a substrate can be used to create flexible electrodes with electrical performance that changes only gradually with strain and is resistant to abrupt mechanical failure.

“Why is this metal electrode still conductive even with many cracks on the surface?” This was the first question I asked myself when I observed a surprisingly extended sustainability of electrical connection during bending a thin-film metal electrode where we inserted single-layer graphene between the metal and the elastomeric substrate. The answer to this question became the origin of a new term, ‘electrical ductility.’

One day, a former Postdoc, Pilgyu Kang (currently an assistant professor at George Mason University), and I were working in our lab and talking about easily breakable thin-film metal electrodes. Such electrodes are composed of gold/titanium metal films deposited on an elastomeric substrate of polydimethylsiloxane (PDMS), and we commonly used them for our graphene-based flexible sensors. He then suggested a simple idea, “why don’t we first place single-layer graphene and then deposit the metal on top, because we know graphene can endure much larger strain than metals.” The result was obvious, just like what we expected: the graphene-inserted gold electrode maintained electrical connection at a higher strain than the conventional gold electrode. However, the reason why this happens is not as simple an idea as we first thought.

After Pilgyu left to George Mason University for a new chapter of his life, I investigated in further detail why we were seeing the difference. When I looked at the fractured surface of metals with the underlying graphene under the microscope, surprisingly, there were many irregular deflected cracks presented on the metal surfaces in contrary to straight cracks developed on without-graphene electrodes. This observation raised a very interesting scientific question: why do we see relatively ductile behavior in gold-graphene electrodes? Previous studies reported that each gold (or gold with titanium) and graphene exhibit relatively brittle (straight) cracking behavior on their own when under deformation. However, when these two materials were layered, we observed ductile cracking behavior.

Our findings reveal that continuous crack deflection led by graphene-induced buckled-network effectively delays the complete disconnection across the metal surface under deformation. Such tortuous cracking also results in crack bridging between fracture domains, to which we attribute the effective conductive paths across the electrode, even as the surface fractures. It was exciting and intriguing to us that an atomically-thin layer (of less than one-nanometer thickness) could dramatically tune the mechanical and electrical behavior of metal thin films that are one thousand times thicker.

In this work we report, for the first time, substantially elongated conductance of a metal thin film when under strain (‘electrical ductility’) by modulating cracking behaviors of the metal film with the underlying 2D-interlayers. We observed a gradual change in resistance with strain and the extended region of the stable resistance as opposed to the rapid soar of the resistance observed in conventional metal electrodes. We coined this term ‘electrical ductility’ because the behavior is analogous to mechanical ductility which describes the elongation of material under strain. We believe this unique electrical behavior of metal is distinct from many previous works, particularly other nanocomposites and layered nanomaterials where the conductive nature of added secondary materials allows for enhanced electrical sustainability by providing additional conductive connections. On the contrary, we modulate the electrical behaviors of the metal thin film itself (which has high conductivity) as we demonstrated electrical ductility not only with graphene layer but also with semiconducting (MoS2) or insulating (hBN) materials. The electrical ductility is primarily caused by the unique characteristics of high strength and weak van der Waals interaction of 2D materials.

We provide a readily-applicable solution of inserting only an atom-thick interlayer to the ubiquitously used conventional metal electrodes. With our solution, we can substantially improve the electromechanical robustness of metal electrodes under multimodal deformation (with both several orders of magnitude decreased resistance and an extended region of stable resistance). We showcased the adaptability of our 2D interlayer approach by creating flexible light-emitting devices integrated with metal-2D interconnector, which showed augmented strain-resilient electrical performance under multimodal deformation.

Our findings address the outstanding unmet challenge of unexpected, complete electrical disconnection of flexible electrodes, which is commonly observed after the onset of inevitable mechanical fracture during their uses. This challenge has severely limited the functional lifespan of flexible/wearable electronics. “Our technology (‘electrical ductility’) has the potential to allow for early damage diagnosis feature in flexible devices, as it will prevent sudden and complete electrical disconnection failures. We believe our work has a broad impact on the scientific community, particularly on flexible/wearable electronics where metal thin films are used ubiquitously as system elements of electrodes and interconnectors,” quoted from my academic advisor Professor SungWoo Nam at the University of Illinois at Urbana-Champaign. Our approach could have a broad impact, helping to realize high-performance flexible devices and systems not only in consumer flexible electronics (e.g., rollable, foldable smartphones and TV) but also in emerging areas, such as flexible solar panels integrated on curved surfaces (e.g., smart buildings, electric automobile roof).

First authors of the work: 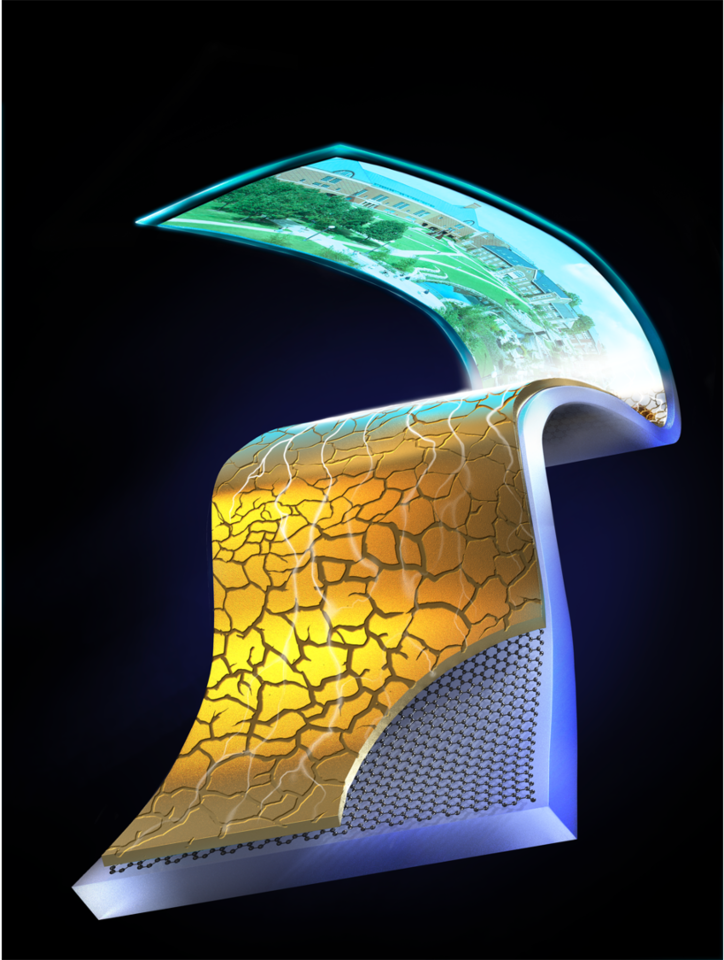 Atomically thin 2D-interlayer, such as graphene, MoS2, or hBN, inserted into thin-film metal electrodes engineers cracking behavior of the metal thin-film and results in the unique strain-resilient electrical characteristic of the extended region of stable resistance, termed ‘electrical ductility'