The meaning of Urbach energies in organic semiconductors is highly debated. Per definition, the Urbach energy is the inverse of the logarithmic slope of the sub-gap absorption coefficient and therefore a measure of its steepness. It is frequently used to quantify static disorder, which is an important characteristic to understand charge carrier mobilities and voltage losses in solar cells. As a rule of thumb, the broader the sub-gap absorption coefficient (and therefore the higher is the Urbach energy), the higher the static disorder of the organic and inorganic semiconductors.

I did not start the project with this fundamental question in mind. It evolved, rather, as a result of previous projects. From 2018, I began my work in the Sustainable Advanced Materials (Sêr SAM) group from Swansea University. In the first place, I was focused on the sub-gap absorption of charge transfer states. During that time, we endeavoured to build a sensitive external quantum efficiency (EQE, directly linked to the absorption coefficient) setup by using the LAMBDA 950 spectrophotometer as a low-optical-noise light source as proposed by the group leader Dr Ardalan Armin. This project has been later realised by Stefan Zeiske reaching an absolute EQE down to 10-9 being only limited by the electrical noise of the device under test. This enabled us to make a series of impactful observations such as strong interference effects in non-fullerene systems and later mid-gap traps states as reported by Dr Nasim Zarrabi et al.

Fig. 1 a, Experimental sub-gap normalized EQE at different temperatures of an organic donor:acceptor blend solar cell based on PM6:Y6, and the respective apparent Urbach energy (EUapp ) in the inset. b, EUapp = kT ─ 2.5 meV at higher temperatures with small energetic offset of 2.5 meV due to optical interference. c, Sub-gap absorption regimes of a low-offset blend (or neat material) organic solar cell demonstrated with the help of EUapp .

In this light, it was clear that the Urbach energy, as often obtained from the sub-gap photovoltaic EQE, is not a meaningful measure for static disorder. My supervisor, Dr Ardalan Armin suggested that I look into the limitations of Urbach energies from simple fits to the sub-gap EQE spectra. Soon after starting this project in 2020, we went into a national lockdown due to the ongoing COVID 19 pandemic and had much more time at hand to analyse sensitive EQE spectra and look behind the meaning of Urbach energy as known from inorganic semiconductors. It was clear that organic donor-acceptor blends show steeper Urbach tails when the offset between the local exciton energy and the charge transfer state energy is low. From the Urbach energy in function of energy, it became apparent that all low-offset blends show an Urbach energy of roughly kT at some energy range within the spectrum. To reflect this energy dependence and to discriminate from its conventional meaning, we, from thereon, referred to the spectrum Urbach energy as the apparent Urbach energy EUapp (E). Motivated by the experimental observations, Dr Oskar Sandberg, a post-doctoral researcher within the group, provided a theoretical explanation for the absorption rate via an extended Marcus theory and showed that a Gaussian DOS, but not exponential DOS, can produce the experimentally observed spectral lineshapes within the studied theoretical frameworks.

From an experimental point of view, we still had to prove that  EUapp (E) equals kT at different temperatures. Once our research laboratories safely reopened, I started measuring temperature dependent EQE spectra with the organic solar cells fabricated by post-doctoral researcher Dr Wei Li. The experimental EQE spectra for one example PM6:Y6 solar cell are shown in Fig. 1 a. As expected, EUapp (E) increased with temperature, but showed a material-dependent, small energetic offset from kT due to optical interference as shown in Fig. 1 b. This was supported by optical simulations and thickness-dependent EQE spectra, provided by Dr Nasim Zarrabi.

In consequence, we have demonstrated that the Urbach terminology, as used in the context of inorganic semiconductors with an exponential density of defect states, does not apply to organic semiconductors. However, from a purely phenomenological point of view, organic semiconductors show true Urbach tails with a characteristic energy of kT as originally reported by Franz Urbach in 1953. Based on our proposed model of the organic, sub-gap absorption coefficient, we can distinguish (i) the spectral range where the EQE broadening is influenced by static disorder, (ii) the spectral range where EUapp = kT and (iii) the universally observed spectral range of mid-gap trap states at the low energy end (see Fig. 1 c). 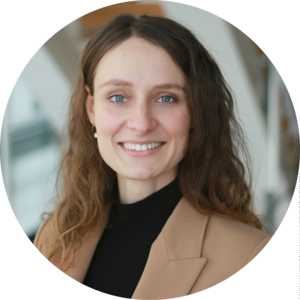