By the use of lithographically patterned strain engineering, we bring bilayer graphene into an exotic quantum state and demonstrate two Hall effects without breaking time-reversal symmetry. Now, let’s take a look back at the journey that has brought us here!
Sheng-Chin Ho
Postdoc researcher, Harvard University
Follow
Like Liked by KOSUKE TATSUMURA
0

“Think Different,” an advertising slogan used by Apple Inc, is also a motto of Prof. Tse-Ming Chen, my PhD supervisor, who used it to spark our research group’s creativity and versatility in our approach to research, and it has profoundly influenced me.

In 2017, after finalizing my studies of one-dimensional zigzag Wigner crystal detection [1], I searched for the next research focus. Graphene, a two-dimensional material, is one of the most promising directions due to its beautiful physics and great technological implications. From the first successful exfoliation of a single-layer sheet to the current state-of-art layer-by-layer stacked systems, graphene has successively demonstrated significant physics. This “wonder material” attracted me to try some exciting ideas that cannot be applied in the conventional two-dimensional electron gas system. However, the reality is always cruel. During the early stages of building our nanofabrication capability for van der Waals (vdW) devices, we were bogged down in improving graphene electronic mobility through hexagonal boron nitride (hBN) encapsulation. That was a tough period.

In an effort to improve our capabilities, I attended the 2018 APS March meeting in Los Angles to try learning vdW nanofabrication skills from the various outstanding research groups in the world. Their generosity and willingness to help laid the foundation for this work’s success and showed me the warmness of the academic community. But more importantly, in an unprecedented development, I attended a talk on the birth of graphene superconductivity in magic-angle twisted bilayer graphene by Prof. Pablo Jarillo-Herrero [2]. By precise control of the lattice angle between two monolayer graphene sheets to form a moirè superlattice, they change the interlayer coupling and hybridization to modify the electronic band structure. When the twisted angle approaches a “magic angle”, the two sheets bands hybridize into a flat band and leading to superconductivity as well as ferromagnetism a year later.

The harnessing of interlayer coupling is crucial to creating and hosting many distinctively different electronic properties in a 2D system. In the meantime, while researchers worldwide tried to discover new possibility in twistronics, Tse-Ming and I tried to think differently: can we develop a new approach to engineer the electronic band structure of 2D materials without the requirement to carefully misalign (or perhaps more precisely, “align” and “orient”), the two lattice structures? In other words, can we artificially and easily create a superlattice or structure in which the lattice has been distorted and/or misorientated to achieve a similar goal, or even something better?

After frequent discussions with many beers, we came up with an idea and a device design, to artificially create the superlattice in bilayer graphene via nanofabrication. In the prototype, corrugations are lithographically defined on the host flake (in this case, hBN). Using a pick-up and transfer technique, bilayer graphene can be placed onto patterned hBN. After transfer stacking, graphene conforms to the hBN geometry resulting in lattice deformation at each corner, spaced by the plateau and groove lengths. The strain fields are spatially separated and hence induce a net first-order moment of pseudo-magnetic field. Furthermore, we hypothetically speculated this strained graphene may affect the momentum-space Berry curvature since the spatial inversion symmetry and valley symmetry could both be broken. However, specific band models and theories were incapable of establishing this until the appearance of a lifesaver, our theoretical cooperator, Prof. Ching-Hao Chang.

It was a happy coincidence that Ching-Hao became involved at the right moment, starting his assistant professorship at National Cheng Kung University just when Tse-Ming and I were struggling to build the theory model and related calculations. Thanks to his knowledge and analytic expertise, we completed the last piece of the puzzle, the comprehensive theory model, and found fascinating results. In the lithographically defined strained graphene, the rearranged atoms change the intra- and interlayer aspects of lattice constants, giving rise to a pseudo-magnetic field and interlayer coupling. From a band structure point of view, band warping results in tilted mini-Dirac cones with Rashba-like valley-orbit coupling and the momentum-space Berry curvature dipole, which has attractive phenomena only very recently explored in emergent topological materials such as WTe2.

Using our nano-fabrication approach to creating lattice deformation, the pristine bilayer graphene is transformed into an exotic material with a noncentrosymmetric lattice and Berry curvature dipole, which has been a recent hot topic. In transport measurements, we observed a nonlinear anomalous Hall effect and nontrivial pseudo-magnetoresistance anisotropy (i.e., pseudo-planar Hall effect), without breaking time-reversal symmetry. These findings challenge the general belief that broken time-reversal symmetry is necessary for nonvanishing Hall conductivity.

In the end, we demonstrated an alternative approach to band structure engineering through controllable nanofabrication and van der Waals layer stacking. The heterostructure stacking is no longer limited by periodic lattices, while the substrate topography can be arbitrarily defined via nano-lithography, and furthermore can approach 2.5D and 3D patterning. In corrugated bilayer graphene, the consideration of symmetry and equivalence of valley symmetry are severely broken, resulting in two emergent Hall effects. This type of device platform opens possibilities for research into geometrical and topological phenomena. It turned out that thinking outside the box led to very interesting research.

If you are interested in learning more about the scientific detail of this topic, please read our paper in Nature Electronics: https://www.nature.com/articles/s41928-021-00537-5 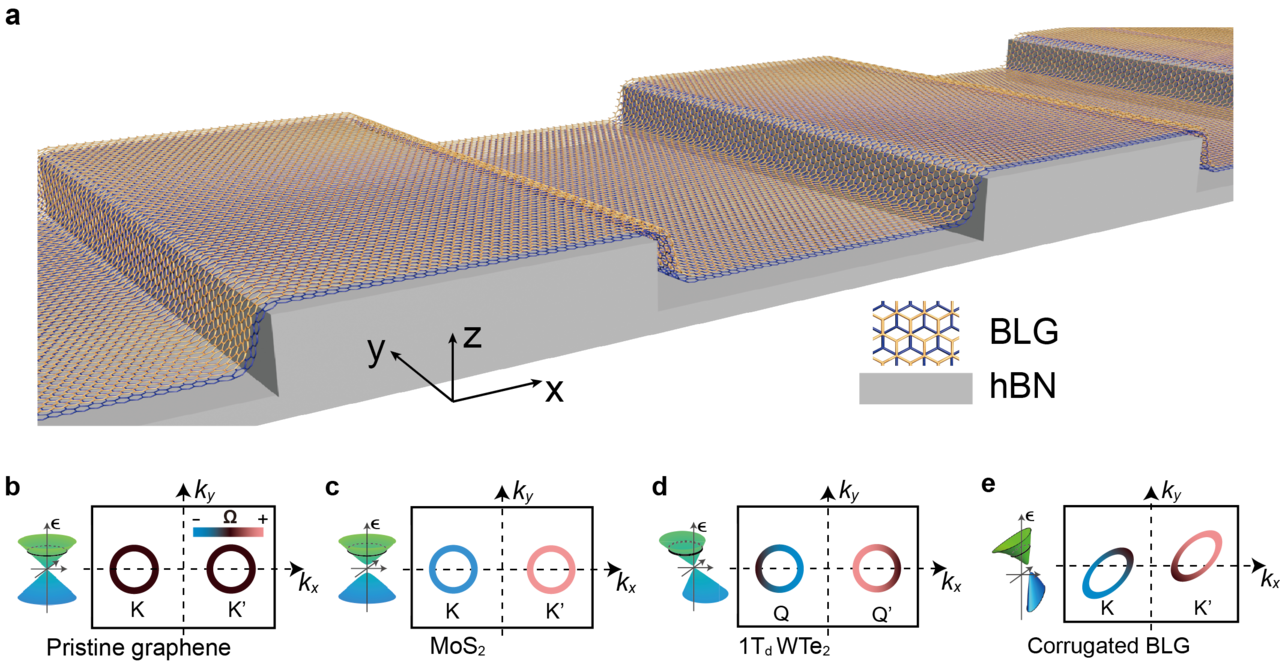 By the use of lithographically patterned strain engineering, we bring bilayer graphene into an exotic quantum state and demonstrate two Hall effects without breaking time-reversal symmetry. Now, let’s take a look back at the journey that has brought us here!