A memristor based on bio-derived protein nanowires harvested from the bacterium Geobactor sulfurreducens, works at biological voltages of 40-100 mV.
Jun Yao
Assistant Professor, University of Massachusetts, Amherst
Follow
Like Liked by Eva Amsen
0

This is another example of serendipitous research, following our previous discovery of energy harvesting from ambient humidity, by using the same interesting protein nanowires, yet in a completely different fashion. The story began with the same setting that, as a new research group, we faced the typical challenge in picking up the right topic and getting the research off the ground fast. This means, if the group had more than one graduate student, the challenge would multiply for multiple choices needed from different students. As a starting junior faculty, I am used to the comfort zone of making nanoelectronic devices from inorganic materials, which was both my PhD and postdoctoral training. The meet with my colleague microbiologist Derek Lovley changed this perspective. He showed me the protein nanowires harvested from microbe Geobacter sulfurreducens that are electronically conductive (Fig. 1a). The bacteria use them as nanoscale cables for electronic communications with the environment and other microbial species.

While one of the simplest ideas was to make a thin-film nanowire gas sensor that eventually lead to the discovery of energy harvesting from ambient humidity, another one was to use the protein nanowires as a dielectric to construct memristors. Looking back, I can list multiple reasons (as shown later) why to use protein nanowires to make memristors. But honestly speaking, we had no clue where this would lead to at the very beginning. It was merely a fun test of new material.

Now memristors, a type of electronic devices that can modulate the conductance according to external electrical inputs, naturally encode history-dependent signals for information storage and processing. Therefore, they are deemed to be the promising candidates to emulate neuronal components in our brain, which have converged memory and logic functions for high efficiency in computing. One of the main types is a metallization memristor, in which a dielectric is sandwiched between two metal electrodes. A metal filament is grown inside the dielectric matrix from one of the (active) electrodes by electrochemical processes driven by the voltage input, eventually bridging the two electrodes to form a conduction state. This conduction state can be modulated by the morphology change (e.g., formation/breakage, growth/shrinkage) in this metal filament through reversible electrochemical processes or the electrical inputs, similar to activity-dependent plasticity in neuronal components such as a synapse. However, this does not lead all the way down to the closest emulation, as biological systems use electrical signal of tens of millivolts (e.g., action potentials of 40-100 mV) for computation whereas almost all memristors use voltages of 0.2-2 V. At a certain point, we seem to be pretty satisfied that we are an order of magnitude away from the biological system.

Tianda Fu, a first-year graduate student, had a fun time replacing the conventional inorganic dielectric with the protein nanowires to make metallization memristors and test them. It worked, to his surprise, that the device showed a working voltage as low as 50 mV (Fig. 1), exactly the same level used by the biological counterparts. This surprising yet delighting result was immediately followed by the question why the protein nanowires have this enabling capability; after all, the mere protein composition cannot be the reason as previous biomaterial-based memristors never showed such effect.

Fig. 1. (a) Transmission electron microscope images of protein nanowires and schematic of the nanowire memristor device. (b) Memristive switching I-Vs.

In the subsequent quest, we found that the protein nanowires were playing the canonic role of a catalyst, which brings down the energy barrier involved in the electrochemical process for the formation and modulation of the metal filament and hence the functional voltage (Fig. 2). Collaborator microbiologist Derek Lovley knows well that these protein nanowires are specifically designed in microbes to facilitate their charge transfer to metals, an electrochemical process similar to that happening in the memristor!

Fig. 2. (a) Schematic of nanowires catalyzing Ag filament formation, which (b) brings down the reduction overpotential (∆E), and leads to (c) a decrease in the switching voltage (∆Vth).

The protein nanowire memristors, functioning strictly at the bio-voltage level (e.g., ≤ 100 mV), can be used to construct artificial neurons and synapses that have the parameter matching to biological counterparts. Since these elements are key components for neuromorphic computing architecture such as spiking neural networks (SNNs), it indicates that bio-voltage memristors may lead to ultralow-power neuromorphic computing with power consumption comparable to biological computation. Also, the parameter matching enabled by the bio-voltage memristors can lead to the possibility of direct bio-signal processing and hence direct communications between electronic and biological tissues. Such on-site signal processing is highly desirable for bio-integrated systems, enabling the ultimate vision of a seamless bioelectronic integration that is key to advanced prosthetics and human-brain interfaces.

The catalytic concept introduced in this study can lead to broad efforts and generic strategies in modulating/reducing function voltages in various memristors. This is tied up to the in-depth understanding of the molecular mechanism how the protein nanowire facilitates the electrochemical processes involved in the memristive switching. We hope that the unraveling understanding can lead to general principles in material design and device engineering for ultralow-voltage electronics and bioelectronics. 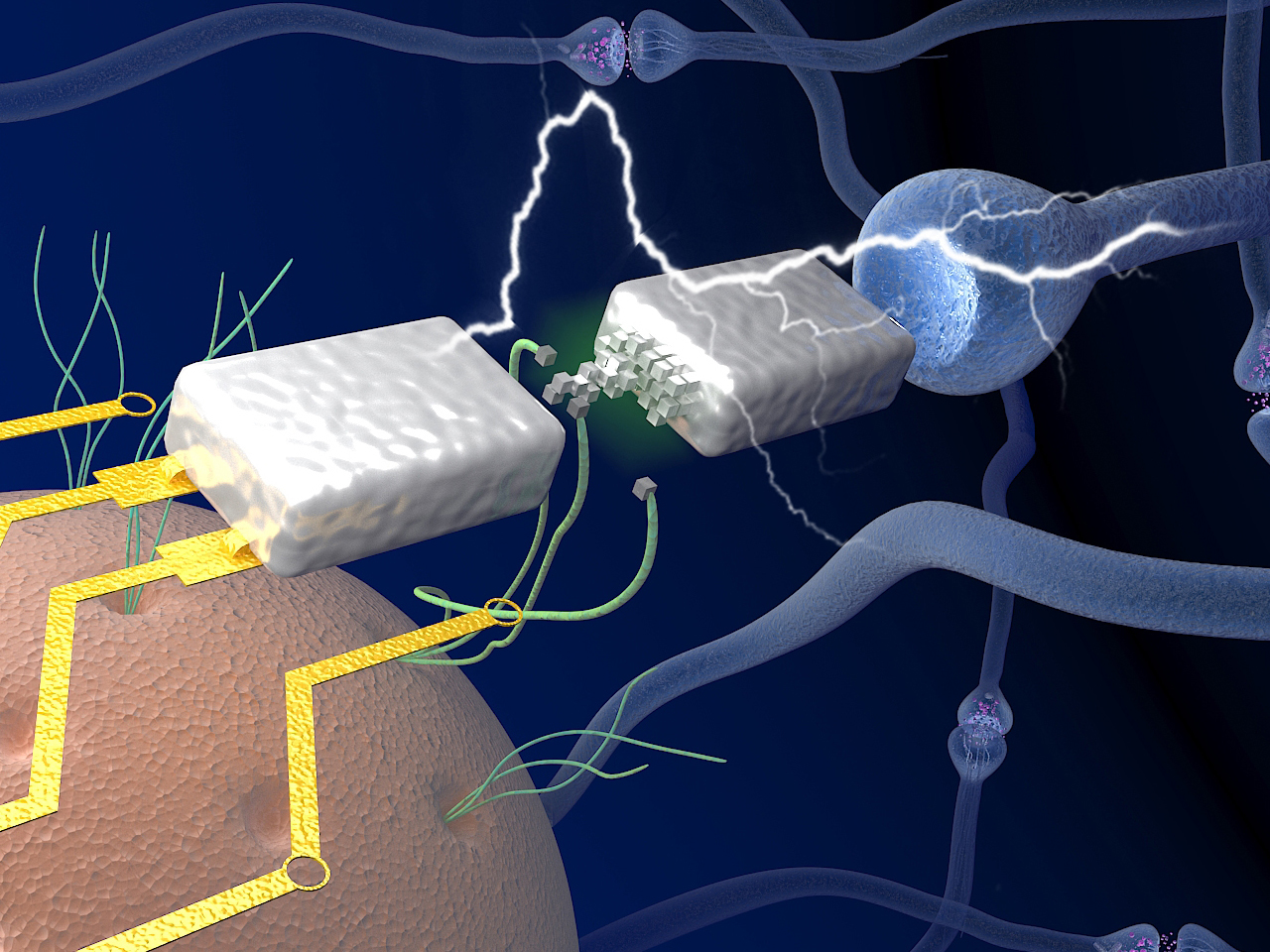 A memristor based on bio-derived protein nanowires harvested from the bacterium Geobactor sulfurreducens, works at biological voltages of 40-100 mV.