The background. The story of this study started in 2018. At a Training School within the COST action MOLIM: Molecules in Motion, which I attended as the chair of the action, I talked with one of the lecturers about our current research on water spectroscopy, also the topic of this Nature Communications paper. I complained that there are only very few ultra-high-accuracy spectroscopic measurements for water isotopologues, we mostly lack details about the hyperfine structure of the lines, and no transitions between the ortho and para nuclear-spin isomers of the main isotopologue of water, H216O, have ever been detected. I emphasized that all new observations would be highly useful to validate our line-by-line spectroscopic datasets of water isotopologues important for a large number of scientists and engineers and a large number of scientific and engineering applications. Then, this lecturer, while explaining his own research interests, noted that he has been studying the spectrum of hydrogen deuteride (HD) with an ultrasensitive experimental setup, built in the group of Prof. Ubachs in Amsterdam. The relevant point in the discussion was that during the HD measurements they simply could not avoid observing spectral lines of water coming off the walls of the apparatus. Although, he added, the annoying water signals could in principle be resolved with outstanding precision, this had not been done. The reason, he continued, was that as a group of physicists they had mostly been interested in using their beyond-the-state-of-the-art apparatus to frequency metrology and to test the standard model of particle physics. This conversation led me to contact Prof. Ubachs and ask him to study jointly the "annoying" water lines so precious for several communities. After a brief discussion, we decided to join forces, and, governed by the complementary expertise of a group of experimental physicists in Amsterdam and that of theoretical chemists in Budapest, as well as the support of a grant from Laserlab-Europe, start a collaborative effort recording rotational-vibrational water lines at LaserLaB Amsterdam with extreme precision.

SNAPS. During the experimental campaign in the spring and summer of 2019, we tried to deploy the entire toolbox of network theory and use the experimental and first-principles linelists of H216O to select which transitions to record. Line selection is an especially important aspect of precision spectroscopy, since measurements go line by line and each of them is rather expensive (detecting and fitting a single transition takes several hours), there are a number of experimental constraints when observing Doppler-free lines under saturation conditions, and to make the experiments feasible, only a very narrow range should be scanned, requiring the a priori accurate knowledge of the target transitions. Furthermore, while the lines most valuable for users of spectroscopic data are those which take place within the ground vibrational state, the observations are feasible only for highly excited vibrations in a very narrow frequency range. Thus, we came up with a powerful and intelligent design scheme what we call spectroscopic-network-assisted precision spectroscopy (SNAPS). Due to SNAPS and the painstaking efforts of the Amsterdam group, we could detect an unprecedented number (156) of H216O lines with an accuracy about one million times higher than that of typical high-resolution spectroscopic studies. These systematic and systemic observations allowed the prediction of 1219 calibration standards via the venerable Ritz combination principle way outside of the narrow experimental region accessible for our measurements. Yielding accurate line positions in a broad frequency range is indeed one of the principal advantages SNAPS offers and the set of 1219 lines form one of the important results of the present investigation.

An analogy. To bring our SNAPS approach closer to non-spectroscopists, they should imagine the rotational-vibrational quantum states of a molecule as inhabitants of a molecular skyscraper. Each vibrational state defines a floor of the building. As first-principles computations suggest, the simple and light triatomic molecule H216O has about 1500 vibrational bands, corresponding to 1500 floors of this molecular skyscrape, the H216O Tower. Each rotational state of a vibrational parent state has a flat on the given floor; altogether there are about one million apartments in this skyscraper (again, a result known from first-principles computations). Now, a goal of the development of line-by-line spectroscopic databases is to provide as much and as accurate information as possible about each of the tenants of molecular skyscrapers. This is achieved by exploring the connections, something like a "social network", of the tenants.

Suppose that to gain knowledge about the network of the tenants of H2O-16 Tower we provide a TV subscription to one of the inhabitants, let's say the one on the ground floor with apartment no. 1 and allow this tenant to connect to others (on his floor and higher up, all the way to the top of the skyscraper). This person makes connections via cables (representing spectroscopic transitions) with certain apartments. Of course, the apartment owners who are then wired are expected to distribute the cable TV to additional dwellers through additional cabling. Thus, by means of a series of cables (paths in the language of network theory), in principle all the residents of H216O Tower are enabled to watch the channels provided first to apartment no. 1. To ensure that there is a path to each apartment, we would need at least as many connections as the number of apartments minus one.

It happens, however, that certain apartments are separated by thick walls, making their direct connection intractable. The thickness of the walls (that is, the transition intensities) is governed by formulas of quantum mechanics, from which so-called selection rules can be derived. These selection rules prescribe which homes can be linked directly, explaining why the number of allowed transitions for one million apartments in H216O Tower is "only" about one billion, instead of the expected one trillion.

It is also known from quantum mechanics that the walls are extremely thick among certain collections of apartments (components in network theory), prohibiting their through-the-wall (that is, experimental) linkage. For example, the H216O Tower is a "semi-detached" skyscraper, divided into two (called ortho and para) blocks (components). By a judicious choice of a second tenant, likely on the ground-floor, who is given a TV subscription, apartments with both the para and ortho label can be connected up. Nevertheless, as shown in our paper, linking the ortho and para blocks can be achieved via clever outdoor (that is, theoretical) cabling, making the second subscription unnecessary.

Wiring the apartments can be based on (lower-quality) copper or (higher-quality) optical cables, symbolizing high- and ultrahigh-resolution experiments, respectively. While traditional highly accurate techniques, like microwave and terahertz spectroscopies, are restricted to connect apartments on the same floor, optical precision-spectroscopy experiments are characterized by cables directly connecting the ground floor with apartments on a high, say 20th floor or so. Thus, to provide ultrahigh-quality TV signals to tenants on the ground floor requires up- and downward cabling on well-defined paths. In fact, these are the paths identified and then measured via the SNAPS approach.
It is easy to appreciate that the TV signal becomes worse if the transmitting path is interrupted with even one copper wire, and that a long path of optical cables is better than a short, even a direct copper-based linkage.

Relevance. Our joint theoretical and experimental study performed on the most important molecule for spectroscopy, H216O, proves that precision spectroscopy can become a major player for spectroscopic database development and related applications. Although in the near future precision-spectroscopy experiments remain to be constrained, e.g., by the  optical setup, to narrow wavenumber and intensity ranges and continue to be expensive, if the lines targeted are carefully selected via the full exploitation of network theory and first-principles data, precision spectroscopy provides much needed information to enhance our understanding of the rotational-vibrational states of common molecules. Thus, we expect that the SNAPS approach would be widely utilized in the future, and the ball is now in the court of experimentalists. Finally, we would also like to point out that a different branch of mathematics, beyond algebra, linear algebra, and differential equations, namely discrete mathematics (graph and network theory) provides just as useful tools for physical sciences as all the other traditional mathematical techniques. As found once again, network theory is indispensable when studying complex systems, which even the smallest molecules are when their internal dynamics is considered in full detail. Appreciation of network theory appears to be particularly important for rovibronic spectroscopy, where the network-theoretical framework describing molecular motions is backed by one of the most fundamental physical rules, the Ritz combination principle.

I have liked much the human and scientific adventure behind this paper. For instance, I have learnt how ``annoying" measurements can be driven into a an exciting collaboration between experimentalists and theoreticians, and how network theory and first principles computations can be applied in highly accurate molecular spectroscopy with great success. The blog is also written with a very clear and entertaining style. In short: this is a very nice contribution and it is worthwhile to read it!. 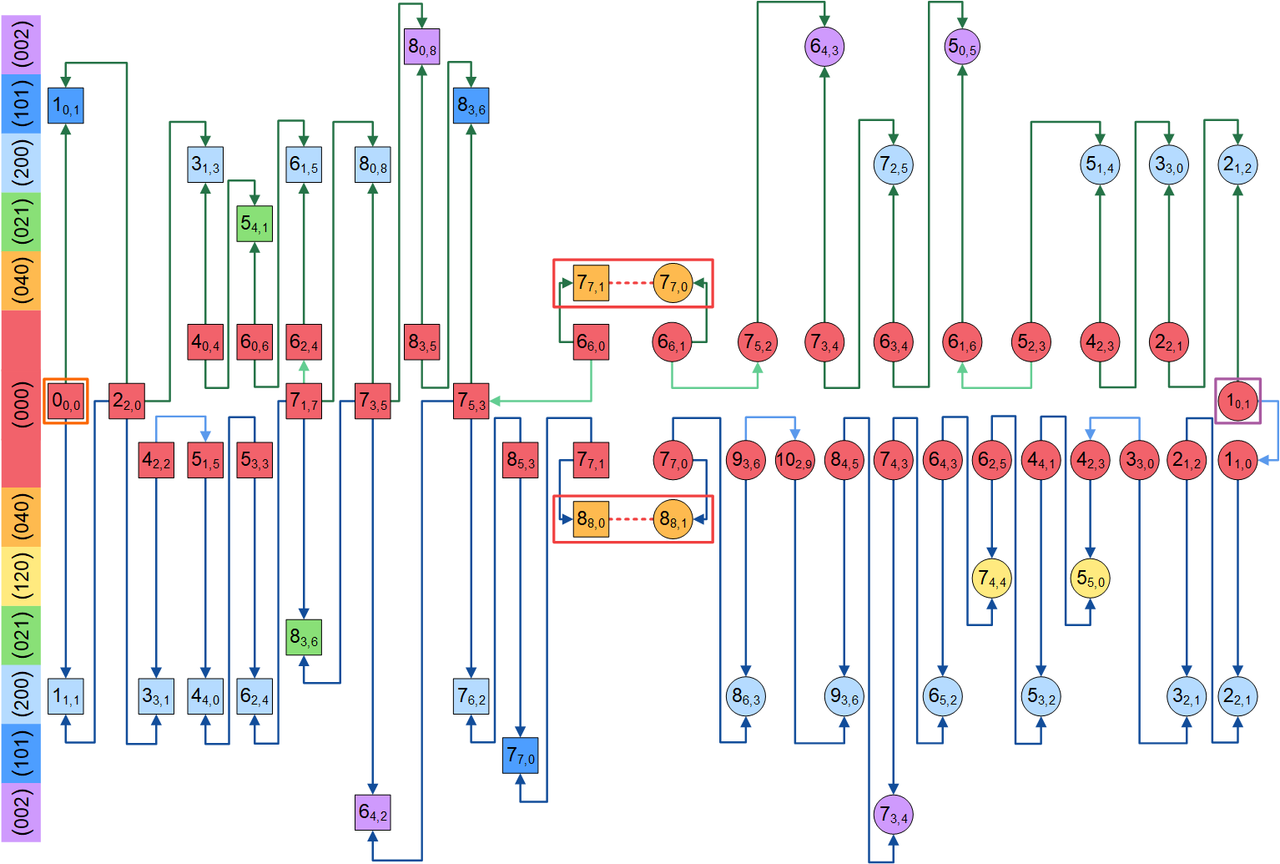