In our recent work, we show that single ytterbium ions embedded in nanophotonic cavities have long spin coherence times and can be optically read out in a single shot, demonstrating a promising new platform for building optical quantum networks.
Jonathan M. Kindem
NRC Postdoctoral Scholar, JILA/NIST
Follow
Like Liked by Ruth Milne
0

Single ytterbium ion qubits in nanophotonic cavities have long coherence times and can be optically read out in a single shot, establishing them as excellent candidates for optical quantum networks.

Over the past decade, there has been an explosion of interest in developing technologies that take advantage of fundamentally quantum mechanical properties like superposition and entanglement. Crucial to this goal is the ability to both control and read out individual quantum systems and engineer interactions between them. While building large-scale quantum systems remains extremely challenging, a complementary approach toward quantum-enhanced technologies is to connect small-scale quantum devices through optical links. These “quantum networks” depend on interfaces that enable light to interact with quantum bits (qubits), for instance atoms, ions, or similar emitters in the solid-state.

In the Faraon group at Caltech, we are focused on developing quantum interfaces using rare-earth ions in crystals. Rare-earth ions have exceptionally long coherence times at cryogenic temperatures, which makes them a promising building block for quantum technologies. Unfortunately, rare-earth ions do not efficiently interact with light, which has made it challenging to harness their potential at the single ion level.

We address this challenge by interfacing the rare-earth ions with nanophotonic cavities. These cavities fundamentally modify the electromagnetic environment of the ions to enhance their interaction with light. Crucially, these cavities effectively make the ions emit light more often and into a path where we can more easily detect this light, which makes it possible for us to initialize, control, and measure single ions.

In our most recent work, we use the 171 isotope of ytterbium in a YVO4 host crystal. Other researchers have used this isotope previously, for example, in atomic clocks, because of its simple energy structure and stable transitions, but no one had explored whether these favorable properties would be preserved when the Yb was trapped in a YVO4 crystal. Our previous work with large ensembles of Yb-ions showed that Yb in YVO4 had the potential to be optically and magnetically stable, which is essential for storing quantum information for long times, while also being very bright relative to other rare-earth ions.

Excited by the properties of this material, we incorporated these ions into our nanophotonic platform with the goal of controlling and measuring only a single ion. The major experimental challenge was making the ions bright enough to detect. Our current nanophotonic cavities effectively allow us to extract light from the ion 100 times faster than normal. By combining this improved brightness with a lot of work to minimize any losses or added noise in our system, we showed we can initialize and read out the state of the single ion qubit with less than 5% error. We control the Yb qubit and probe its quantum storage time using a microwave waveguide fabricated next to the cavity. Using common qubit control techniques consisting of combinations of microwave pulses, we isolated the Yb qubit from its noisy environment and showed information storage times of more than 30 ms. Furthermore, we saw that all of these nice properties are maintained up to temperatures of about 1 K (a temperature that would render most solid-state qubits ineffective), which will enable the use of simpler cryostats for these experiments in the future.

This work represents a milestone for quantum technologies based on single rare-earth ions and demonstrates the promise for this platform. Our future work will focus on further extending the quantum storage times of the ions and upgrading the nanophotonic devices. These upgrades will lead to better initialization and readout and improve the quantum properties of the light we extract from the ion. We also expect to be able to use existing networking protocols and higher purity crystals to address the remaining optical instability of the ions. Building on these improvements, we expect to optically link two or more single rare-earth ions on the path toward small-scale quantum networks.

For more details, please see our paper “Control and single-shot readout of an ion embedded in a nanophotonic cavity” in Nature.

Poster image shows an artist's rendering of the crystal structure of Yb in YVO next to a nanophotonic cavity (Ella Maru Studio/Faraon Lab) . 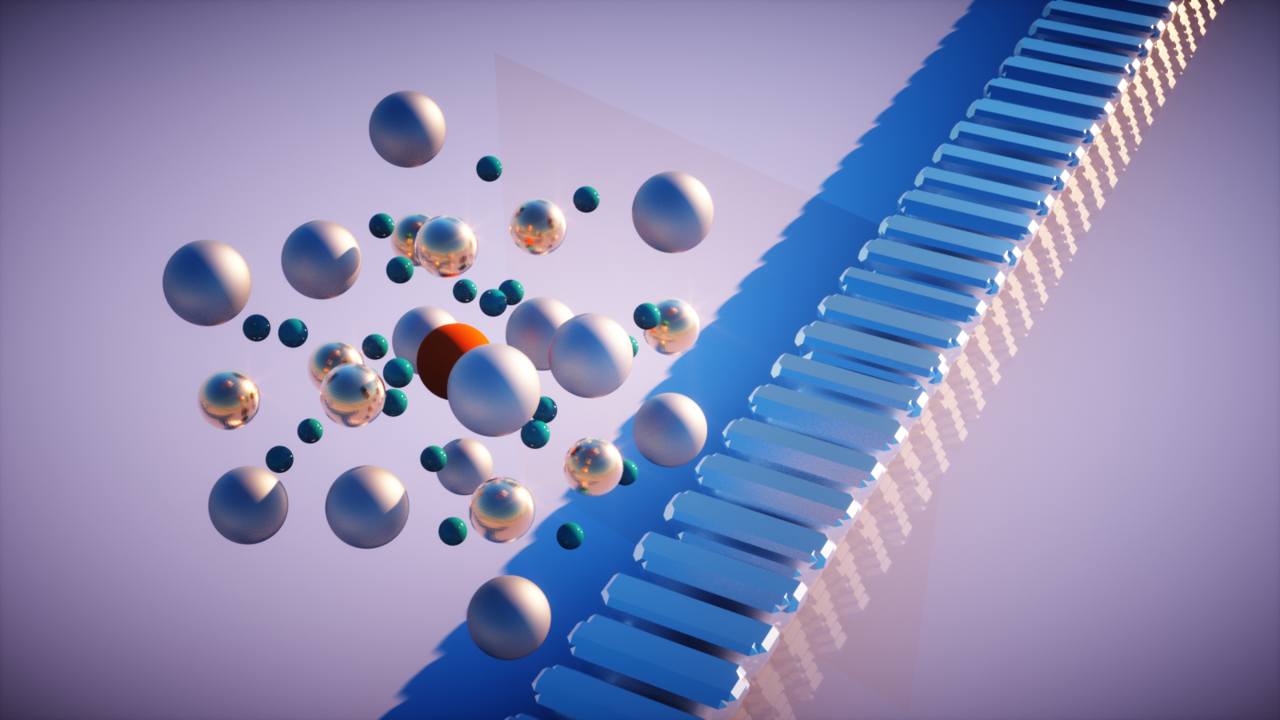 In our recent work, we show that single ytterbium ions embedded in nanophotonic cavities have long spin coherence times and can be optically read out in a single shot, demonstrating a promising new platform for building optical quantum networks.