Photovoltaic response from normal ferroelectric materials generates large voltages but low current due to poor absorption of visible light. Noguchi et al. dope ferrous and ferric ion couple into barium titanate crystals to enhance the photogeneration at photon energies both below and above bandgap.

Steady-state photocurrents under illumination were reported in the 1950s for barium titanate (BaTiO3). In 2012, Prof. Rappe demonstrated that the ferroelectric PV effect originates from spatial inversion symmetry breaking. Because large photovoltages arise from intense spontaneous polarization (Ps), wide-bandgap oxides such as LiNbO3 and BiFeO3 were the primary materials in this field.

Similar to titanium dioxide, a typical photocatalyst, the oxide ferroelectrics suffered from the band-gap problem, namely, photons with energies greater than the bandgap (Eg) can generate electron-hole pairs that deliver the robust PV effect. Our group reported the gap-state engineering1 that mid-gap states act as a scaffold for visible-light activation of the PV response in BiFeO3. However, this materials design was still restricted by the materials Eg, i.e., the photon energies greater than the half of Eg was required for generating electron-hole pairs.

The motivation of our study was quite simple; how transition metal cations that can have multiple valence states influence the PV effects. We chose iron doped barium titanate (Fe-BaTiO3), where the valence state of iron, Fe3+ and Fe2+, was reported to be controlled by a high-temperature annealing. At first, we anticipated that a higher concentration of Fe2+ that creates a donor state induce larger photocurrents. The experimental results were qualitatively consistent with this expectation, but the reduced sample exhibited extraordinary large photocurrents. This result cannot be explained solely by the role of Fe2+. The subsequent experimental and theoretical investigations2 revealed that the coexisting of Fe3+ and Fe2+ provided the robust PV effect. As shown in Fig. 1, the Fe2+-Fe3+ coexisting state, namely the polar lattice with the Fe2+ and Fe3+ domains having the donor and acceptor states, respectively, undergoes electron and hole injections under light illumination. Visible light with energies much smaller than Eg can, in principle, induces electron-hole pair generation, which is accompanied by the redox reactions of iron both in the domains.

The most characteristic feature is that the ‘successive-redox’ mediated PV effect is not restricted by the materials Eg. It is expected that the materials design utilizing the successive-redox reactions of transition metal cations can activate other photoinduced functions under visible light such as photocatalytic effects. 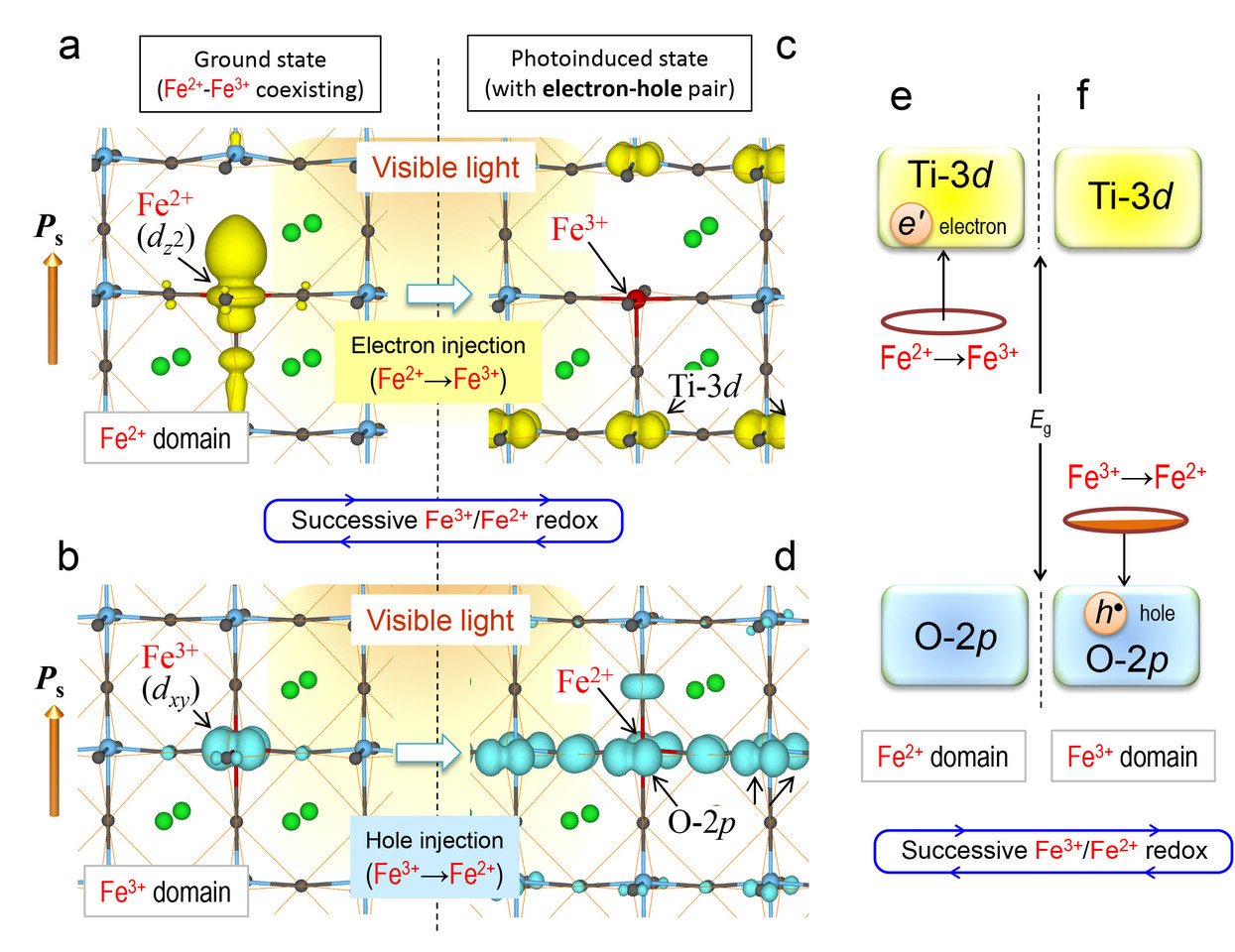