Van der Waals (vdW) heterostructures are a unique class of artificial solids that offer the novel possibility to manipulate their physical properties via controlling the order and composition of the constituent layers. Additionally, adjusting the relative rotation of the atomic planes (twist) in these structures offers a route to precisely control the electronic and optical properties of vdW heterostructure materials.

The moiré superlattices generated by the stacking of 2D material layers with either mismatching lattice constants or relative twist angles (θ ) have generated significant breakthroughs, such as the observation of the Hofstadter butterfly effect in graphene on hexagonal boron nitride (hBN) [1,2]. More recently, low-twist angle bilayer (BL) graphene devices have exhibited a range of exotic behaviours such as superconductivity [3]. For very low twist angles (θ < 1°) BL graphene undergoes an atomic reconstruction in to a pattern of Bernal-stacked domains, separated by a network of stacking faults. Despite recent scientific interest in studying similar systems comprised of transition metal dichalcogenides (TMDCs) there have been, until now, no published reports of lattice reconstructions observed for twisted TMDC BLs.

In our latest Nature Nanotechnology paper we study twisted BLs of MoS2 and WS2 homo- and hetero-bilayers using a combination of atomic-resolution scanning transmission electron microscopy (STEM) and conductive atomic force microscopy (cAFM). We report the first observation of such reconstructions and corroborate our experimental observations using a combination of density functional theory (DFT) and multiscale modelling [4].

In our study, we produce these twisted BL TMDCs using the 'tear and stack' technique [5] to generate either parallel (P, θ ~0°) or anti-parallel (AP, θ ~180°) TMDC BLs on custom-fabricated TEM grids for atomic-resolution STEM analysis or few-layer graphene (FLG) on Pt/SiO2 substrates for cAFM measurements. Our atomic-resolution STEM results are shown below in Fig. 1. in which atomic reconstruction patterns are readily observed for both P and AP homo- and hetero-BL samples over a wide area.

For P-BL samples (Fig. 1a-c), the lattice adopts a triangular arrangement of commensurate regions of either MX' or XM' stacking in which the metal atom in the top layer (M) is aligned with the chalcogen atom (X) in the layer below  and vice versa for the XM' arrangement. This arrangement corresponds to 3R stacking which is rarely found in bulk TMDC crystals. At the convergence of domain boundaries between the 3R domains the lattice adopts an XX' stacking configuration with chalcogens aligned in the top and bottom layers. In the case of AP stacking (Fig. 1d-f), the BL is observed to reconstruct in to large areas of 2H stacking which dominate over a commensurate MM' phase (aligned metal atoms) and small regions of XX' stacking at the domain boundaries.

To understand the formation of domains in these BL systems, we computed the interlayer binding energy for various stacking configurations. For both P and AP arrangements, the XX' has the highest energy. For P-BLs, both the XM' and MX' are the most energetically favourable. However, for AP-BLs the 2H arrangement has the lowest energy with the MM' being less favourable and explains the large disparity in the domains sizes observed in the STEM images.

We expect that these lattice reconstructions will change the electronic structure of the BL when compared to a simple, rigidly rotated crystalline lattices. In particular the properties of these BLs will be dominated by the intrinsic properties of either 3R or 2H domains for P- and AP- BLs, respectively. For 2H stacking, the inversion symmetry makes the electron wavefunction density equal on both layers. However, for 3R stacking, the lack of inversion and mirror symmetry allows the wavefunction density between the top and bottom layers to be different, as shown by our calculations in Fig. 2a.

Figure 2. a) Calculated DFT bands of 3R BL MoS2. The schematic shows contributions to orbital decomposition from the Mo and S atoms, values in parentheses are for WS2. (inset) experimental ratio of currents for XM' and MX' stacking as a function of applied bias. b) Calculated distribution of piezoelectric charge in a twisted AP-MoS2 BL. Figure adapted from [4].

In order to probe the electronic properties of these heterostructures, we performed cAFM measurements of TMDC BLs mounted on few-layer graphene surfaces. Figure 3 shows our experimental cAFM data for both P (Fig. 3a,b) and AP (Fig. 3c,d) homo-BLs. cAFM imaging further confirms our STEM results and shows a highly regular triangular reconstruction for P-BLs (Fig. 3a,b) with alternating 3R regions of high and low tunnel current corresponding to XM' and MX' stacking. The XM' regions demonstrate significantly higher (up to ~2x) tunnel current than the MX' regions which persists over our studied tip bias range with an average IXM'/IMX' ~1.6, in good agreement with our DFT modelling (IXM'/IMX' ~1.5-1.8).

For AP-BLs (Fig. 3c,d) there is no observed layer polarisation as expected, however, under higher magnification the domain structure can be resolved with the domain boundaries and the XX' and MM' regions exhibiting increased conductivity consistent with our modelling. The MM' regions are expected to carry the highest piezoelectric charge and can be considered as periodic arrays of quantum dots for electrons. Furthermore, these regions are hotspots for pseudo-magnetic fields which we expect to have magnitudes of up to 30 T which makes the MM' regions analogous to semiconductor quantum dots in a strong magnetic field.

In conclusion, compared to twisted BL graphene, twisted TMDC BLs have the potential to offer a broad range of nano-electric and optical properties. Large domains of 3R stacking in P-BLs, which is rarely found in bulk TMDC materials, can be used for electrical tuning of optical properties. Likewise, AP-BL TMDC structures have the potential to create twist-controlled networks of quantum dots and nanowires with intriguing electronic and optoelectronic properties. 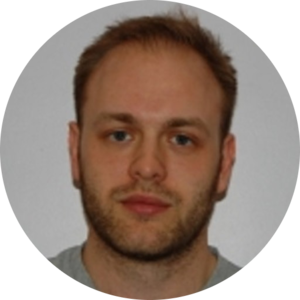