Splitting and recombination of bright-solitary-matter waves

Bright solitary waves are wavepackets that propagate without dispersion and have been under intense investigation in a variety of settings, including Bose–Einstein condensates (BEC), with a view of realizing a matter-wave interferometer. The authors present experimental and theoretical results on a…

The most sensitive measurements to date are made using interferometers, typically using highly coherent laser light. Large interferometers such as LIGO have been used to detect gravitational waves, while much smaller devices made up of kilometer-long spools of optical fiber are routinely used for important navigational applications. The experimental realisation of Bose-Einstein condensation (BEC) twenty-five years ago opened a new door in the world of precision sensing; the wave nature of BECs can be utilised in atom interferometry, where matter-waves are interfered instead of light.

Because atoms have mass, atom interferometers are many orders of magnitude more sensitive to external forces than their optical counterparts. However, the challenges in utilising cold atoms are great. Firstly, there are no truly continuous sources of ultracold atoms currently available as there are for light, so atom interferometers must utilise small samples of atoms that are lost once they pass through the interferometer. Secondly, ultracold atoms are gases, meaning they must be magnetically and/or optically confined and cannot simply propagate in free space like light. Thirdly, straightforward glass beam-splitters cannot be used, so researchers have come up with many creative ways to coherently split and recombine atomic wavepackets.

In our work, we overcome some of the major challenges in atom interferometry by using long-lived bright-solitary-matter waves, or solitons. Unlike ordinary repulsively-interacting BECs, solitons have the property that they maintain their shape over long propagation distances and times, which is ideal for interferometry. In addition to solitons, our interferometer is comprised of an optical waveguide to create the interferometer arms and a gaussian barrier that forms the beam-splitter. The gaussian barrier is created using a tightly-focussed laser beam that repels atoms.

Our setup brings to life, for the first time, a scheme much-discussed in literature. The gist of the scheme is that a soliton propagates along the waveguide until it encounters the barrier, at which the soliton is split into two, with one component reflected by the barrier and one component transmitted to the other side. Due to the curvature of the potential, the daughter solitons oscillate in the waveguide, returning to the barrier after half a period, where they recombine once again (see Figure 1). Any accumulated phase difference between the two daughter solitons manifests as a population difference after recombination. This scheme can readily be extended to a variety of arbitrary geometries. For example, a ring-shaped geometry can realise a Sagnac interferometer, which is used to measure rotation.

Figure 1 [a] The initial soliton (blue) propagates in a waveguide and is split into two daughter solitons by the barrier (green). The daughter solitons oscillate in the waveguide and return to the barrier, where they interfere, with resultant population fractions on the left and right determined by their phase difference (ϕ). [b] A series of images showing soliton splitting and recombination from the experiment, with solitons in blue and the barrier position indicated in green.

We investigated two regimes: one in which the barrier is wider than the soliton, and one in which their widths are comparable. In the wide barrier case, we show that the barrier acts like a velocity filter, which simply splits the momentum distribution of the original soliton into two, resulting in one faster soliton (the fraction with enough kinetic energy to roll over the top of the barrier) and one slower soliton (the fraction that is reflected from the barrier). This effect is strong enough to spoil any interferometry attempts. In the narrow barrier case, we show that interference dominates over velocity filtering. Most prominently, this can be seen from the position of the recombined soliton: in the wide barrier case, the soliton always appears on the left, while for the narrow barrier, a large fraction of the atoms can appear on the right, overcoming velocity filtering effects. Figure 2 below shows a theoretical trajectory of the splitting and recombination for the narrow barrier case.

Despite the success of the experiment, we saw much variation in the outcome after recombination for the narrow barrier case. After extensive 1D and 3D modelling, we discovered an oscillatory dependence of the recombination outcome on the position of the barrier, with a period of less than two microns. Due to technical limitations in our setup, a microscopic jitter in the barrier position causes enormous uncertainty in the experimental outcome. Future soliton experiments will make use of all-optical potentials from a single laser beam. Such potentials provide excellent common-mode noise rejection and are therefore inherently much more stable than our current implementation. A stable trapping and splitting potential, combined with long-lifetime solitons, therefore offers a promising avenue for soliton-based atom interferometers with highly configurable geometries.

Our full paper has been published in Communications Physics. 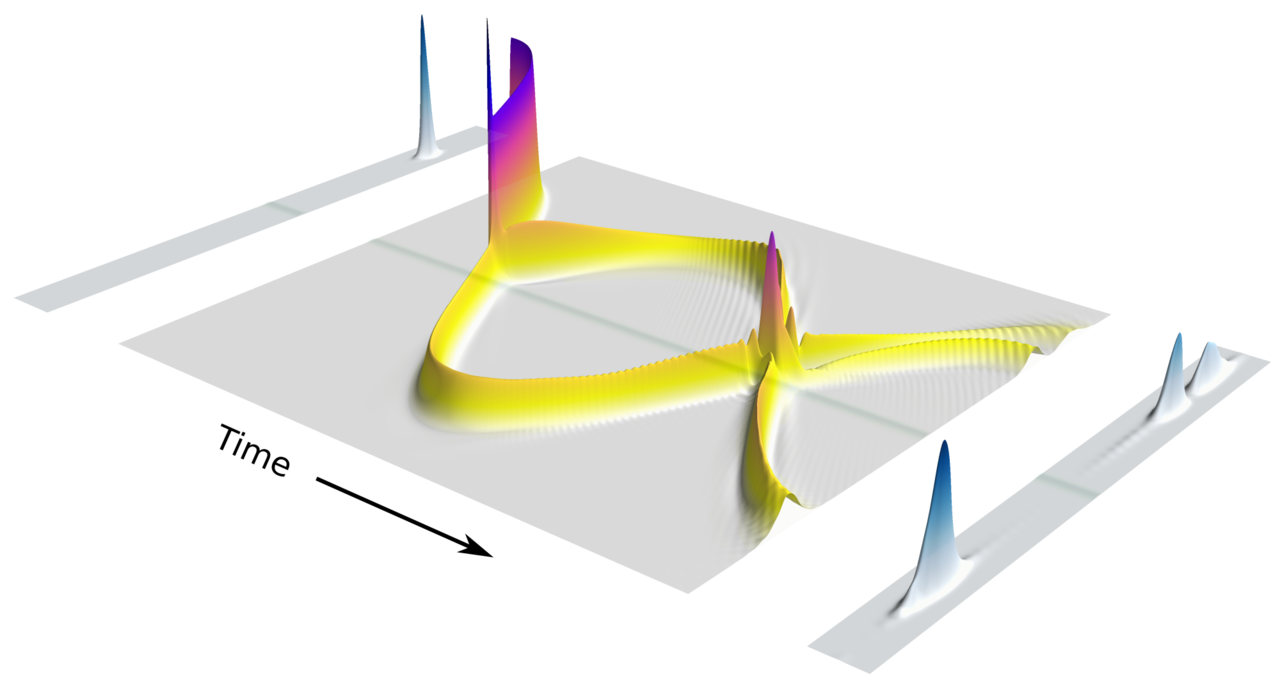 Splitting and recombination of bright-solitary-matter waves