The electrical current-induced creation, motion, detection and deletion of skyrmions in ferrimagnetic multilayers can be used to mimic the behaviour of biological synapses, providing devices that could be used for neuromorphic computing tasks such as pattern recognition.

Magnetic skyrmions are topological spin nanostructures with appealing physical characteristics including nano-meter size, inherent stability, and efficient current-induced manipulations, which incurred large interest across diverse scientific and technological community for skyrmion-based future electronic devices, where each skyrmion is employed as individual “bit”. As such, mainstream of device research has focused to replace conventional “bit”-based devices, e.g. memory and logic.

However, particle-like behavior of skyrmions, along with other fascinating characteristics, also allows skyrmion-device to be an excellent candidate for neuromorphic computing by realizing artificial synapses. For example, as multiple skyrmions can be easily accumulated or decumulated by electrical manipulations, which gives rise to corresponding resistance changes, synaptic weights in skyrmion-based synapses can thus be controlled electrically in a efficient way at low voltages. In this work published in Nature Electronics, we experimentally present such skyrmion-based artificial synaptic device designed for bio-inspired neuromorphic computing and thus artificial neural network (ANN).

To highlight the potential of this approach, we then used both device-level and system-level simulations on the neuromorphic task of skyrmion synapse-based artificial neural network: pattern recognition using MNIST handwritten dataset. In a device-level simulation where experimentally acquired characteristics of skyrmion synapses are implemented, we achieve the pattern recognition accuracy of 89%, which is comparable to the software-based ideal training accuracy of 93 %. System-level simulation then reveals that skyrmion synapse-based neuromorphic computing could have some advantages on important metrics including linearity, device-to-device variability, endurance and retention, compared with other established technologies (e.g. PCRAM/RRAM-based synaseps), Together, we believe our experimental demonstration highlights the potential of using topological magnetic textures for multi-level, synapse-based neuromorphic computing devices for future advanced AI systems. 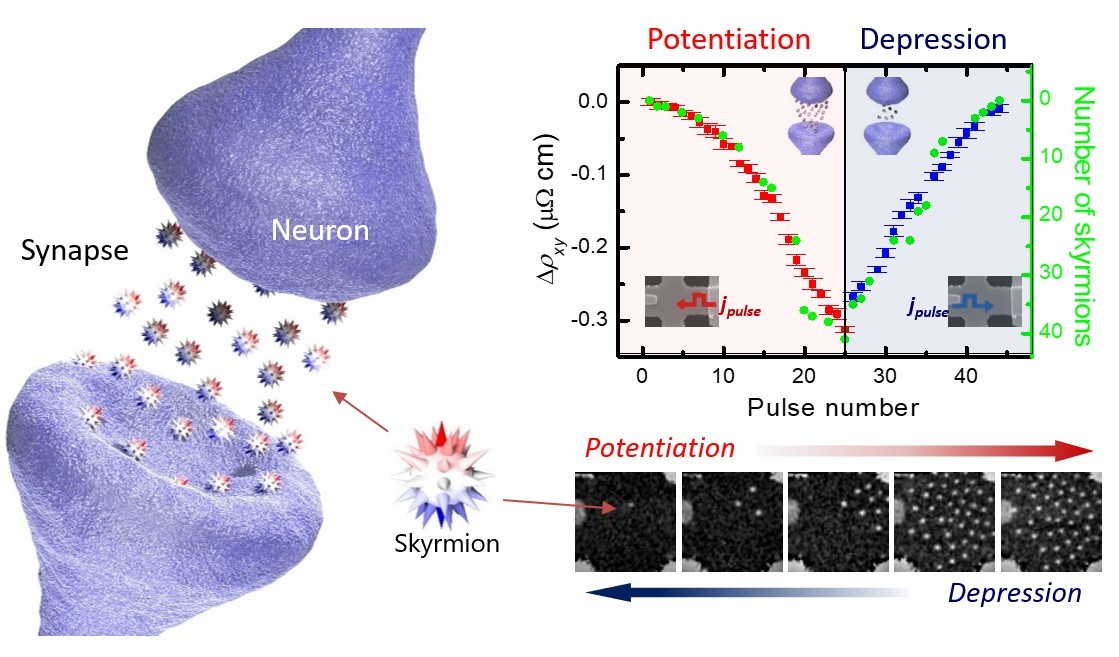