A new type of energy-harvesting device, based on protein nanowires from the microbe Geobacter sulforreducens, can generate a sustained power output by producing a moisture gradient across the nanowire film using natural humidity.
Jun Yao
Assistant Professor, University of Massachusetts, Amherst
Follow
Like Liked by Ruth Milne and 4 others
1

Research discovery can be serendipitous. As a young research group, we faced the typical challenge of how to pick up the right topics and get the research off the ground fast. The safe way usually is to pick up what one used to doing—to me, nanoelectronic devices made from inorganic nanowires were the focus when I was a postdoctoral fellow. I did not heed the possibility of making electronics out of some nonconventional nanowire materials. This perspective was quickly changed when I met with my colleague microbiologist Derek Lovley, who showed me images of protein nanowires harvested from microbe Geobacter sulfurreducens (Fig. 1a, top panel) that are electronically conductive as the bacterium use them as nanoscale cables for interspecies charge transfer.

Fascinated with the new nanowire material, our initial hope was to make some proof-of-concept devices that indeed could work like conventional electronic devices. The simplest idea was to place a pair of electrodes across a thin film made from the protein nanowires and measure the conduction (Fig. 1a, bottom panel). Similar to inorganic nanowires, we knew that the nanoscale structure in the protein nanowires (e.g., 2-3 nm of diameter) could provide them a high surface area for sensor applications. A quick start is a gas (e.g., humidity) sensor that can serve as an important metric to health and environments.

Xiaomeng Liu, a first-year graduate student, performed this preliminary test. It worked, in fact, better than that. Accidentally, he found that he could get an electrical current signal from the nanowire device without the supply of an external voltage bias. This initial serendipity led to highly reproducible and stable electric output in the ambient environment by employing a vertical configuration in the nanowire devices. Step by step, we nailed down that ambient humidity was the energy source.

In a way, human being have a long history in utilizing water to produce electricity – the best known one is the hydroelectric power. Another one, streaming current, in which the transporting water molecules carry along net charges at the liquid-solid interface to produce current flow, was discovered more than a century ago. And it was recently employed in nanomaterials which contain a high density of micro/nanofluidic channels for water transport for electric power output. However, such power generation requires an external moisture gradient to drive the water transport.  So previous generators based on this mechanism or similar ones could only work at water-source locations that have this moisture gradient, which is difficult to scale up.

The beauty of the protein-nanowire generator, owing to the unique chemical and structural properties of the protein nanowires, is that the device spontaneously builds up a vertical moisture gradient in the ambient environment,  which subsequently generates a sustained electric field or voltage output (e.g., 0.5 V across a thickness of 7 µm, Fig. 1b) due to moisture-gradient-driven charge diffusion. This means that the device can be deployed literally anywhere in the ambient environment for continuous energy harvesting.

The potential of this discovery can be big as environmental energy harvesting offers the promise of clean energy for self-sustained systems. Known technologies—such as solar cells, thermoelectric devices and mechanical generators—all have specific environmental requirements that restrict where they can be deployed and limit their potential for continuous energy production. In contrast, atmospheric humidity—which can be viewed as a secondary form of solar energy—is 24/7 continuous and ubiquitous. Even the Sahara Desert has an average relative humidity ~25%. The atmosphere contains water amount equivalent to 10% of total volume of fresh-water lakes in the world. Ambient humidity is also diffusive, which means that we can stack multilayered devices to increase the areal power density, possibly outperforming known technology such as solar cells that are intrinsically planar confined. These factors indicate that the potential of scaling up this technology can be big, which is expected to not only provide continuous energy to consumer/wearable electronics, but also potentially address energy-related global issues such as providing a cheaper and easier means of electricity production in remote regions and poor countries. 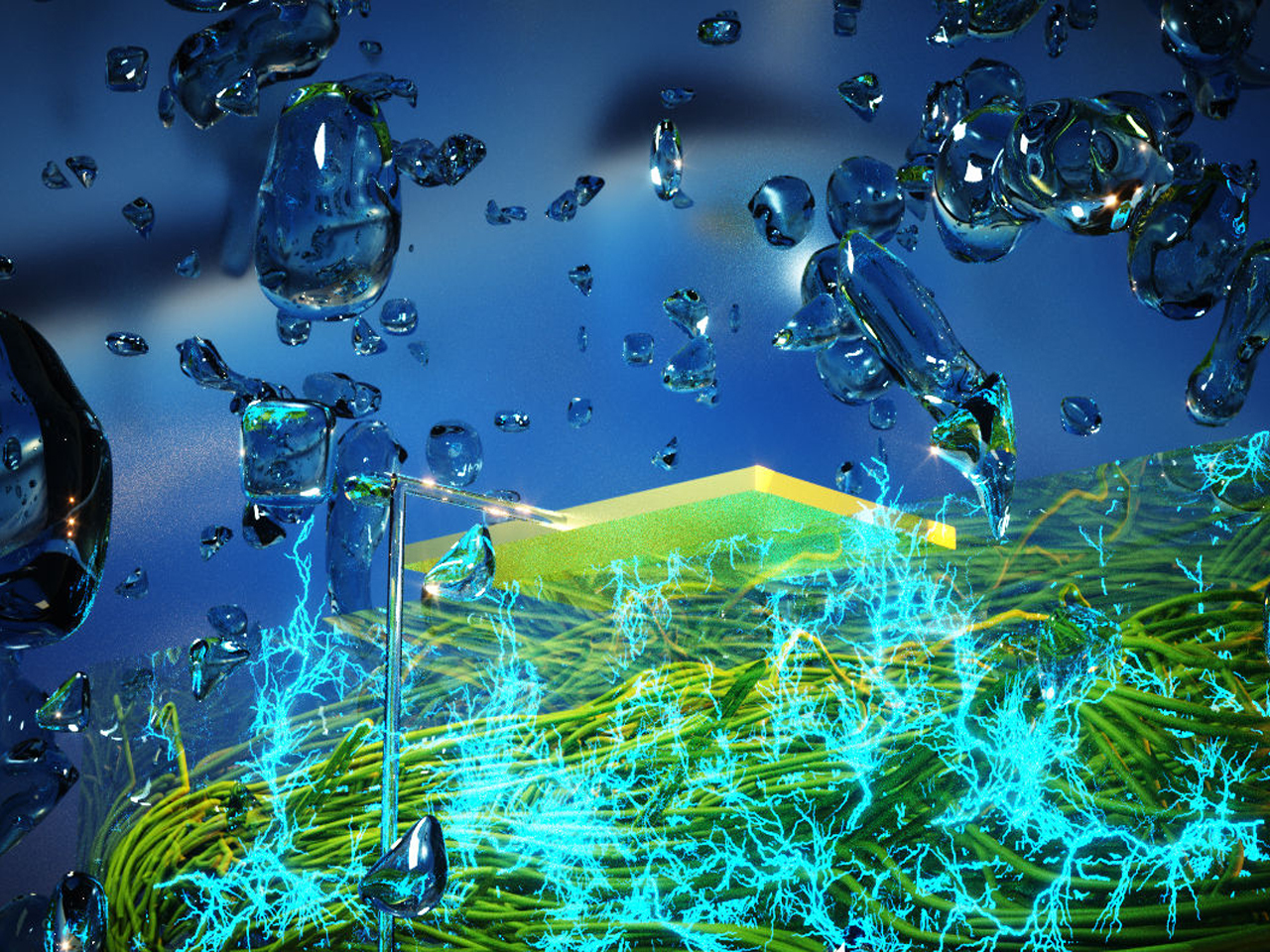