A community from Nature Research
Contributor Scientific Reports
Behind the Paper, News and Opinion

A new source of natural nanomaterial in Pakistan for industrial applications

The many uses and benefits of clays have been recognised and exploited for millennia in many cultures around the world. As well as being commonly used in construction and pottery production, they are also widely used utilized in pharmaceutical, cosmetic, engineering and healthcare applications. Montmorillonite is a clay whose properties render it suitable for multiple applications including as an active ingredient in pharmaceuticals, an ingredient in skin care products, and as a material for water treatment by adsorbing toxic heavy metals and unwanted anions.

In our work published in Nature Scientific Reports, our research group explored a new source of montmorillonite in the Koh-e-Suleiman mountain range located in South Punjab, Pakistan. A purification protocol was needed to remove any undesirable substances from the clay such as lead, arsenic and crystalline silica, which could impede industrial potential and have adverse health effects. The area of South Punjab has a large dependence on agriculture and relatively low levels of industrialisation and consequently currently faces higher levels of poverty and unemployment compared with the rest of the province. An abundant supply of this largely untouched raw clay could help with economic conditions in the region so, in addition to physicochemical characterisation, this study investigated the practicality and economic feasibility of its extraction and purification for large-scale industrial applications by comparing the properties of the small-scale extracted clay to the large-scale extracted clay, and by conducting a techno-economic analysis.

(a) Geological map of Pakistan and (b) site for raw clay sample collection.

The amount of montmorillonite present in the raw clay was ranged from 22 - 25%. This was somewhat lower than reports for other clay sources, thus the extraction and purification needed to be effective and efficient. Optimisation of grinding processes resulted in yields of >90% montmorillonite from raw samples. None of the characteristic attributes of the clays (elemental analysis, montmorillonite content and yield, particle size, nitrogen adsorption parameters and zeta potential charging) were significantly affected by the change in scale of the extraction and purification processes (from 5 g to 750 g) and were considered appropriate for pharmaceutical, biomedical, healthcare and environmental applications. Furthermore, techno-economic analysis revealed the economic benefits of extracting the clay on a large-scale with a cost of 0.01 £/g and 1.9 PKR/g compared with 0.23 £/g and 44.7 PKR/g at small-scale.

Overall, this work successfully identified and extracted montmorillonite from a new source located in the Koh-e-Suleiman mountain range of Pakistan and presents an optimised extraction and purification protocol. We anticipate that the findings in this study will improve the economic condition of the region by providing employment opportunities to locals and a valuable resource for exportation.

6 University College of Pharmacy, the University of Punjab, Lahore, Pakistan 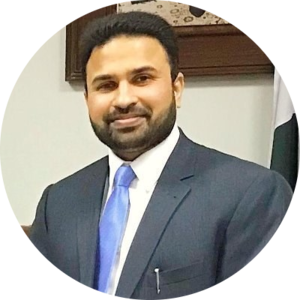 My research focused on the design, development and characterisation of new materials, instruments and technologies coupling with pharmaceutical manufacturing methods using digital processing and imaging to improve the design and fabrication of medicines and devices.
Follow