We experimentally demonstrate that a pure spin current can be pumped out from a resonantly excited antiferromagnetic insulator by sub-THz radiation and be detected using heavy metals with strong spin-orbit coupling.
Junxue Li
Postdoc, University of California, Riverside
Follow

Pure spin currents are simultaneously generated and detected electrically through sub-terahertz magnons in the antiferromagnetic insulator Cr2O3, demonstrating the potential of magnon excitations in antiferromagnets for high-frequency spintronic devices.

Recently, antiferromagnetic (AFM) spintronics has attracted tremendous attention owing to the terahertz (THz) spin dynamics and absence of net magnetization in AFM materials, which offers unique advantages for ultrafast and robust spin-based nanoscale device applications. The two eigen states of a uniaxial AFM are left- and right-handed spin precession or magnon modes which carry the angular momenta of ±ħ. If one can selectively drive only one of the magnon modes into resonance, a flow of net angular momentum is pumped out of the AFM connected to a heavy metal. This process is very similar to the spin pumping phenomenon in ferromagnet/heavy metal heterostructures but happens at a sub-THz or THz frequency. The AFM spin pumping was anticipated; however, to date, it had not been explicitly demonstrated.

The first difficulty is to find a sub-THz or THz source. We utilized the 0.240 THz solid state continuous microwave source with our collaborators in the Institute of Terahertz Science and Technology (ITST) at the University of California-Santa Barbara (UCSB). The second challenge is to choose a proper AFM among hundreds of AFM materials. There are a few criteria for the AFM candidates: (1) its magnon gap need to be as close as 0.240 THz, so that we can easily tune the magnon frequency to the microwave frequency by Zeeman splitting and drive one of the magnon modes into resonance; (2) it should be an insulator so that we can exclude the large microwave rectification effect from the AFM material itself; (3) it is better to start with a simpler AFM. Uniaxial AFMs have two well-defined eigenmodes. We choose Cr2O­3, which meets all three requirements: it is a uniaxial AFM insulator with magnon gap at 0.168 THz.

We deposit 5 nm-thick Pt and Ta (b-phase) films on Cr2O3 surface, which are used as spin current sinks and detectors. In our experiments, the Cr2O3 (10-10) slab is mounted on a piece of sapphire secured to a Teflon stage located at the exit of the waveguide, which is located at the center of a 12.5 T superconducting magnet. A magnetic field along the Néel vector is used to tune the magnon frequency to match 0.240 THz and excite AFM resonance. Very clear electrical signals are observed exactly at the resonance fields determined by electron magnetic resonance signal. The pure spin current nature of the electrically detected signals is unambiguously confirmed by the reversal of voltage polarity under two circumstances: one when switching the detector metal from Pt to Ta which reverses the sign of the spin Hall angle, and the other when flipping the magnetic field direction which reverses the magnon chirality. The intriguing temperature dependence of the electrical signals at both resonances suggests that the spin current contains both coherent and incoherent magnon contributions. Our experimental findings set the stage for further exploring spin currents in the emerging frontier of AFM spintronics. 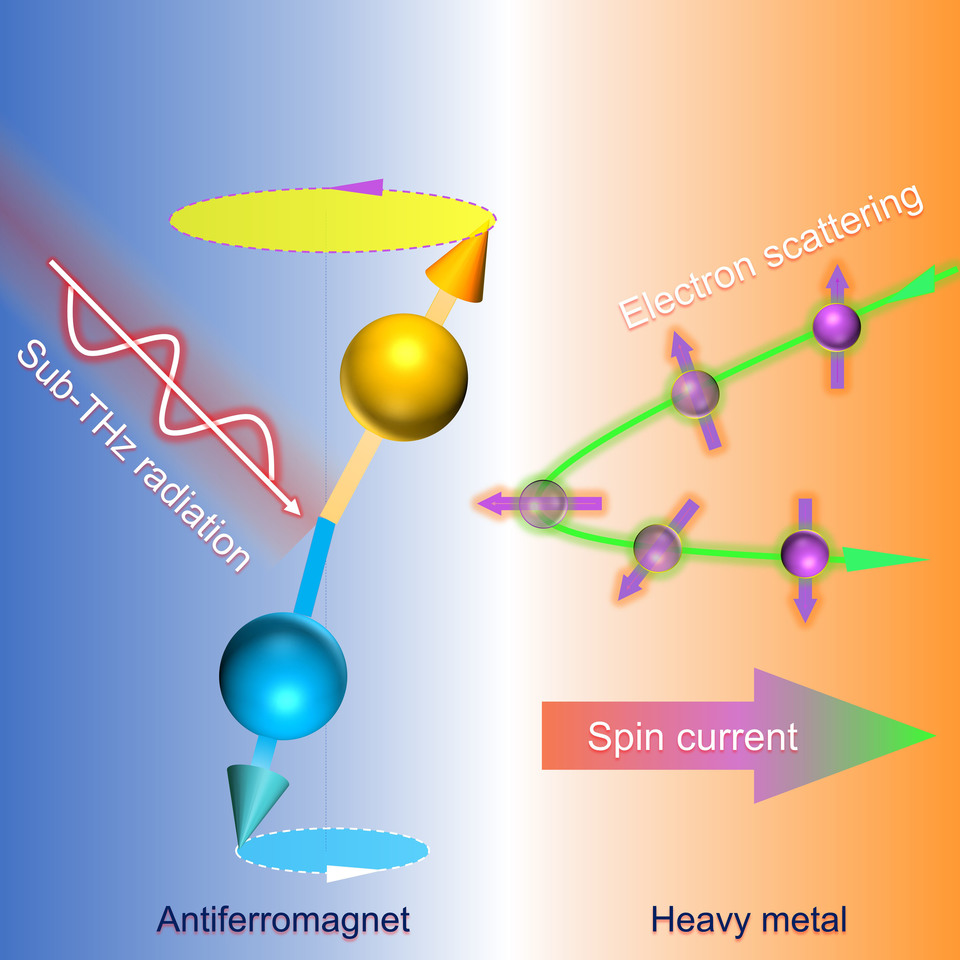 We experimentally demonstrate that a pure spin current can be pumped out from a resonantly excited antiferromagnetic insulator by sub-THz radiation and be detected using heavy metals with strong spin-orbit coupling.