Usually, in-plane orientation is more common for two-dimensional (2D) or layered materials due to the interaction between the face of layered materials and substrates, such as transition metal dichalcogenides and 2D oxide perovskites. Interestingly, OP orientation of quasi-2D OIHPs by solution method is conditionally available, such as hot casting method and additive method for quasi-2D OIHPs with layer number of n>1. However the major driving force for the conditional OP orientation was unknown. On the other hand, the nucleation, crystallization and phase distribution of quasi-2D perovskite crystals could be rather complex since it is polynary system.

1. We proved that the increased crystallinity of the quasi-2D perovskite is resulted from the much reduced nucleation centers during solution thinning process by using NH4Cl additive, which offer larger grain size. For the first time, we demonstrated that NH4Cl additive can suppress the precipitation of PbI2-DMF-contained solvate phase (PDS) in the solution phase, which developed into nucleation centers for 3D-like perovskite and quasi-2D perovskite in the following drying process. Similar effect can be found if replacing NH4Cl with varied additives such as AX salts (A = NH4+ or MA+; X = Cl-, Br- or I-);

Fig. 1. Illustration of preformed PDS and 3D-like perovskites defined nucleation and growth of quasi-2D perovskites from precursor solution without (a) or with (b) excessive AX additives.

The thermodynamically available templated growth of quasi-2D perovskites can be used to construct heterojunction structures with bonding interfaces, which would open up avenues for perovskite optoelectronic devices with functional nanostructures.
More details can be found in our article in Nature Communications (https://www.nature.com/articles/s41467-019-13856-1). 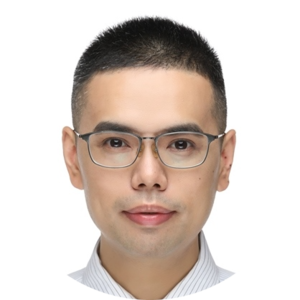