We imaged hydrodynamic electron flow for the first time, observing how electrons can be made to flow through a graphene nanodevice like water through a pipe, with a higher current density at the center than near the walls.

Hydrodynamics is an omnipresent phenomenon in the physical world, dictating the behavior of systems with many inter-particle collisions, such as the flow of classical fluids like water. The possibility of hydrodynamic flow of electrons, fundamental quantum particles, is especially exciting, as such new behavior would be in stark contrast to the long observed property that electrons flow through a material like a gas, either diffusively or ballistically.  From a more practical perspective, one can also imagine engineering new kinds of devices to exploit the nonlocal, viscous effects predicted to arise for hydrodynamic electrons, which might be advantageous for producing low-power, energy-efficient electronics.

The field of electron hydrodynamics dates back at least to the 1960s, when Radii Gurzhi considered theoretically how electrons might flow through a conductor that is free from impurities [1]. Indeed, in order to reach the hydrodynamic regime for electrons, a host material of extreme purity is required so that electrons will scatter off each other at a much higher rate than they scatter from disorder. Advances in the 80s in the creation of high-mobility two-dimensional electron gases (like those made from molecular beam epitaxy of semiconducting heterostructures), enabled Gurzhi’s predictions to be tested experimentally, and in a landmark paper in 1995 by de Jong and Molenkamp [2], signatures of electron hydrodynamics were finally observed in transport measurements of GaAs-based semiconducting wires.

Subsequently, the field largely stagnated for the next twenty years or so, only to be resurrected by the advent of high mobility van der Waals heterostructures such as graphene sandwiched between hexagonal boron nitride, which can be made exceptionally free from disorder. These materials inspired a new generation of researchers to consider the prospect of electron hydrodynamics, resulting in a flurry of activity, both experimental and theoretical. Still, while many new elements of electron hydrodynamics were being uncovered, the vast majority of the experimental work consisted of transport measurements that probe the devices at fixed spatial positions. Hydrodynamics, however, is a fundamentally spatial phenomenon, conjuring pictures of swirling fluids and raging waves (illustrated in figure 1). It was this challenge of actually visualizing the spatial aspects of electron hydrodynamics that initially drew us into the field.

Figure 1. Artist's conception of electron hydrodynamics, illustrated as a river of electrons flowing in graphene. The viscosity generated by the repulsion between electrons (red balls) causes them to flow with a parabolic current density, depicted by the white foam wavefront.

Just as the field of electron hydrodynamics was being revitalized, we were developing a new technique at the Weizmann Institute of Science for imaging electron flow in devices. Using a carbon nanotube single electron transistor as an ultrasensitive detector, we learned how to map the electrostatic potential of the flowing electrons inside a device to microvolt sensitivity [3], which is at least 1000 times more sensitive than other techniques such as Kelvin probe microscopy. Moreover, because our technique is capable of imaging electrons buried under insulating surfaces, across a broad temperature range (cryogenic to 300K), and in nonzero magnetic field, it seemed ideally suited for imaging electron hydrodynamics phenomena in van der Waals structures. We thus initiated a collaboration with the group of Andre Geim in Manchester to combine their state-of-the-art graphene devices with our unique imaging technique at Weizmann. The Manchester group were ideal partners, as they had already established the existence of electron hydrodynamics in graphene through transport measurements of the non-local resistance, and had built a solid theoretical understanding of this phenomenon.

We initially focused our efforts on imaging voltage whirlpools in graphene that were predicted to arise for hydrodynamic electrons, but we soon realized that ballistic effects could easily mimic the hydrodynamic flow we were aiming to study. To understand why this is the case, it helps to first discuss in more detail how the hydrodynamic regime can be accessed experimentally. Electrons in most materials are well-described by Fermi liquid theory, which explains that due to the Pauli exclusion principle, electrons at very low temperature behave essentially as if they are non-interacting, despite being negatively charged. If the electrons are heated, the phase space available for electron-electron scattering increases, and so heating can essentially “turn on” the repulsive interactions. However, electron flow in a typical material is actually dominated by disorder, and consequently electrons will scatter more rapidly from defects and impurities than from each other. This results in most materials obeying Ohm’s law. If a material is instead sufficiently clean, at low temperature electrons can largely flow without encountering any obstacles, only scattering at the device walls/edges. This is the ballistic transport regime, which can be achieved experimentally in materials like high-mobility graphene. If such a ballistic device is heated, then the hydrodynamic regime can be reached in which the rate of electron-electron scattering is much higher than the rate of scattering from impurities or from the device boundaries. Heating too much will introduce phonon scattering, reverting the system to the Ohmic regime.

Therefore, in order to confidently observe the hydrodynamic regime in experiment, we must be able to distinguish it from the ballistic regime from which it emerges. Ballistic electron flow, however, can easily produce complex spatial voltage patterns due to electrons bouncing off the device walls, and can even generate whirlpool-like features that are in fact much stronger than their hydrodynamic counterparts. This realization led us to augment our goal and instead aim for imaging the most fundamental spatial manifestation of hydrodynamic flow, the ‘Poiseuille’ flow profile.

For the experiments described in the paper [4], we flowed a current through our graphene channels under the application of a very weak magnetic field (so as to create a measureable Hall signal without influencing the flow) and imaged the resulting Hall field profiles. An optical image of a representative channel device and a sketch of the scanning measurement is shown in figure 2a,b. At low temperature (T=7.5K), we observe a flat Hall field profile consistent with ballistic transport (figure 2c). At elevated temperature (T=75K), we observe a strongly parabolic profile, indicating the transition to hydrodynamic flow (figure 2d). Moreover, because in the hydrodynamic regime the Hall field is equivalent to the current density, this measurement is actually the first image of Poiseuille flow of electrons. In the paper, we further explore the full temperature and carrier density dependence of the Hall field curvature, demonstrating how hydrodynamic electron flow evolves from ballistic flow.

For a different take on the work, check out the Nature News & Views feature here: Electrons in graphene go with the flow. 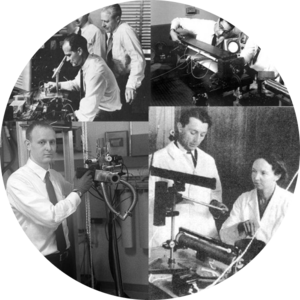 PhD in physics from Stanford University, now in the department of Condensed Matter Physics at the Weizmann Institute of Science, researching new ways to image electrons in nanoscale devices and quantum materials.
Follow