A first-principle mechanism for particulate aggregation and self-assembly in stratified fluids.

We recently discovered a new self-assembly mechanism for particles suspended at similar heights within a density stratified fluid which ultimately produces, through a sequence of jig-saw puzzle steps, a large aggregate of particles in the shape of a disc.
Richard M. McLaughlin
Professor and Chair of Mathematics, University of North Carolina at Chapel Hill
Follow

Aggregation of matter, common in stratified fluid systems, is essential to the carbon cycle and ocean ecology. Although the current understanding of aggregation involves only collision and adhesion, here Camassa et al. reveal a self-assembly phenomenon arising solely from diffusion-induced flows.

The story of how we stumbled upon this discovery is quite amusing:  We have been studying how sinking or rising particle clouds are affected by the presence of stratification. Typically, we experimentally set up these layers by first pouring dense, salty water into a tank, and then slowly filling it with fresh water.  This results in what we call a two-layer stratification: light fluid sits on top heavy fluid, and there is a sharp, but continuous variation of salt concentration connecting the two layers.  See the video clip below for a quick orientation on the actual setup:

There are a lot of interesting phenomena associated with how matter moves through such an environment.  For example, many years ago we established (see ref 1 below) a strange behavior for a sphere falling from the top to the bottom of this setup:  spheres which are slightly denser than the bottom fluid, may actually stop falling, and actually start to rise for a short timescale before ultimately falling to the tank bottom.  The mechanism involves the fact that buoyant fluid is dragged from the top into the bottom, and also coats the sphere, and this provides the extra buoyancy to hold the sphere for a transient timescale.  If the experiment is performed with thousands of very small spheres (50 micron radii), these effects are amplified, leading to the formation of a suspended particle cloud until the enough fluid coating the spheres diffuses away,  so that this cloud will start raining particles.  We often perform outreach demonstrations of this behavior in our UNC Joint Fluids Laboratory, for visitors to UNC, tours for K-12 students, etc.

On one such tour, we asked a former graduate student to set up this particular demonstration.  A mistake was made: the lower layer fluid’s density was too salty, and when we ran the demo, the trapped particle cloud never sank.  So the demo failed to demonstrate the particle rain-out phase.  The student felt bad, and we offered to do the cleanup.  Maybe it was something magical in that tank, or maybe it was simple laziness on our part, but we decided to leave it overnight, and postpone the cleanup till the morning.  Turns out to be the greatest lazy decision ever:  the next morning we came to clean up the mess, and eureka! All the particles had come together overnight forming a very large clustered disc.  We immediately recognized the basic physics, and then set out for several months of research to isolate the physical mechanisms giving rise to this clustering phenomena, resulting in research now just published at Nature Communications here:

Leaving the experiment over night was truly key:  the particle motion speeds are quite slow compared to our earlier experiments (cm/sec in the old experiments versus 1-20 micron/sec in these new experiments).  These new experiments take hours to days to perform, and it was really fortunate that we left the failed demo overnight.  Of course, we needed to spend an intense couple of years to model the underlying physics, and solve the resulting mathematical equations capable of quantitatively predicting the behavior.

The basic physical explanation lies in what is called a diffusion induced flow, and combines in a complex way the shape of the body and fluid through the boundary conditions.  The bodies we use cannot absorb salt, and as such the boundary condition on the surface is no-flux.  In the absence of a boundary, isolines of concentration will be horizontal.  But with a body, because of the no-flux condition, they must intersect the object at a right angle.  This results in bending the isolines near the body, pulling fluid into regions where the ambient fluid has a different density, which then creates a flow as the pulled fluid tries to regain its neutral buoyancy location.  See this a short video for a demonstration of this:

This isoline bending phenomena was first discovered in 1970, independently by Phillips (ref 2 below) and Wunsch (ref 3 below) for a flat tilted plane.  For the case of an infinite, tilted plane, they actually wrote down a mathematically exact solution of the governing  (Navier-Stokes) equations coupled to an advection diffusion equation for the salt concentration in the presence of a stable, linear background salt concentration.  This solution demonstrates a shear flow up the wall, in a narrow boundary layer near the plane.  Of course, the behavior even for a single sphere is much more complicated. For the experimental parameters we study, the flow requires numerically simulating the underlying nonlinear partial differential equations.  Those simulations for a single sphere reveal a toroidal flow, with converging flow along the equatorial plane and ejection at the poles.  Amazingly, these toroidal flow structures are truly realizable in the fluid.  Particle Imaging Velocimetry performed on a single oblate spheroid is compared directly to these simulations in a linear background density field in the following figure:

Since these bodies are symmetric, they cannot create propulsion alone, but when a nearby particle at similar height encounters such a flow, it will move with its surrounding fluid and experience an attractive force.  If you scale up the phenomenon to thousands of particles, the mechanism amplifies as the aggregate disc size grows.  We were able to modify an open access Stokesian dynamics code to include these new pairwise attractive forces to run a full simulation which captures many of the self-assembly experiment's features.  The following video shows the simulation compared to the experiment.  In particular, physical system’s ability to solve jig-saw like puzzles on its way to forming a large-scale aggregate are captured by our simulations.

Many open questions remain, including how particles of different sizes, shapes, and densities will interact.  This process may well be at play in many physical and biological systems, such as how food sources organize in bodies of water, or how microplastics are distributed in oceans. 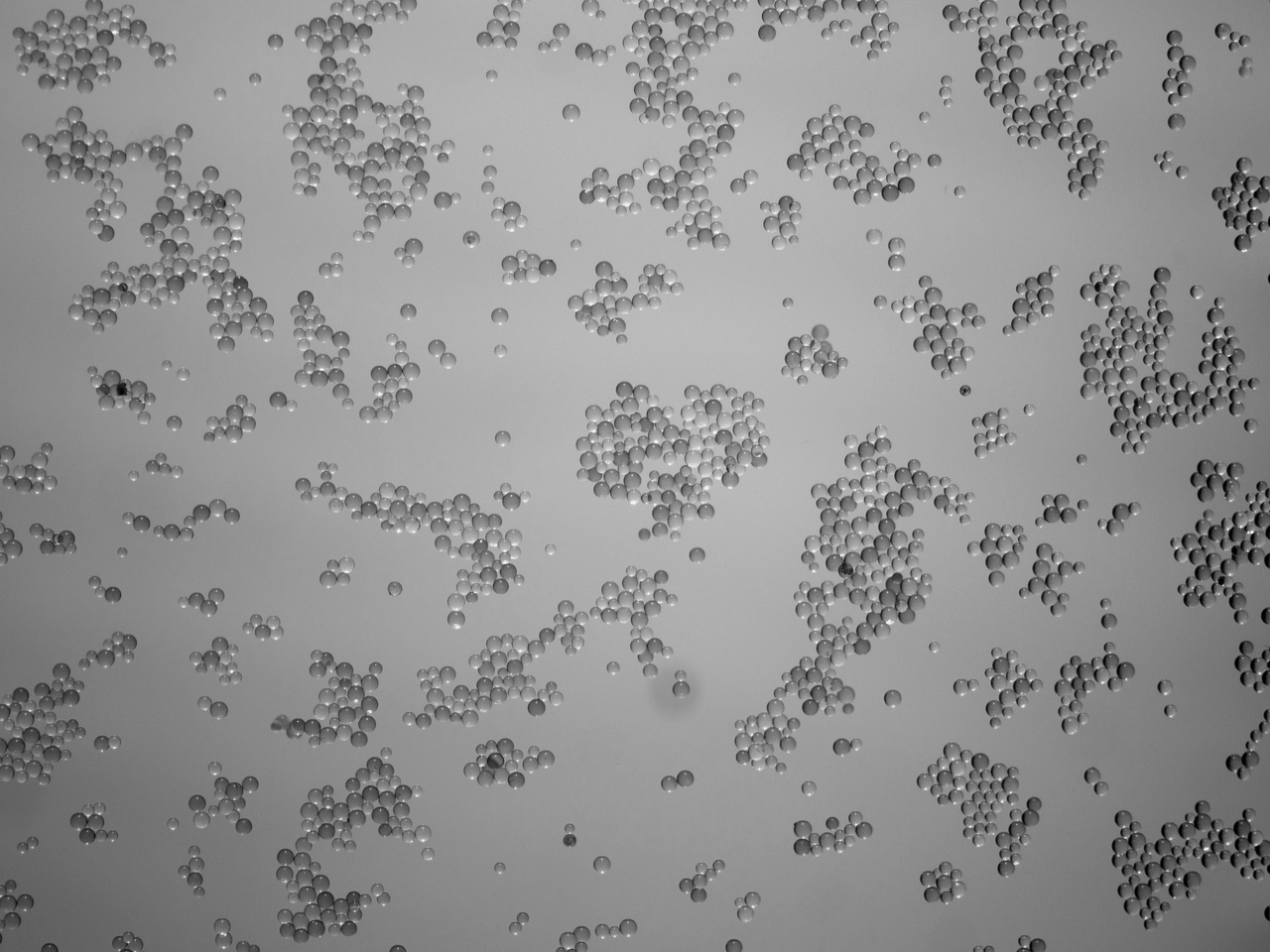 A first-principle mechanism for particulate aggregation and self-assembly in stratified fluids.

We recently discovered a new self-assembly mechanism for particles suspended at similar heights within a density stratified fluid which ultimately produces, through a sequence of jig-saw puzzle steps, a large aggregate of particles in the shape of a disc.